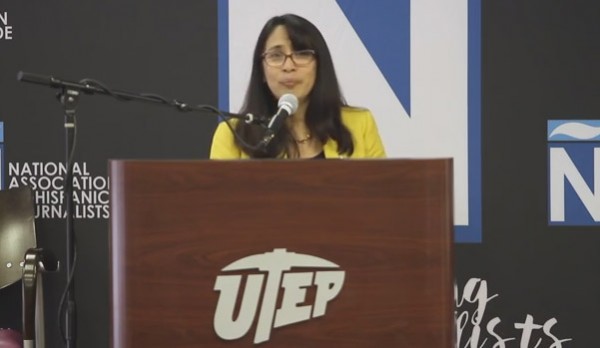 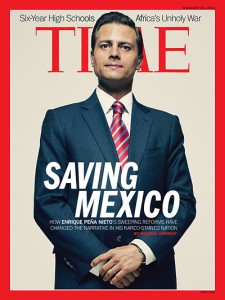 There he was, a man whose political party was caught buying votes and still won the presidency, a man interconnected with ex-President Carlos Salinas de Gortari, who had one of Mexico’s most tarnished presidencies in history. This man Peña Nieto, the current president of my home country, is not someone I could ever trust. Setting aside the fact that his so called reforms jeopardize the entire country, disregarding the fact that after 75 years of sovereignty he is selling out our oil reserves to foreign investors, my immediate disgust shifted toward the TIME publication and the article written by one of their chief foreign correspondents, Michael Crowley. 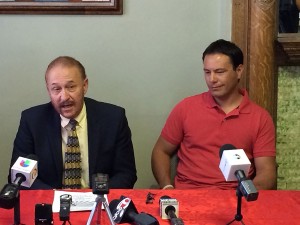 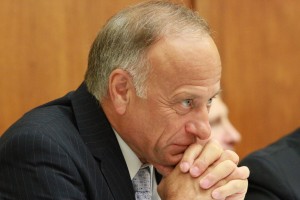 WASHINGTON — Reaction by leaders of both the Republican and Democratic parties, as well as Hispanic and civil rights organizations, has been swift, strident and steady this week in answer to anti-Hispanic comments made by U.S. Rep. Steve King of Iowa. Responding to DREAMer supporters’ contentions that the contributions and potential of tens of thousands of undocumented Latino youths are undervalued, the six term Republican Congressman told the conservative Website Newsmax July 18 that for every “illegal immigrant” who becomes a valedictorian, “there’s another 100 out there that weigh 130 pounds and have calves s the size of cantaloupes because they’re hauling 75 pounds of marijuana across the desert.”

Fellow Republican Raúl Labrador of Idaho quickly characterized King’s comments as “irresponsible and reprehensible,” adding, “I hope that if he thought about it, he wouldn’t say such a thing again.”

But he already has. Since then, King has elaborated in a July 23 Radio Iowa interview with O. Kay Henderson , “It’s not something that I’m making up. This is real. We have people that are drug mules…You can tell by their physical characteristics what they’re doing for months, going through the desert with 75 pounds of drugs on their back.”

“What he said is wrong. 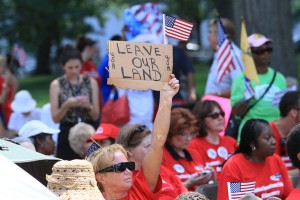 WASHINGTON – With the U.S. Senate-passed immigration bill facing political limbo in the U.S. House of Representatives, conservative factions are voicing their opposition loudly here before any compromise can be reached. Travel buses full of mainly older white attendees, from mostly southern states, representing the Tea Party Community group along with the Black American Leadership Alliance (BALA) spearheaded by Leah Durant gathered here at Freedom Plaza recently during the “March for Jobs” rally. They carried homemade anti-immigration reform signs demanding “No Amnesty”, “American Jobs are for Americans”, “Close our Borders” and simply, “Deport.”

“All Democrats and all Independents in the Senate believe that there ought to be Amnesty, a handful of Republicans believe that also,” U.S. Representative Steve King a Republican from Iowa told them. “Whatever our heart says about people that want to be Americans but sought about doing it the illegal way, we can’t give them that legal status without sacrificing the rule of law.”

Braving the scorching heat, close to 1000 demonstrators led by King marched along Pennsylvania Ave. toward Capitol Hill’s upper Senate Park chanting slogans like “Kill the Bill” (referring to the Senate immigration bill 744) and “Hey, hey, ho, ho, the Gang of Eight must go.” The drafters of the bill are known as the Gang of Eight. 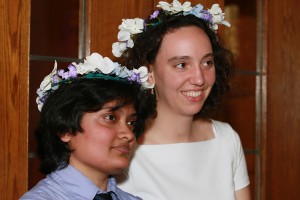 WASHINGTON – In the quaint and inconspicuous Lutheran Church of the Reformation, situated right next to the Supreme Court, a wedding is about to take place. A crowd of media, LGBT advocacy groups and hundreds of National Immigrant Youth Alliance (NIYA) DREAMers, begins to find its way to the seats, setting aside signs and banners. The couple arrives minutes later. The bride is wearing a slim-fitting white dress, while the groom is sporting a blue tie and shirt. Both are wearing white flower tiaras. 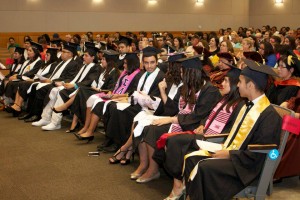 Across U.S., graduating Hispanic college classes add ethnic flourish with celebrations of their own

WASHINGTON — At campus auditoriums and chapels around the country, thousands of Latino and Latina college students are organizing and staging elaborate commencement ceremonies this spring to honor their graduates at all levels, from associate degree recipients to Ph. Ds. These cap-and-gown ceremonies, many with mariachi and danza folklórica accompaniment, supplement the more traditional solemn diploma delivery lines to an estimated crowd of several thousand Latino recipients this year. Tamales and lechón asado expand the cake-with-the-frosting menus offered attending families and friends. A few of Latino celebrations trace their humble roots back half a century or more. 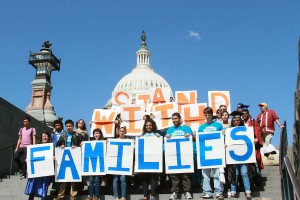 WASHINGTON – A group of college students dressed in blue graduation gowns sit in a gallery during a U.S. Senate hearing, their eyes fixed on the Senate floor, watching attentively as a steady stream of yay votes are tallied and read out loud by the clerk. They’re not the usual student visitors on a school-sanctioned field trip to the Capitol – they’re DREAMers and the vote they are witnessing will ultimately decide the legality of their residency in this country. The Senate Bill 744: Border Security, Economic Opportunity, and Immigration Modernization Act more commonly known as the Immigration bill, passed its first hurdle June 11 on an 82-15 vote, with 54 Democrats and 28 Republicans voting to move the bill to the floor. With congressmen all around Washington voicing their opinions to anyone who would listen, the DREAMers sought to place a human face on immigration and let them know the repercussions of their rhetoric. The students are members of United We Dream (UWD), a nonpartisan network made up of 52 affiliate organizations in 25 states, and one of the largest immigrant youth-led organizations in the nation. 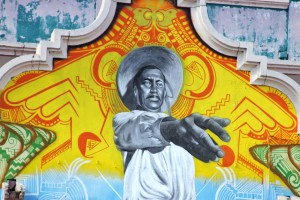 CD. JUAREZ – Driving through downtown Juárez has always been somewhat of a treat for me. The sights and sounds of the everyday hustle and bustle, the lingering aroma of what can only be defined as tradition, and the looming sense of that which is no longer there. Yet what most captivates me to this day are the numerous decaying buildings situated in one single area. These remnant monoliths weathered down by the years serve as a reminder of my city’s heritage, a heritage that I never fully knew. 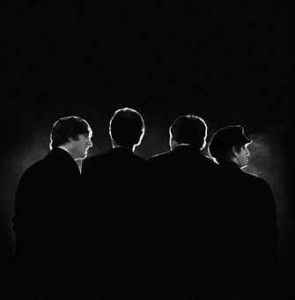 EL PASO – A sense of adventure, a camera and a little bit of luck marked the beginning of a young photographer’s career, tools that paid off nearly 50 years later for Mike Mitchell. At the age of 18, Mitchell was living in Washington, D.C, and starting his career as a photojournalist. Having already developed a love for photography in his early teens, he set off to do what naturally comes next –find a way to get paid for doing what he loved. In 1964 he began an internship at the Washington Star newspaper and also did freelance photography for magazines and other publications. That year also saw the first Beatles U.S. concert tour. 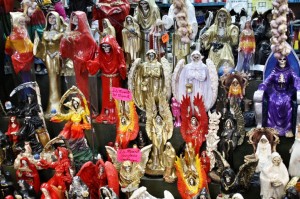 Just a few steps from the historic cathedral devoted to the Virgin of Guadalupe in downtown Juárez, the Mercado Cuauhtémoc shopping center houses stores that specialize in the sale of paraphernalia dedicated to a different holy entity they call Santa Muerte. Like any Sunday, the main plaza and its different mercados in the historic heart of the border city of Juárez are rich with activity and flowing with movement. This is in complete contrast to other sectors of the city where businesses are run down or abandoned, lacking clientele, who fear the violence currently plaguing the city. These shops dedicated to the sale of various goods depicting Santa Muerte – the Saint of Death or just Holy Death – are mixed in with other shops that sell everything from produce and clothing, to electronic goods. In these shops you can find statues and amulets adorned with the saint’s image and you also can say a prayer to her in one of the mini-worship spots set aside in the shops to venerate  “La Huesuda” or “the skeletal saint” as it is also known.

EL PASO — Under the umbrella ideal of fostering a new era of bi-national collaboration between the U.S. and Mexico, the University of Texas at El Paso was once again home to the annual Border Security Conference. This two-day event marked the 8th straight year public officials, politicians, scholars and the general public gathered to share concerns, progress, and ideas pertaining to border security and how the border should meet 21st. century challenges. The conference was a joint endeavor of the University and the Office of U.S. Representative Silvestre Reyes (D.,Texas). “It is terrific to have the opportunity to host this conference.