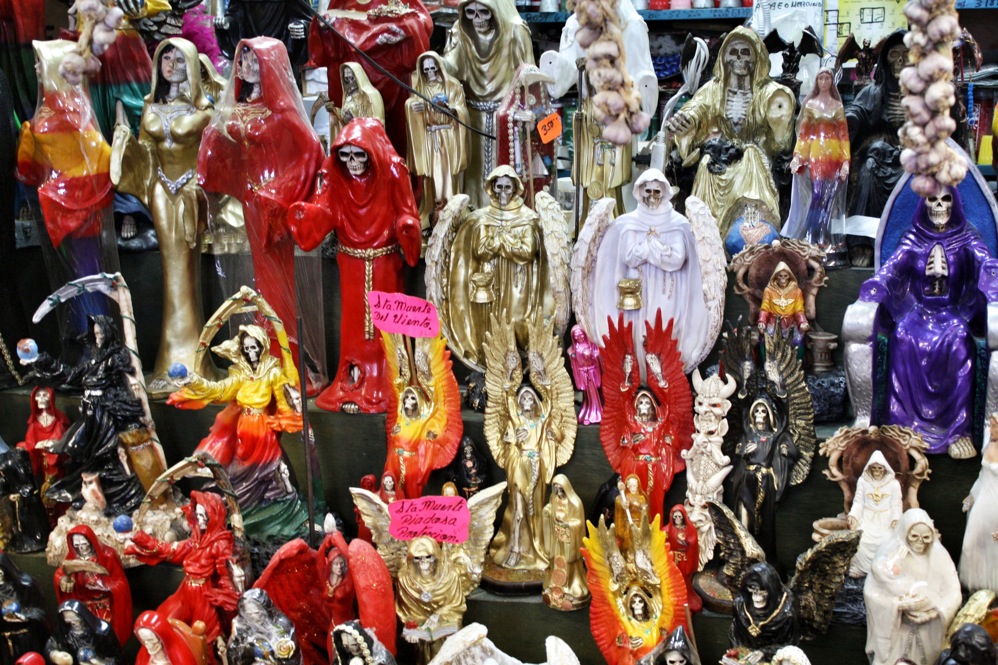 The devotion to the Holy Death incorporates many elements from Ctaholic Church's iconography even though this is not recognized as legit by the Church. (Luis Hernandez/Borderzine.com)

Just a few steps from the historic cathedral devoted to the Virgin of Guadalupe in downtown Juárez, the Mercado Cuauhtémoc shopping center houses stores that specialize in the sale of paraphernalia dedicated to a different holy entity they call Santa Muerte.

Like any Sunday, the main plaza and its different mercados in the historic heart of the border city of Juárez are rich with activity and flowing with movement.

This is in complete contrast to other sectors of the city where businesses are run down or abandoned, lacking clientele, who fear the violence currently plaguing the city. The devotion to the Holy Death incorporates many elements from Ctaholic Church's iconography even though this is not recognized as legit by the Church. (Luis Hernandez/Borderzine.com)

These shops dedicated to the sale of various goods depicting Santa Muerte – the Saint of Death or just Holy Death – are mixed in with other shops that sell everything from produce and clothing, to electronic goods.

In these shops you can find statues and amulets adorned with the saint’s image and you also can say a prayer to her in one of the mini-worship spots set aside in the shops to venerate  “La Huesuda” or “the skeletal saint” as it is also known.

A small private altar, discreetly hidden behind a thin purple curtain, awaits patrons who wish to worship the saint, sharing their personal pleas, prayers and hopes with it.

“People ask it for help finding a job, love, protection and good health,” says the owner of a shop that also sells more “traditional” religious merchandize.

The inner walls of the small altar-room are covered with offerings, from cigars, candy, photographs of dead loved ones and other trinkets designed to thank the saint for its assistance.

For some time now, the sales of the Santa Muerte have greatly surpassed those of more traditional figures, like that of Christ and the Virgin Mary and other saints officially recognized by the catholic church, said the owner of several of these shops, who wished to remain anonymous. “I have sold this type of merchandize for more than a decade now,” he said.

With some satisfaction in his voice, he described how his business hasn’t been affected by the current violence. He attributes this to the fact that people who still visit the city of Juárez have kept up a steady demand for religious iconography.

“People ask me how is Juárez? Can they come and visit? And I tell them that anybody can come over, but if you sell drugs, it’s best that you stay away, because you will get screwed, crossing the bridge you will be killed … but if you don’t do anything like that, well I tell them to have no fear and come on over,” he said.

An El Pasoan who collects statues of the Santa Muerte claims that they have given him needed support during turbulent times. “I have been loyal to her for six years.  She has been a strong provider for me and I remain very close to her,” said the young man, who preferred to remain anonymous.

“I had a very difficult moment in my life. I searched for help, which lead me seek out assistance from the church, but to no avail. Later I got closer to the faith of the Santa Muerte. I made her an altar in my home. I began with a simple candle to which I asked for help.”

He said his newfound faith in the Santa Muerte has helped him survive many hardships. “She is here to help us; she isn’t evil like many people think, on the contrary, she is a very majestic saint who wishes to help us all,” he said.

The Mexican culture has always maintained strong ties with the notion of death and figurines of death motifs, a custom that goes as back to pre-Colombian times. This tradition places Santa Muerte close to popular culture.  It is not only a figure associated with Mexican and Colombian drug cartels.

The image of the Santa Muerte has been wrongfully associated exclusively with the “narco-cartels” that plague the city of Juárez because drug dealers seek her protection from rival cartels and from the Mexican police.

The Mexican Catholic Church has condemned the worship of the Santa Muerte, and cataloged it as mere superstition, an idea popularized by musical trends and false idolization of saints not officially recognized by the church.

“I don’t know whom they would be worshiping,” said the archbishop of the Juárez Diocese, Renato Ascencio León, after concluding a sermon.

The bishop said that death is the absence of life. “I don’t understand the reason behind worshiping something which has no life. Christ died for us, and with his death he conquered life for us. In Christ, death does have reason,” he said.