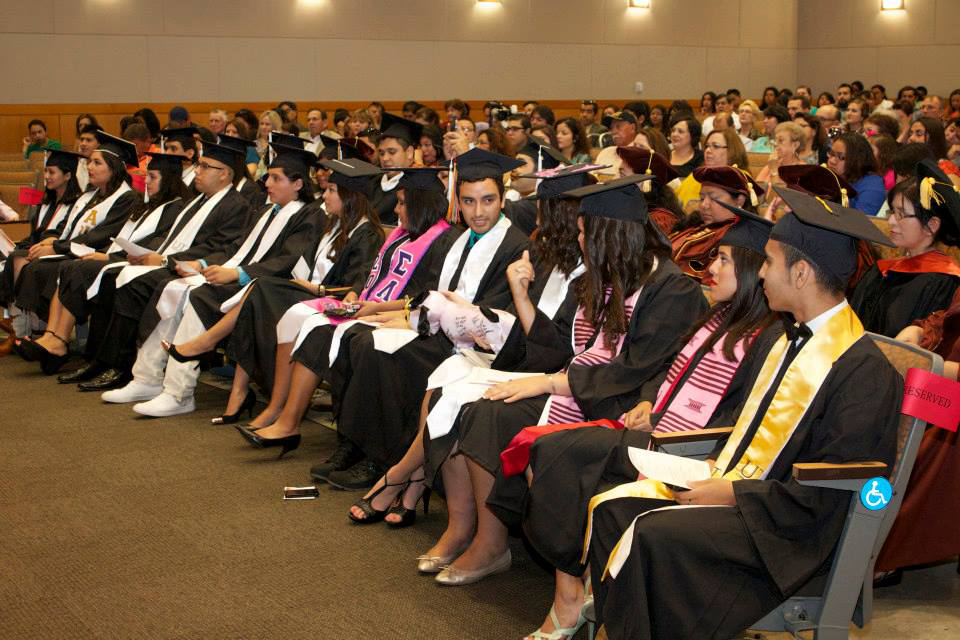 WASHINGTON — At campus auditoriums and chapels around the country, thousands of Latino and Latina college students are organizing and staging elaborate commencement ceremonies this spring to honor their graduates at all levels, from associate degree recipients to Ph. Ds.

These cap-and-gown ceremonies, many with mariachi and danza folklórica accompaniment, supplement the more traditional solemn diploma delivery lines to an estimated crowd of several thousand Latino recipients this year.

A few of Latino celebrations trace their humble roots back half a century or more. Many receive financial and other material support from their own higher education institutions, alumni associations and communities.

This growing tradition highlights the accomplishments of Hispanic graduates in nearly every state, the U.S. territory of Puerto Rico, Spain and students representing most all of the two dozen Hispanic nations spread throughout South and Central America and the Caribbean.

They crown the struggles shared by family and friends who helped them along their college years. Recent University of New Mexico graduate Katrina Sweetland, whose mother emigrated from Ciudad Juárez, México, chaired its “Raza Graduation” program for 110 students celebrating its 21st anniversary. Nearly a thousand family members and friends showed up at the UNM ballroom.

These commencements compliment the schools’ official cap-and-gown graduation walks. In most universities Latina and Latino students are provided with graduation stoles which distinguish them as Latin American students. Such is the case at Arizona State University which adorns students with a traditional “Hispanic convocation” sash. Family and community was the unifying theme.

UNM political science graduate Miranda Aragón recalls how the familial atmosphere augmented the usual pomp and circumstance. “It was a place for celebrating families more than students.”

This year the University of Texas at Austin held multiple bilingual ceremonies which focused on the growing Latino population on campus. The Center for Mexican American Studies celebrated its 17th year while the student organization Latino Leadership Council hosted its first.

“Students who walked across the stage to pick up their certificate were encouraged to bring two members of their family along with them,” said Ana Ixchel Rosal, interim director for its Multicultural Engagement Center.

At California’s Fresno State University, where former U.S. Secretary of Labor Hilda Solís was the commencement speaker, 1,100 Hispanic students graduated, with most joined in a separate Latino commencement ceremony that attracted more than 12,000 students, family and friends to a nearby stadium, where they were entertained by the folkloric “Los Danzantes de Aztlán” and other Latino stars.

“We as Latinos struggle to get here,” said Jesse Mejía, a Latino motivational speaker who keynoted the University of Maryland’s bilingual Latino event. “I understood the sensibility of incorporating Spanish into my speech because not all the parents or family members in attendance spoke English,” Mejía told Hispanic Link.

Sylvia Puente, executive director for the Latino Policy Forum, was the guest speaker at the University of Illinois at Urbana-Champaign’s 34th Latino commencement.

“I was privileged to tell the graduating class that I was part of the very first Latino graduation held on campus.”

Back then, there were five Latino graduates. This year 100 filled the auditorium with their families and friends.

“My message was on how every single one of them has the capacity to give back. Every one of them can go back to their grade school and speak to students about the importance of getting a college education,” Puente said.

The idea of giving back to the community is something many students had in mind. Such was the case of Roy Banks, who graduated at age 68.

Roots go back to Spain He continues to explore his Latino roots reaching back to Spain. After serving in the Navy and holding a variety of jobs in New Mexico and California, he graduated from UNM’s Class of 2012 with a bachelor’s degree in university studies.

“I received so much help from [UNM’s] Centro de la Raza, I wouldn’t have been able to pull any of this off if it weren’t for them.”

Banks plans to pursue a Master’s degree in social work at Highland University in Albuquerque. “My ultimate goal is working with the Hispanic community…With a Master’s degree I plan on opening a long-term, low cost treatment center for people with chemical dependency and behavioral problems.”

With constantly shifting statistics in graduation and dropout rates for Latinos, these collegiate celebrations are providing students with an opportunity to motivate generations to come.