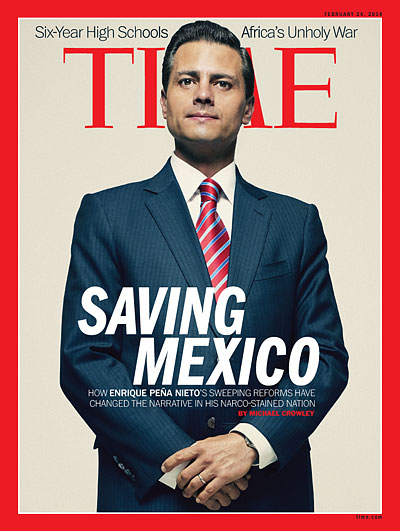 There he was, a man whose political party was caught buying votes and still won the presidency, a man interconnected with ex-President Carlos Salinas de Gortari, who had one of Mexico’s most tarnished presidencies in history. This man Peña Nieto, the current president of my home country, is not someone I could ever trust.

Setting aside the fact that his so called reforms jeopardize the entire country, disregarding the fact that after 75 years of sovereignty he is selling out our oil reserves to foreign investors, my immediate disgust shifted toward the TIME publication and the article written by one of their chief foreign correspondents, Michael Crowley. Cover edits “More likely to Save Mexico” by Luis Hernandez. Popular folk heroes of Mexico who have more of a chance of “saving” the country than Peña Nieto. Osito Bimbo de Pan Dulce Bimbo. (Illustration by Luis Hernández/Borderzine.com)

As I read Crowley’s words they immediately felt empty, his introduction padded, soft, safe. He talks about how global economic forces have shifted attention towards Mexico, “a booming Mexico.” The entire piece read like a public service announcement disguised as a journalistic piece of writing, and as I kept on reading other articles about the controversy I found out why.

According to EnLaPolitika.com, which found out through a Freedom of Information request for Mexican federal expense reports, Time Warner, Inc., the owner of TIME Magazine, received two payments from the current Mexican federal administration in charge of publicity and social communication campaigns. To my mind, this questions the validity and ethical practices of the long running magazine with an annual circulation of more than 3,000,000 copies.

Crowley took to twitter to try to save some face. He posted: “Dear Mexican friends: Read the story. It doesn’t say that either Mexico or EPN are perfect. Addresses corruption, cartels, reform backlash.” But what he fails to mention is that Time Warner, Inc. received money from the Mexican government.

The headline prompted many to flood social network sites with their concerns and contempt; several have taken a creative approach by altering the cover page. Some have dressed Peña Nieto as the Grim Reaper, or as the Virgen de Guadalupe, Chapulín Colorado and other Mexican characters. While others have decided to tweet their concerns to the writer @CrowleyTIME and offer him ideas on possible rewrites for his story.

The now notorious magazine cover of EPN hit newsstands on February 24, but sadly for Latin Americans, only in the international version of TIME Magazine, which only circulates in Europe, Africa, Asia, the South Pacific and the Middle East. The U.S. version contains the story but opted for a more hopeful cover of a high school student graduating with the headline, “The diploma that works.”