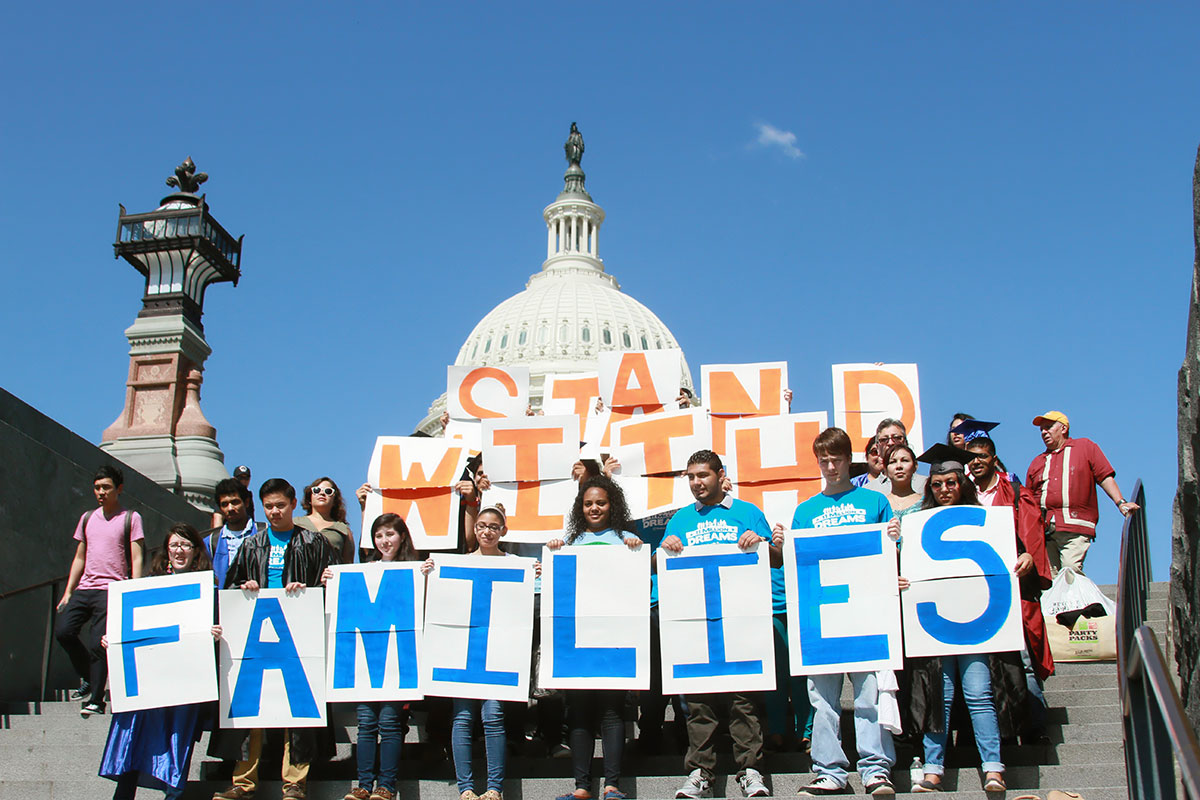 "Stand with families" was the clamor of students members of United We Dream. (Luis Hernandez/Borderzine.com) "Stand with families" was the clamor of students members of United We Dream. (Luis Hernandez/Borderzine.com)

WASHINGTON – A group of college students dressed in blue graduation gowns sit in a gallery during a U.S. Senate hearing, their eyes fixed on the Senate floor, watching attentively as a steady stream of yay votes are tallied and read out loud by the clerk. They’re not the usual student visitors on a school-sanctioned field trip to the Capitol – they’re DREAMers and the vote they are witnessing will ultimately decide the legality of their residency in this country.

The Senate Bill 744: Border Security, Economic Opportunity, and Immigration Modernization Act more commonly known as the Immigration bill, passed its first hurdle June 11 on an 82-15 vote, with 54 Democrats and 28 Republicans voting to move the bill to the floor.

With congressmen all around Washington voicing their opinions to anyone who would listen, the DREAMers sought to place a human face on immigration and let them know the repercussions of their rhetoric.

The students are members of United We Dream (UWD), a nonpartisan network made up of 52 affiliate organizations in 25 states, and one of the largest immigrant youth-led organizations in the nation.

“We really want to show our presence at the Senate Gallery,” said Maricela Aguilar, D.C. organizer for United We Dream, “I think a lot of these Senators talk about our communities and they give numbers and statistics and so we want to be there so they have a face, and a person they could look at when they are saying these things and having the vote.”

Aguilar added that they want to hold the legislators accountable for their words and votes. “Because it’s really easy for them to vote a certain way or say certain things when someone’s not there; we want to make sure that doesn’t happen.” DREAMers want to show their presence at the Senate. (Luis Hernandez/Borderzine.com)

The DREAMers marched up to the Capitol building and launched their campaign by chanting, “We are the DREAMers, the mighty, mighty DREAMers, fighting for justice, and an education.”

They posed for a group photo on the Senate steps, holding on to signs that would have spelled out “Stand with Families” referring to their fight for family unification and an end to mass deportations, but they were quickly informed by a security officer that protests required a permit.

Not easily discourage, they lowered their signs, posed for a “normal” photograph, and walked to another set of steps far from the security guards gaze and proudly held up their signs.

Their next move was to head to the Dirksen Senate office building with a list of 15 Republican senators who voted against the motion to proceed on the bipartisan immigration bill. Names like John Barrasso (R-WY), Michael Crapo (R-ID), Ted Cruz (R-TX), Mike Enzi (R-WY), Jim Inhofe (R-OK) and Mark Kirk (R-IL) to name a few.

The DREAMers split up into groups and visited the Republican senators, chanting along the way, “Who’s streets? Our streets! Who’s Congress? Our Congress! Who’s Senate? Our Senate!” All the while, receiving positive reactions from crowds of onlookers.

“We are for family reunification, stopping senseless deportations and enforcement and keeping families together,” said UWD organizer, Juan Pablo Orjuela, to his team. “We will drop off our mission statement and vision and what we want to see in the bill, what we are going to organize for, what we are going to fight for.”

None of the senators on their list were present that day.  Instead they met with staff press secretaries, immigration staffers or other slightly bewildered aides.

“It’s the only way to keep in contact with them,” said Francisco Curiel, UWD member and a undocumented student, “We ask for their business cards, send them emails; we want to know their position on key immigration issues.”

Their next move was meeting up with Representative Luis Gutierrez (D-IL) who, with the help of many other Democratic and Republican senators, has championed the cause of stopping deportations and the separation of families.

“We [Latinos] were a priority during the election,” said Gutierrez, “We should also be a priority now.” The senator is known for his exuberant speeches and rallying with advocacy groups that deal with family unification.

“President Obama should use his executive powers to stop the deportations now, just like he promised; 1400 people are separated or deported every day,” he added.

DREAMer Yves Gomes, from the Maryland branch of UWD met with the congressman and voiced his concerns about the separation of families.

Gomes’ family came to this country in 1994, when he was one-year-old. His father and mother moved from India to the U.S. in search of a better opportunity for their children.

“The reason I fight for immigration, the reason I fight for families like all of you is because I know the pain of what it feels like to be separated,” added Gomes. “My parents lived here, they did all the right things, they paid their taxes, they contributed to the economy, they gave back to our community, they were active volunteers in church, but in the end, none of that made a difference.”

In 2006 Gomez’s parents’ immigration case was denied and subsequently he found himself undocumented, and in 2008 his father was pulled over for a minor traffic violation, a broken taillight. “And that’s the last day I ever saw them. I haven’t seen my parents for five years. My mother was a college professor working on her PhD in computer science. My father was just a hardworking man, just like many of your parents, who did not have a great job. He worked at a hotel, and worked 10-12 hour shifts so I could have a comfortable life,” he added. The DREAMers continuing with their goal of confronting senators came up with more elaborate ways of addressing their concerns. Such was the case with Senators John Cornyn (R-TX) and “Gang of 8” member Marco Rubio (R-FL).

Rubio was not on hand to receive his surprise visit but his aides were treated with a small manifestation, each and every one of the DREAMers hand-delivered a pair of flip-flops or “chanclas” as they are known in Spanish.

“The symbolism behind it is twofold,” said Julieta Garibay, Legislative Affairs for UWD. “In Spanish it means that when you misbehaved you would get a chanclaso from you mom to set you straight, and we feel that many immigrant mothers want to remind him about his commitment to immigrants; his own mother told him not to mess with immigrants and it’s obvious that he has forgotten. He is an author of the immigration reform bill but one day he’s in favor of it and another he is hesitant.”

And in that hesitation is were the second meaning behind the chancla protest lies, “Stop being a flip-flop, these are our lives you are talking about,” added Garibay.

“Rubio voted on the Cornyn amendment; thankfully it didn’t pass, but he did vote on this which shows that he is not really with the immigrant community,” said DREAMer Evelyn Rivera, National Coordinating committee member for UWD, “Seeing that his is not really representing our community is really frustrating for me, as a Floridian, as a DREAMer, as someone who feels extremely American, I don’t feel he is representing me at all for a long time now.”

Rivera was part of Operation Butterfly earlier this month, which reunited DREAMers with their mothers at the Nogales border in Arizona. “It was a very joyous moment but also a very hard moment. I actually panicked while I was in the car, realizing that this was going to be the way I was going to see my mom for the first time.”

She went on to say that the gathering was not how she expected to reunite with her mother, “I knew it wasn’t going to be like I had imagined, of me being at the airport, pushing my luggage, dropping it and running towards her, but instead it was me running to the border and hugging her with this fence between us.”

“Not knowing when will be the next time I get to see my mom, just treasuring those 12 hours that I had with her and those pictures I was able to take on my phone and remembering how it felt to be able to hug her again and trying to hold on to that feeling, I’m using that to keep pushing forward, to keep fighting,” added Rivera.

Sen. Cornyn who gained notoriety for his proposed amendment to the bill placing a greater emphasis on strengthening border security was met by the DREAMers dressed as “Undocuheroes.” Using their graduation gowns as capes and brandishing a “U” on their chests they marched into the Texan Senators office in order to share their stories and deliver a villain outfit, only to be greeted by his staff.

“I think what he needs to understand [Cornyn] is that this is not a negotiation of bills and amendments, this is a negotiation of our lives,” Garibay told Cornyn’s press secretary Drew Brandewie.

The DREAMers also took some time to recognize their victories, by celebrating the one year anniversary of the implementation of the Deferred Action for Childhood Arrivals (DACA), which made it possible for many young immigrants who came to the United States as children to live legally in the country and have access to permits and are free from the possibility of deportation.

“I was undocumented for 11 years,” said DREAMer Yenny Quispe, NY leader of Make the Road DACA implementation, “last year a lawyer told me I qualified for DACA but that I also qualified for something better, which is a special immigrant juvenile status; that changed my whole life.”

Quispe, originally from Peru, was able to reunite with her grandmother after 11 years. “That’s what immigration reform looks like, family reunification.” Adding that “even though you don’t know if you qualify for DACA you should really go to one of the organizations that are helping and figure out, there might be another relief for you out there; so please go out and apply for DACA, because this is just the beginning, because we haven’t won, because we still have to fight for our families.”

DREAMers want to show their presence at the Senate. (Luis Hernandez/Borderzine.com)

“Stand with families” was the clamor of students members of United We Dream. (Luis Hernandez/Borderzine.com)