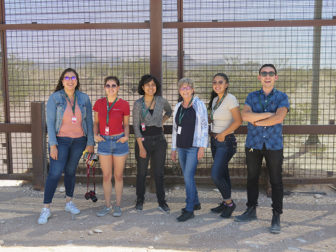 A Borderzine appeal, a so long, but not a final adios as other newsroom causes beckon

Dear friend,
I write today to personally request your continued support for Borderzine by participating in our year-end NewsMatch campaign that doubles your contributions to support student-produced border journalism. I’d also like to share a bit of personal news. Some of our recent journalism graduates already are making a difference, thanks to your support over the years. You may have seen them or read their bylines at news outlets like The Washington Post, ESPN, Texas Monthly, Dallas Morning News, Al Dia, Politico and Univision, among other notable media outlets. Last summer during the horrific mass shooting at an El Paso Walmart, it was gratifying to watch some recent journalism graduates and current students on the ground in the parking lot asking questions and reporting alongside the pros from CNN, Telemundo, The New York Times, and Washington Post.

Borderzine pledge: Enhance our border reporting with a little help from our friends and NewsMatch 2019

It’s been a challenging year for storytelling on the border. A mass shooting at a local Walmart killed 22. Migrant caravans were intercepted at the El Paso-Ciudad Juarez crossings. Thousands of migrant children separated from their parents. A rising crescendo of hate-filled anti-immigrant political speech that goes on and on. 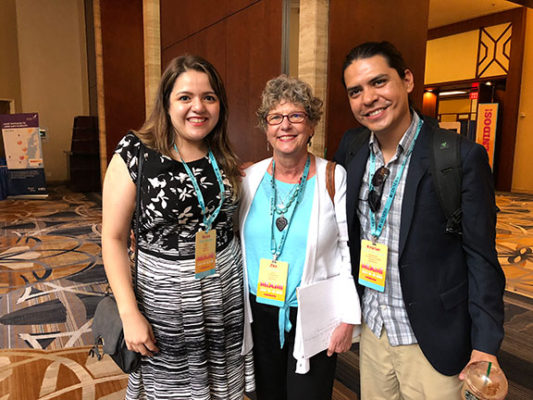 Borderzine turns 10, and the beat goes on

This year is marked by a major NewsMatch fundraising campaign to expand student journalist training, launch of a cross-border community engagement project; and expanded reporting about the borderlands. A 10th anniversary celebration showcase of student photography Nov. 19, 5:30-7 p.m. at UTEP’s Centennial Museum. Please join us. Dear friends, queridos amigos,
As this year of polarizing, fear-mongering political discourse about the border comes to a close, I bring you good news about Borderzine, the online magazine we launched a decade ago to prepare new generations of bicultural news professionals and ramp up coverage of the U.S.-Mexico borderlands. 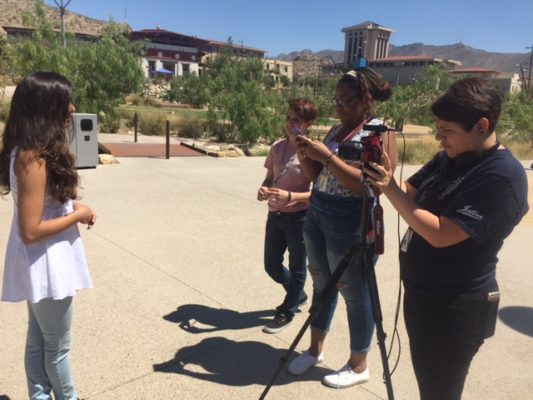 Fruitful year ahead for Borderzine, and a call for support for diversity champion and Hispanic Link Founder-Publisher Charlie Ericksen

The new year starts soon with a bang as a new unpredictable Republican president, downright antagonistic toward news media, the border and immigrants, takes office. And Borderzine’s editors and student journalists are ready for the challenge of reporting the non-headline-making reality of the border region and share it with the wider public, the politicians and decision makers in Washington. Among new ventures in the works for 2017 are a journalism partnership with a major Spanish/English news outlet with increased focus on in-depth reporting by our students and professional staff about the economy, business, education, immigration (yes, the wall!) and the environmental needs of the U.S.-Mexico border region, as well as our signature storytelling – relating the unique culture and contributions of 20 million border residents to the rest of the nation. During 2016, Borderzine student reporters dove into story coverage of Pope Francis’ first-ever visit to Ciudad Juarez and the border, reported thoroughly on the effects of cross-border air contamination in a multimedia package that was presented at a national Communication conference in Philadelphia, and a collaborative effort with the New Mexico In Depth news site and NMSU students to report the local impact of the historic and histrionic presidential race between former Secretary of State Hillary Clinton and billionaire Donald Trump for the White House. Next year we hope to continue two long-standing and successful on-going projects – Journalism in July, a multimedia journalism camp for the El Paso/Ciudad Juarez/Las Cruces area’s best and brightest high school journalists, and an annual summer Dow Jones Multimedia Training Academy for journalism professors from Hispanic-Serving Institutions as well as Historically Black Colleges and Universities. 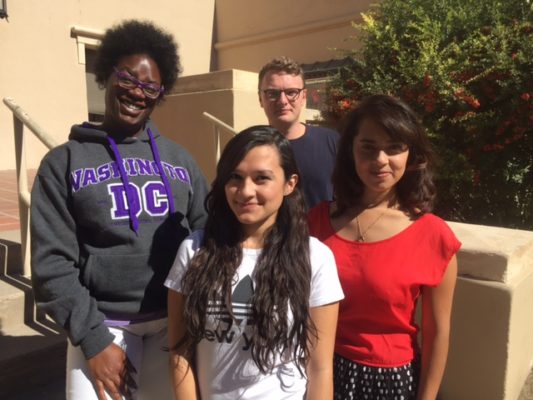 This year’s contentious presidential election will most surely be remembered as one that broke new ground on many fronts: first woman on the ballot, first business tycoon/political outsider to run for the oval office, first time hot button issues of immigration and free trade made it to the national debate stage.  After election day we’ll also know whether the race for the White House has produced a long-awaited milestone regarding the national Latino vote, which many believe to be a sleeping giant that will soon wake up to vote in large enough numbers to affect the outcome of a presidential election.  This remains to be seen.  Read and watch border region election coverage by UTEP and NMSU student reporters and online news site New Mexico In Depth here.  A question in the minds of many is whether Latinos will be motivated to cast ballots in greater numbers than before because of Republican Donald Trump’s anti immigrant rhetoric and hate speech against Mexicans, Latinos and others, and promises to stop illegal immigration by building a “beautiful wall” between the United States and Mexico. Mexico will have to pay for it, he has said. 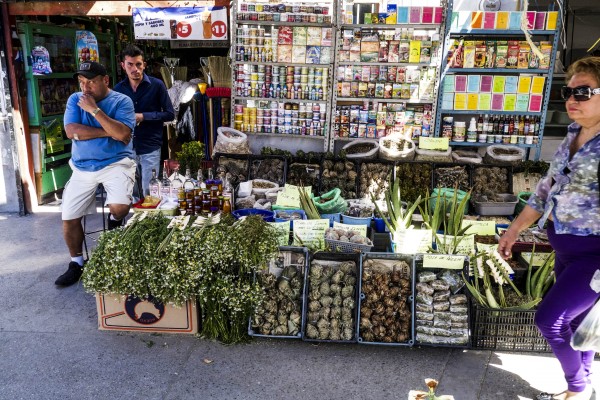 Is Ciudad Juarez’ celebrated return to normalcy after years of brutal drug violence a miracle or a fragile peace?

This question is at the heart of our special report that we publish today in English and Spanish in Borderzine, entitled Special Report Cuidad Juarez: Fragile Peace, by U.S. investigative reporter Ana Arana, who is based in Mexico City, and a team of reporters from Ciudad Juarez.  We are proud that Fragile Peace is a necessary follow-up to Borderzine’s award-winning project, Mexodus, published three years ago. This bilingual multimedia project charted the exodus of Mexican middle class families, businesses and professionals to the U.S. in response to the widespread drug cartel violence and lawlessness raging in Ciudad Juarez and other areas of northern Mexico.  While most local and national news media reported the story in incomplete fashion or not at all, we worked with a team of journalism professors from the U.S. and Mexico to edit and publish the student-produced multimedia project. Fragile Peace expands and provides context to the compelling story of a battered but resilient border city. 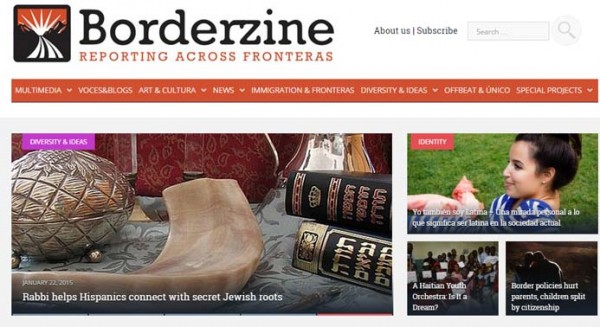 Borderzine redesign reaches out to Border Life readers across all platforms

The 6-year-old online Border Life magazine, Borderzine, crosses another milestone this month with a redesign, enhanced digital features and visuals to better reflect its mission to publish rich relevant content about the borderlands by multicultural student journalists. A few of the exciting changes include a responsive design that allows readers to easily navigate across computer platforms and mobile devices, an updated logo, new story categories covering “Immigration and Fronteras” and “Diversity and Ideas” as well as a snazzier portfolio page to showcase the multimedia journalism of our student reporters. Here are some highlights of what we’ve added:

At the core of the new Borderzine.com is the responsive web design, which makes the site look good across computer platforms and on mobile devices.  We’ve updated our look with a fresh, new logo inspired by the sunrise over a Southwest landscape – the vibrant glow of a new dawn in multicultural America.  New category sections on the home page showcase our unique and varied content. 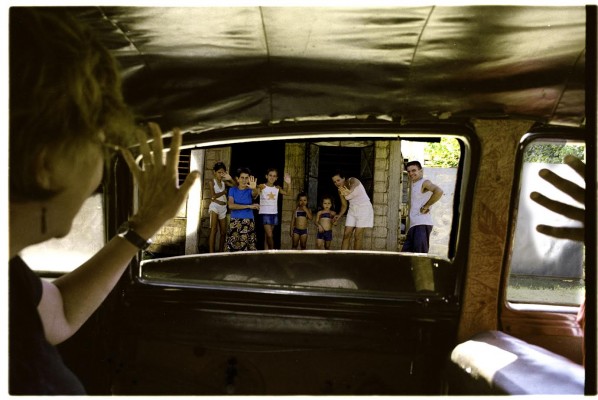 U.S.-Cuba peace pact: Enemies, a Love Story, to be continued …

I blinked in disbelief when the message that the U.S. was restoring full diplomatic relations with Cuba flashed across the top of my iPhone screen. How do more than five decades of Cold War strife between Cuba, my native country, and the U.S., my adopted one, come crashing down with a headline flash on a sunny midweek December morning? At first I was doubtful it was true but after listening to simultaneous announcements by Obama in Washington and Raul Castro in Havana, the impact of what I had heard hit me and I began to sob. They were tears of joy at the good news and long suppressed grief over a homeland lost in time and memory when I was four and my penniless guajiro parents immigrated to Florida in search of una vida mejor, a better life, a tired cliché but true nonetheless. I imagine most Cuban exiles residing in the U.S. and throughout the world –the so called Cuban Diaspora ­– felt similar mixed emotions when they learned that se acabó lo que se daba, the party’s over, after five decades of U.S.-Cuba enmity.

Changing the complexion of news media calls for revolución

It’s time to shatter the myth that young Latino journalists won’t leave home for jobs in news media. This thought and others flashed in neon across my mind as I sipped white wine recently in a San Antonio ballroom to celebrate 30 years of tilling the soil to transform newsrooms into diverse work places by the National Association of Hispanic Journalists. As the speeches and awards played out on stage, I recalled the offensive words of a top news media recruiter not so many years ago.  The recruiter, in his early fifties, had come from Washington, DC to UT El Paso, where I teach journalism, to meet with our journalism students. We thought he was coming to talk about jobs and internships. Instead he lambasted me and my journalism colleagues for producing journalism graduates who “aren’t aggressive enough, do not speak up and refuse to leave home for jobs elsewhere.”

While we were all too stunned to respond, his insensitive comments didn’t surprise me.

His question sounds almost innocent against the turbulent anti-establishment tone of the times. Yet it still resonates for most U.S. journalists with hyphenated identities, myself included. As I watched the PBS documentary, “Ruben Salazar: Man in the Middle,” a few weeks ago at a packed auditorium on the University of Texas El Paso campus, it felt like I was looking into a mirror and witnessing my own ambiguity about my Cuban and U.S. identities. It seems to me that ambiguity about identity frames the existential experience of most immigrants to this country. Where do we belong?