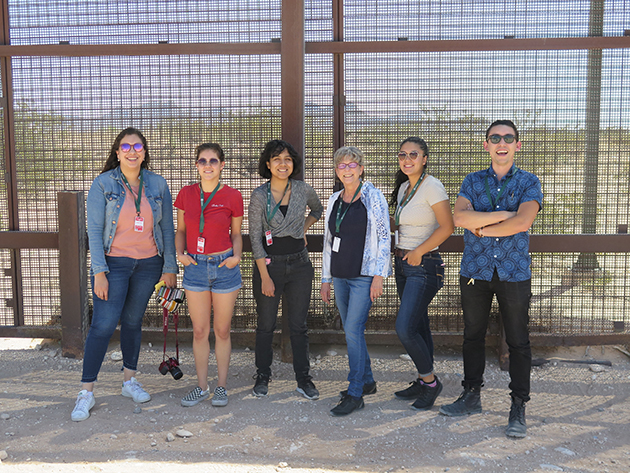 Borderzine student reporters tour border fence near Santa Teresa, NM earlier this year. These and other students developed an ebook, "True Border" 100 Questions and Answers about the U.S.-Mexico frontera" for a digital cross-border reporting project that kicks off in December. Photo by Dino Chiecchi, Borderzine.com

I write today to personally request your continued support for Borderzine by participating in our year-end NewsMatch campaign that doubles your contributions to support student-produced border journalism. I’d also like to share a bit of personal news.

Some of our recent journalism graduates already are making a difference, thanks to your support over the years. You may have seen them or read their bylines at news outlets like The Washington Post, ESPN, Texas Monthly, Dallas Morning News, Al Dia, Politico and Univision, among other notable media outlets.

Last summer during the horrific mass shooting at an El Paso Walmart, it was gratifying to watch some recent journalism graduates and current students on the ground in the parking lot asking questions and reporting alongside the pros from CNN, Telemundo, The New York Times, and Washington Post.

They produced great journalism and made us proud.

And they are the reason we appeal to you today, Giving Tuesday, for a contribution which will expand the solid work we do to train and place student journalists from the border, many of them bilingual, in newsrooms across the country. Last year, for example, NewsMatch support made it possible to place four journalism students in paid summer internships. Next summer we’d like to place five, or more.

For example, a $25-a-month recurring contribution for a year, matched 1:1 by NewsMatch, yields $600 – several weeks of summer salary for a student intern. NewsMatch will also match dollar for dollar your one-time donation up to $1,000 – two-months of an intern’s summer salary.  No matter the amount, Borderzine promises to maximize the impact of your dollar one student at a time.

On to the personal. After nearly two productive and challenging decades at UTEP, I will step down from teaching at the end of this year. It’s time to move on to other endeavors:  I have a book to finish and another to write.  New projects involving Latinos and journalism beckon because I remain committed to the goal of transforming newsrooms so they reflect the true face of America.  And more. Travels to India, Cuba, Tibet, Costa Rica also beckon. I daydream of a leisurely cruise along the rivers of Eastern Europe with David, my husband and life’s partner. No stories to edit or grade. Just flowing with the current.

Begun 10 years ago as a paper dream that came true with financial support from two major media foundations, Ford and Knight, Borderzine has matured and remains in the steady hands of two trusted and experienced journalism professor/colleagues, Executive Editor Dino Chiecchi and Digital Editor Kate Gannon. My advice is available to them at no cost should they require it. Although in truth, I don’t think they will.

Created as a classroom/newsroom and capstone for our multimedia journalism major, Borderzine remains embedded in the journalism curriculum and enjoys the support of our new Communication Department Chair Dr. Richard Pineda. Other ongoing programs are the yearly Journalism in July high school program going on its 18th year and the annual Dow Jones Multimedia Journalism Academy that trains journalism professors from other Hispanic Serving Institutions.  Borderzine is now one of more than 200 nonprofit newsrooms that belong to the Institute for Non-Profit News and is proud to be a second-year participant in the organization’s NewsMatch campaign.

Soon we will wrap up and unveil a grant-funded two-year-old cross border reporting project that includes an ebook, “True Border: 100 Questions and Answers about the U.S.-Mexico Frontera,” a series of podcasts called “Our Border Life,” multiple photo galleries and multimedia stories produced by students from UTEP and UACJ.

An adios isn’t complete without thanking the many smart, talented, dedicated former colleagues and others connected to UTEP who added their unique grain of sand to building a  border journalism program of substance, among them Dr. Stacey Sowards, Dr. Frank Perez, Dr. Tom Ruggiero, Lourdes Cueva Chacon, Dr. Irasema Coronado, Esther Barragan, Angel Cancino, Dr. Cheryl Howard, and the many, many UTEP students became better writers and reporters as a result of what they learned in the Borderzine newsroom and in the UTEP journalism program.

Adelante to you all,