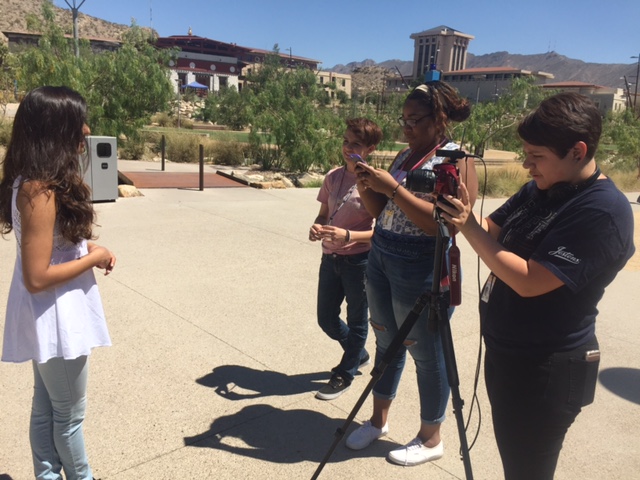 The new year starts soon with a bang as a new unpredictable Republican president, downright antagonistic toward news media, the border and immigrants, takes office. And Borderzine’s editors and student journalists are ready for the challenge of reporting the non-headline-making reality of the border region and share it with the wider public, the politicians and decision makers in Washington.

Among new ventures in the works for 2017 are a journalism partnership with a major Spanish/English news outlet with increased focus on in-depth reporting by our students and professional staff about the economy, business, education, immigration (yes, the wall!) and the environmental needs of the U.S.-Mexico border region, as well as our signature storytelling – relating the unique culture and contributions of 20 million border residents to the rest of the nation. During 2016, Borderzine student reporters dove into story coverage of Pope Francis’ first-ever visit to Ciudad Juarez and the border, reported thoroughly on the effects of cross-border air contamination in a multimedia package that was presented at a national Communication conference in Philadelphia, and a collaborative effort with the New Mexico In Depth news site and NMSU students to report the local impact of the historic and histrionic presidential race between former Secretary of State Hillary Clinton and billionaire Donald Trump for the White House.

Among our new endeavors are plans for a foundation/NAHJ/UTEP partnership for an online news leadership institute for mid-career journalists, and a major national study with NAHJ of the state of Latinos in the news industry. The research and report is led by our new journalism professor Dr. Maria de Los Angeles Flores, a former radio and TV journalist and graduate of the UT School of Journalism.  She is also a fronteriza.

We expect to distribute the surveys to Latino news professionals this year with plans to release and publish the report at the 2018 NAHJ annual conference in Miami. In June I will lead a group of Borderzine students on a Study Abroad tour to Cuba, where I was born, with my UTEP colleague Political Science Professor Dr. Irasema Coronado. We anticipate a unique and mutually productive encounter between our mainly Mexican-American students from la frontera and journalism and political science students from Havana.  We have much to learn from each other.

While planning for the future is exciting, it’s essential to remember and honor those trailblazers who came before us to champion the need for diverse voices and faces in news media.  At the top of the list is Charlie Ericksen, a longtime Latino diversity advocate and founder of Hispanic Link Weekly Report in Washington, DC.  His contributions to training hundreds of young Latinos for careers in journalism and his 20 plus years of insightful reporting of Capitol Hill news and Congressional shenanigans from a Latino perspective were sorely missed during this presidential election season.  His witty, often sarcastic, “Sin Pelos” columns (the name comes from the Spanish expression “no tengo pelos en la lengua” which means I am not holding anything back) would have given both candidates a Latino-infused run for their money.

Charlie was honored this fall in Santa Fe for his lifelong achievements and work on behalf of bilingual journalism by the New Mexico Dual Language Association. He is in his 80’s now and retired in California, and his sons Hector and Carlos Ericksen have started a crowd funding campaign to hire students to digitize and make available online all past copies of Hispanic Link Weekly Report. This invaluable archive of thousands of news stories and essays is a rich and living history of the role of Latinos in U.S. politics and in U.S. news media.  It deserves to be made available to journalists, researchers and the public.  As a former reporter in The Washington Post newsroom and grateful mentee of Charlie’s, I have contributed personally to the effort and hope you will too at: http://www.hispaniclinkarchives.org/donations.html. See this related Borderzine story.

Finally, as I do at the end of every year, I am extending a call for support for our Borderzine teaching newsroom. In spite of the outstanding journalism by our students and editing faculty – professors Kate Gannon, Dino Chiecchi and Maria de Los Angeles Flores – our hearts sank this fall when our external hard drive, with ALL the original files dating to the bilingual web magazine’s inception in 2008, crashed by accident. They are retrievable but at a cost of almost $2000.

That’s not much for some people like Trump’s millionaire, soon-to-be Cabinet members, but quite a lot for a university-anchored project that depends on grants and donations to keep up with new technology, digital tools and changes in the news media industry. I hope your heart moves you to contribute, even if it’s just the five dollars you had planned to spend on a café con leche at Starbucks or Lucy’s.  Next time you are in El Paso, I promise you a cup of homemade café cubano and a tour of our newsroom/classroom