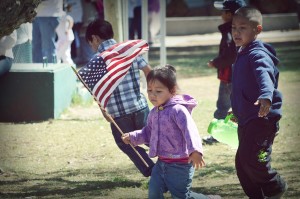 Editor’s note: This story was previously published on the Chicago Reporter. In 2010, the head of the U.S. Immigration and Customs Enforcement agency told his staff to focus on deporting the most dangerous and violent undocumented immigrants. But an investigation by The Chicago Reporter found little change in the percentage of these deportations since then—nationally and in the agency’s Midwest region, which includes Chicago. John Morton, who stepped down as director of the agency this past summer, issued the directive in a June 30, 2010 memo. Yet between 2010 and 2012, the number of people removed from the country who committed a serious felony or violent crime—what officials call the “priority 1” category—actually decreased slightly from 9.5 to 8.7 percent, according to the Immigration and Customs Enforcement data analyzed by the Reporter. 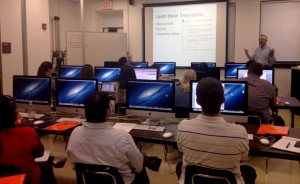 EL PASO – Professional and independent journalists from across the country joined the Robert McCormick Foundation and Borderzine for “Immigration from the Border to the Heartland,” a specialized reporting institute that taught journalists about technology, data, immigration research and law enforcement. During the SRI, professional journalists shared the tools they use while reporting their beat, academics presented their research and advocacy groups talked about how they work with the community. From the three-day workshop, Borderzine gathered the following resources that can assist journalists who wished to cover immigration in their communities. 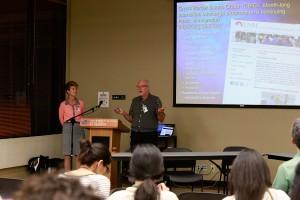 EL PASO – Researchers from the Cross-Border Issues Group at the University of New Mexico unveiled the faces of traveling migrants in an hour-long, eye-opening presentation at UTEP recently for journalists on the realities of immigration. “Central Americans have no sense of the distance they will have to walk to the border,” said Carolyn Gonzalez of UNM who co lead the presentation with Richard J. Schaefer, co-founder of CBIG and a professor at UNM. “The Ebb and Flow of Immigration: Getting Away from the Buzz,” as the presentation was titled, covered hot topics of immigration, including personal stories gathered by members of the CBIG during their visits to migrant shelters in Mexico and Central America. They also presented photos of the conditions migrants face when traveling through Central America and Mexico to the U.S., and valuable data regarding border security and the economic impact of immigration on the nation. Their presentation was part of a national immigration-reporting workshop at UTEP September 26-29 called “Immigration from the Border to the Heartland.”  Twenty U.S. journalists from online, print, TV and radio outlets in both English and Spanish participated in the workshop that was sponsored by the McCormick Foundation and hosted by the online magazine Borderzine.com. 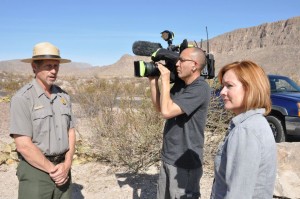 EL PASO – Radio journalist Mónica Ortiz Uribe related how she was deeply moved when she witnessed the detention of a an undocumented woman from Guatemala who had crossed the border into Brooks County in South Texas with her two small children. “I had never seen an apprehension… that really struck me immensely,” said Ortiz Uribe. “She looked at me and I was standing with my microphone and my headphones, and she’s pleading saying ‘please tell them not to send me back’ and all of a sudden all this imagery exploded in my head… what has this women had gone through?”

With a chuckle, she added that she would never make it as a border patrol agent because “I’d probably have said to the woman, ‘No, no, váyase señora, váyase. It’s O.K. I didn’t see you.’”

Ortiz Uribe, who reports for the public radio news outlet Fronteras Desk, was one of four local journalists who cover immigration on an ongoing basis and discussed their experiences during a training workshop Immigration from the Border to the Heartland last week at UTEP for 20 radio, broadcast, online and print journalists. The workshop was sponsored by the McCormick Foundation and hosted by Borderzine.com. 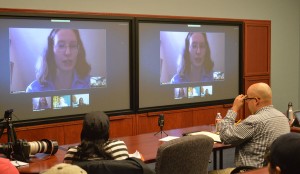 EL PASO – Advocates, journalists and policy experts joined for a virtual debate to discuss the immigration reform bill on Sept. 28as part of a Specialized Reporting Institute on immigration held at the University of Texas at El Paso. Richard Pineda, associate professor for the UTEP Department of Communication, moderated the panel of immigration experts that included Michelle Mittelstadt, from the Migration Policy Institute, Susana Flores, communications specialist for Casa de Maryland, Amanda Bergson-Shilcock, from Welcome House Pennsylvania, and Patricia Guadalupe, Capitol Hill correspondent for Hispanic Link. The panelists discussed issues related to the proposed immigration reform bill which was passed this summer by the Senate and is pending in the house. The Senate bill is expected to give a path from temporary status to citizenship for some 11 million undocumented immigrants living in the U.S., and will prevent a continued record number of deportations.

EL PASO – Borderzine.com has selected a diverse group of 17 online, print, broadcast and Spanish-media journalists to attend the McCormick Specialized Reporting Institute on Immigration on the UTEP campus September 26-29. Chosen from a diverse pool of 76 applicants from throughout the United States, those selected include freelance journalists and represent a good mix of geographic and ethnic diversity. Three UTEP student journalists will also receive scholarships to attend the workshop. During the three-day training the journalists will learn how to mine data and access other research to develop compelling and in-depth stories about immigration in their local communities. They will also learn about immigration policy and legislation from national experts, tour the border fence, learn how border journalists cover the issue and participate in a town hall meeting with local immigrant community leaders at Centro de Salud Familiar La Fe in the predominately immigrant Segundo Barrio community of El Paso.