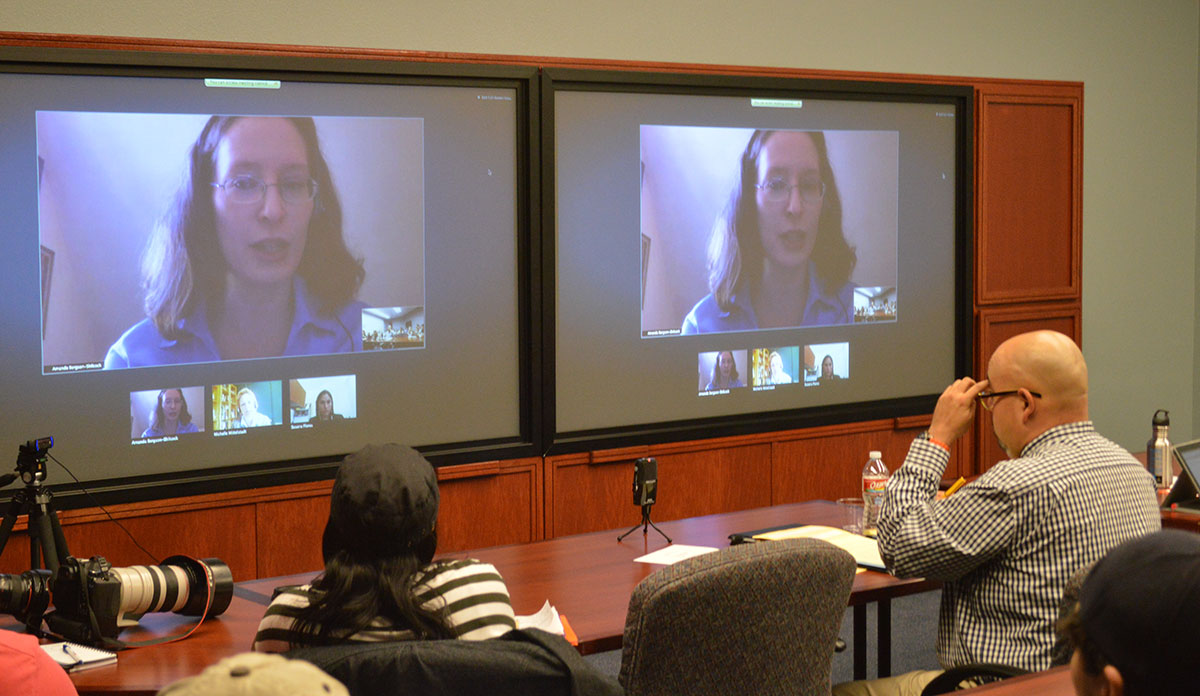 Amanda Bergson-Shilcock, director of outreach of the Welcome House Pennsylvania interacts with Dr. Richard Pineda from the Communication Department at UTEP and moderator of the panel. (Luis Hernández/Borderzine.com) Amanda Bergson-Shilcock, director of outreach of the Welcome House Pennsylvania, interacts with Dr. Richard Pineda (right) from the Communication Department at UTEP and moderator of the panel. (Luis Hernández/Borderzine.com)

EL PASO – Advocates, journalists and policy experts joined for a virtual debate to discuss the immigration reform bill on Sept. 28as part of a Specialized Reporting Institute on immigration held at the University of Texas at El Paso.

Richard Pineda, associate professor for the UTEP Department of Communication, moderated the panel of immigration experts that included Michelle Mittelstadt, from the Migration Policy Institute, Susana Flores, communications specialist for Casa de Maryland, Amanda Bergson-Shilcock, from Welcome House Pennsylvania, and Patricia Guadalupe, Capitol Hill correspondent for Hispanic Link. The panelists discussed issues related to the proposed immigration reform bill which was passed this summer by the Senate and is pending in the house.

The Senate bill is expected to give a path from temporary status to citizenship for some 11 million undocumented immigrants living in the U.S., and will prevent a continued record number of deportations.

First, Pineda addressed the panelists about their views on the impact that advocacy groups can have on Congress. The four agreed that the future of immigration reform rests with the House also passing a version of the bill. For Mittelstadt, that won’t be until 2014.

“More than half of the House hasn’t voted for this bill. Which leaves the question: ‘Where do they go from here?’” said Mittelstadt. While the general public waits for a resolution to immigration reform, Flores believes that the current Senate bill will hurt women because female undocumented immigrants, who rarely hold steady jobs, will have a harder time proving employment and residence in the U.S. She said that more than a hundred undocumented mothers in the Washington, DC area have engaged in acts of civil disobedience and been arrested to call attention to the need for the reform. More rallies and protests are planned for October, she said.

Flores added that the complexity of the bill has led communities along the border and in the other parts of the country to support or oppose different aspects of the bill. Bergson-Wilcox advised the visiting journalists at the conference to identify and write about the pros and cons of the bill.

“People need to see the complexity of the bill, which will help them to understand how this bill is actually working,” Bergson-Wilcox said.

Guadalupe said the U.S. population has many misconceptions about Mexico, including that it is a violent and poor country that pushes immigrants north. She added that according to international organizations that monitor levels of violence, North Korea is more dangerous than Mexico.

Finally, the panelists reiterated that there are many immigrants waiting in line for family visas in addition to the 11 million undocumented immigrants living in the country who are pinning their hopes on an immigration reform bill with a path to citizenship.

“There are some 4.4 million waiting in line,” Mittelstadt said. “Most are people who are living in the U.S. and waiting for a green card.”