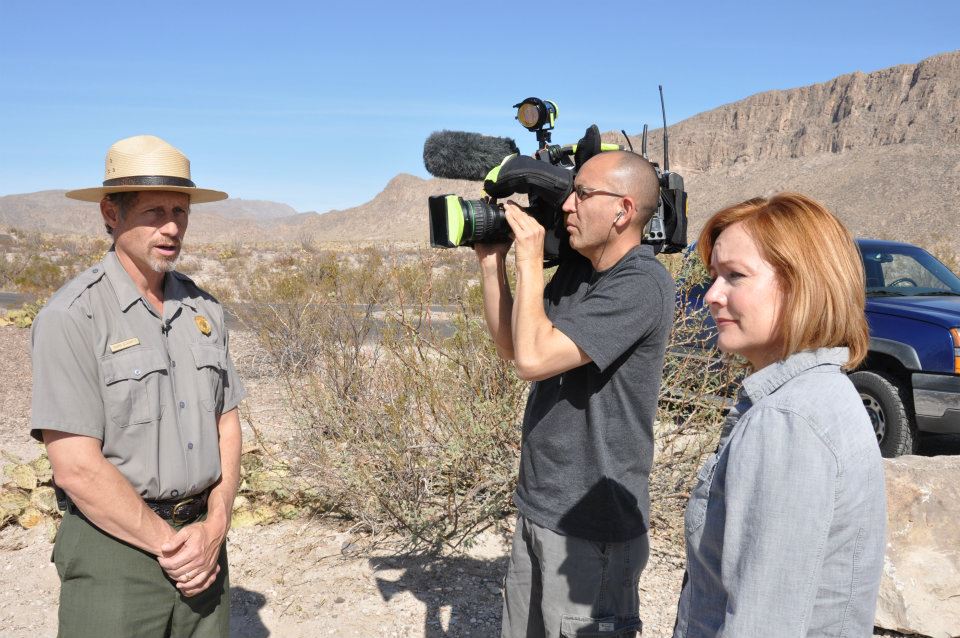 Border reporters, Angela Kocherga and Hugo Perez, reporting from Boquillas, México. Kocherga was part of a panel of border journalists that shared their experiences covering immigration. (Courtesy of Angela Kocherga) Border reporters, Angela Kocherga and Hugo Perez, reporting from Boquillas, México. Kocherga was part of a panel of border journalists that shared their experiences covering immigration. (Courtesy of Angela Kocherga)

EL PASO – Radio journalist Mónica Ortiz Uribe related how she was deeply moved when she witnessed the detention of a an undocumented woman from Guatemala who had crossed the border into Brooks County in South Texas with her two small children.

“I had never seen an apprehension… that really struck me immensely,” said Ortiz Uribe. “She looked at me and I was standing with my microphone and my headphones, and she’s pleading saying ‘please tell them not to send me back’ and all of a sudden all this imagery exploded in my head… what has this women had gone through?”

With a chuckle, she added that she would never make it as a border patrol agent because “I’d probably have said to the woman, ‘No, no, váyase señora, váyase. It’s O.K. I didn’t see you.’”

Ortiz Uribe, who reports for the public radio news outlet Fronteras Desk, was one of four local journalists who cover immigration on an ongoing basis and discussed their experiences during a training workshop Immigration from the Border to the Heartland last week at UTEP for 20 radio, broadcast, online and print journalists. The workshop was sponsored by the McCormick Foundation and hosted by Borderzine.com.

Moderated by UTEP Anthropology Professor Dr. Gina Nuñez, the other journalists on the panel were Angela Kocherga, of the Belo television border bureau, Kent Paterson, with the Frontera Norte-Sur website at New Mexico State University, and Nicole Chávez, city editor for Borderzine.com.  They discussed the challenges they face covering difficult stories involving the human side of undocumented immigrants and immigrants who die crossing the border. They also discussed recent changes in border patrol policies that require agents to carry webcams, and the move by some states to grant driver’s licenses to the undocumented.

Chávez, a senior multimedia major at UTEP, talked about her recent experience as an intern at The Washington Post and the attitude a journalist must adopt when covering immigrant stories. “You have to put yourself in their (immigrants) position somehow,” she advised.

Kocherga said immigration reporting goes beyond just writing about the movement of people across borders, especially with the recent influx of Mexican professionals and families fleeing the violence in their country. “Immigration and violence have intersected (in news stories) in various difficult ways,” she said. “I had to learn about the whole area of asylum.”

Paterson has been reporting on the chile pickers in Southern New Mexico for 30 years and provided background about the industry which started 100 years ago and led to the creation of unions for the workers. He said he has witnessed how “the labor conditions have deteriorated in numerous ways,” in the form of lower wages, harsh working conditions and shorter life spans for workers. “Pesticides have been an issue… some of them are dying of cancer and liver problems,” he said.

The journalists also touched on efforts in Congress to pass immigration reform legislation, which has been adopted by the Senate but has not been brought to the floor of the House.

Although reform efforts have been stuck at the national level, Paterson said that at the state level “there are some interesting reforms,” referring to California’s new initiative to grant driver licenses to the undocumented and a recent failed proposal in Texas.

The conversation then moved to whether multimedia can help journalists tell the story of immigration more effectively. Ortiz Uribe said multimedia storytelling is both “a curse and a blessing,” and explained that it is always a challenge to juggle audio, photos and video like an “octopus.” At the same time, she said, social media allows a journalist to share his or her experience with the audience and “takes listeners along the journey,” creating a “deeper interaction.”

For Chávez, data visualization is another important skill that helps audiences digest hard data and present it in a more user-friendly way.

Paterson added that whatever the medium a journalist uses, “everything that you are doing is a testament to history.” Nuñez made a plea to other professionals and scholars to share their investigations and findings with journalists so they can present that data to the public and “humanize, educate and change the discourse.”

The panel concluded with intense debate about the proper vocabulary to address immigrants.

Recently, the Los Angeles Times and the Associated Press announced they would no longer use the term “illegal immigrant” and instead use “undocumented.” Kocherga warned that no matter what term a journalist uses, whenever he or she talks about “immigration and guns,” be prepared for a lot of backlash from readers.

Paterson said he has received death threats in the past because of his stories on the undocumented and warned the journalists to be prepared to receive them.

He avoids using the term “illegal” or “undocumented” immigrant unless it has “some kind of bearing on the story.”

But Ortiz Uribe argued that the term “illegal immigrant” is accurate legally and she prefers to use it in her stories. “To get rid of that term and smooth it out eliminates the opportunity for that debate,” she said.