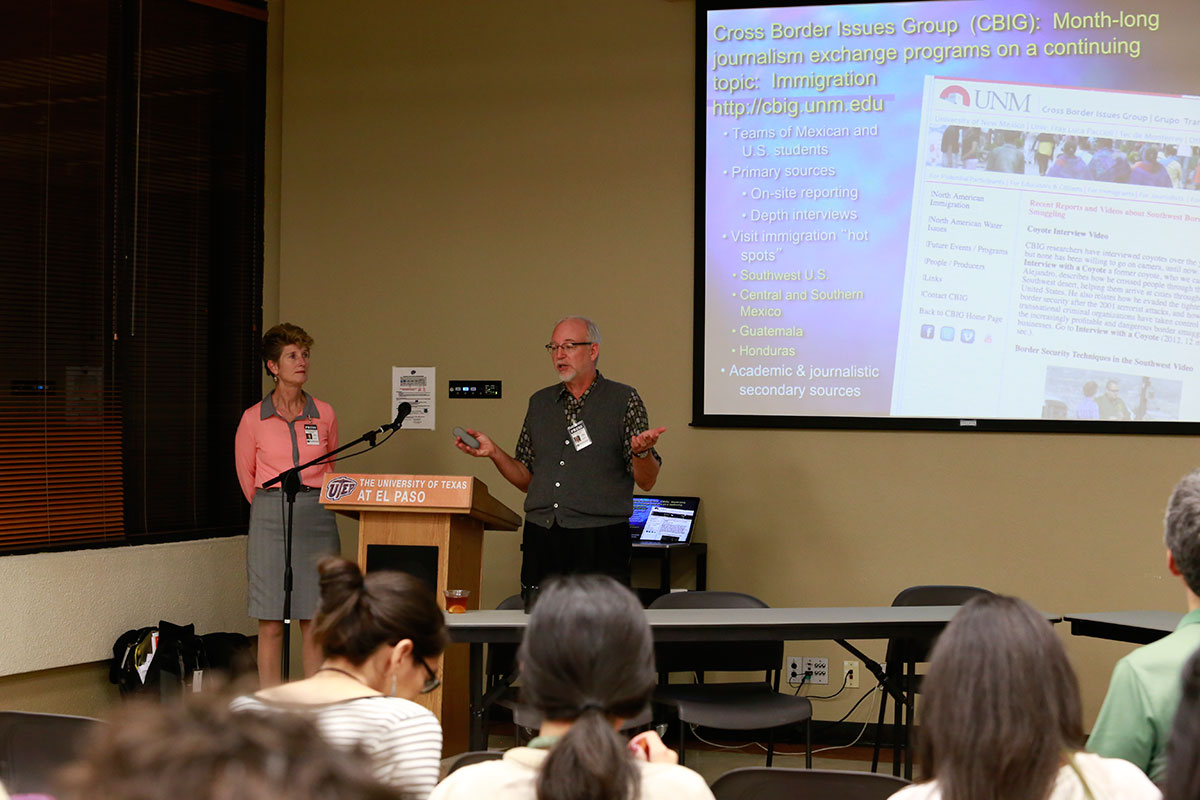 Dr. Carolyn Gonzalez and Dr. Richard Shaeffer from the Cross-Border Issues Group at the University of New Mexico presented their research work to the participants of the McCormick Special Reporting Institute on Immigration. (Aaron Montes/Borderzine.com) Dr. Carolyn Gonzalez and Dr. Richard Shaeffer from the Cross-Border Issues Group at the University of New Mexico presented their research work to the participants of the McCormick Special Reporting Institute on Immigration. (Aaron Montes/Borderzine.com)

EL PASO – Researchers from the Cross-Border Issues Group at the University of New Mexico unveiled the faces of traveling migrants in an hour-long, eye-opening presentation at UTEP recently for journalists on the realities of immigration.

“Central Americans have no sense of the distance they will have to walk to the border,” said Carolyn Gonzalez of UNM who co lead the presentation with Richard J. Schaefer, co-founder of CBIG and a professor at UNM.

“The Ebb and Flow of Immigration: Getting Away from the Buzz,” as the presentation was titled, covered hot topics of immigration, including personal stories gathered by members of the CBIG during their visits to migrant shelters in Mexico and Central America. They also presented photos of the conditions migrants face when traveling through Central America and Mexico to the U.S., and valuable data regarding border security and the economic impact of immigration on the nation.

Their presentation was part of a national immigration-reporting workshop at UTEP September 26-29 called “Immigration from the Border to the Heartland.”  Twenty U.S. journalists from online, print, TV and radio outlets in both English and Spanish participated in the workshop that was sponsored by the McCormick Foundation and hosted by the online magazine Borderzine.com.

Shaeffer and Gonzalez have worked with U.S. and Mexican students over the past several years to collect stories, information and pictures on the migration of undocumented men, women and children from Mexico and Central America to the border. Their research includes interviews with hundreds of victims of human trafficking, unaccompanied minors and migrants who have lost limbs and sustained other injuries during their trek north on top of trains, referred to as “La bestia.” The number of migrants from Central America has been growing steadily in the last few years, according to Shaeffer. (Aaron Montes/Borderzine.com)

“Pictures are so much part of this,” Schaefer said before starting his presentation, which included photos of migrants with missing or cauterized limbs. One photo showed a young man had lost a foot after being struck by a live electrical wire while clinging to the top of a train.

During the past several years, Shaeffer and Gonzalez have visited nearly a dozen private albergues, or refuges, that provide food, safety, medical attention and shelter to the traveling migrants.

Run mostly by churches and volunteers, the albergues are often located near freight yards and rail hubs, and host migrants for two to three days, according to the UNM researchers.

A rise in drug-related violence in Central America has been one of the catalysts forcing children to travel north alone, and often become victims of violence and human trafficking.

According to the U.S. Department of Health and Human Services, 5,252 unaccompanied immigrant minors arrived in the U.S. between the period of October 2010-March of 2011, including 1,390 apprehended in the month of March only. This is a 93% increase from the correspondent period the previous year.

Santiago López Gomez is a Human Rights Committee leader in Ocosingo, Chiapas, Mexico and became one of Shaeffer’s sources.  Although López Gomez only attended school through third grade,  “I thought I was talking to some hot-shot lawyer,” said   Schaefer.

López Gomez made Gonzalez and Schaefer aware of the trafficking of Guatemalan girls aged 12 to 16 who are being taken from their villages and brought to the U.S. to serve as prostitutes for farm workers. According to Shaeffer, he learned that the practice has created a large HIV problem in Central America and Mexico.

Shaeffer said he also learned that many unaccompanied minors caught in the U.S. are being sent to orphanages or returned to their home villages.

Although the majority of undocumented immigrants to the U.S. in the last decade are from Mexico, the number of migrants from Central America has been growing steadily in the last few years, according to Shaeffer.