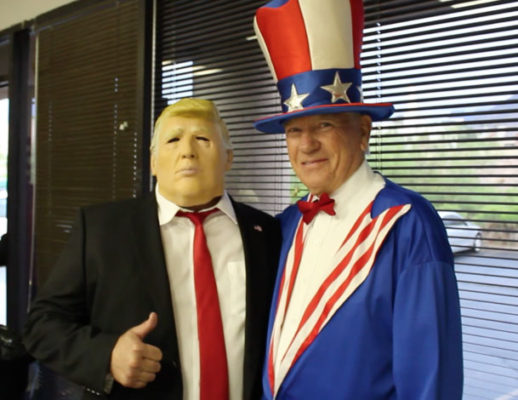 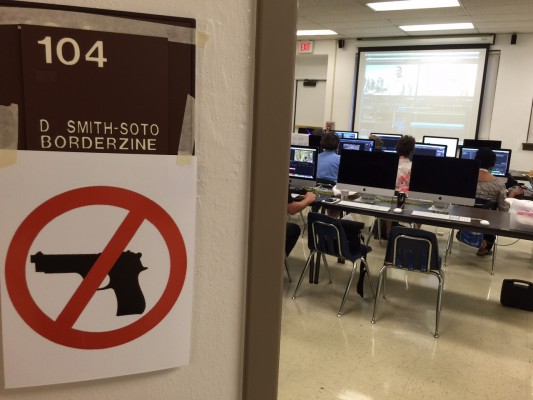 In wake of UCLA campus shooting, a reminder that Texas opens college classrooms to guns August 1

The recent shooting murder of a professor and the shooter’s suicide in the engineering building on the UCLA campus is a tragic reminder that on August 1 Texas public universities open their classrooms to guns. I recognized the office where the murder took place. The cramped associate professor’s office where quiet meetings with students take place is like the ones I used at the University of Texas at El Paso for a dozen years before my retirement in January. These small cubbyhole offices are the classic workspaces for associate professors outside of the lecture hall. In the bustling academic crystal palace they are small sanctuaries where students seek guidance as they wind their way through the labyrinth of higher education. 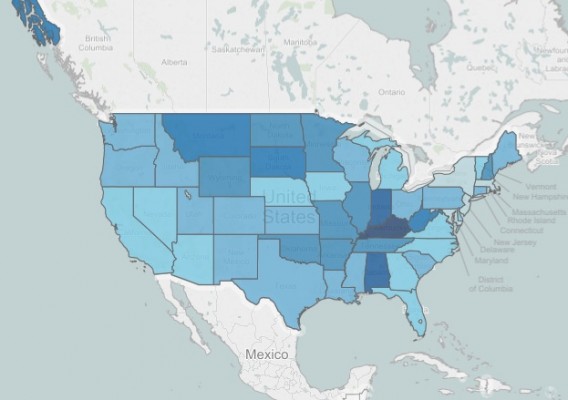 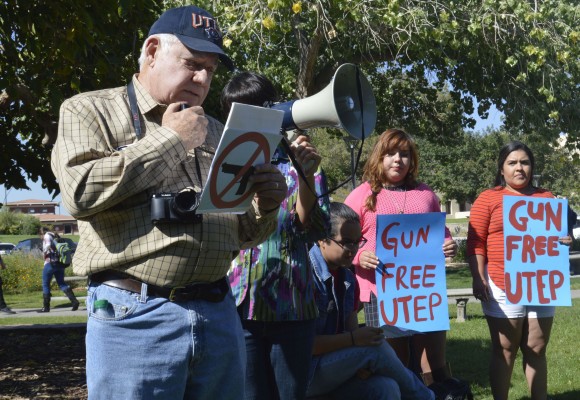 Campus-carry opponents have their say at UTEP rally

EL PASO — With the cameras rolling from every news station in the city, journalism Professor David Smith-Soto and State Sen. Jose Rodriguez used a megaphone to make their case against allowing the concealed carry of guns on the UT El Paso campus. “From one thing the presence of a gun in a classroom destroys the classroom, the environment of the classroom, being able to have discussions, that type of thing, but the most important thing is we don’t know who is carrying this gun and through our campus, all the gun massacres that have occurred on campuses have been done with legal weapons,” Smith-Soto said. He and Rodriguez addressed a small crowd of protesters who gathered at Leech Grove at UTEP Oct. 19 to show their opposition to the newly approved Texas law that will allow concealed guns on campus starting in the fall of 2016,

“I think it’s great that the students at UTEP are coming together and are expressing themselves – that guns on campus promote more violence; expose more people to harm,” Rodriguez said. Many faculty and staff members said they came out sign a petition and show support the movement for repealing the law.

No guns in my classroom No. 4: More killings with a legal gun now in Roanoke, more reason to stop ‘campus carry’

This week the mass gun shooting — two dead, one wounded — was in Roanoke, Virginia — another gun killer, again shooting with a legal gun. Another hater who bought a gun legally and killed two unsuspecting young journalists in the street. Another legally owned gun carried by its purchaser to a public place and used to shoot to death reporter Alison Parker,24, and photographer Adam Ward, 27, on a pretty morning as people just like us went about their business. That is why I don’t want any guns, legal or not, in my classroom.  Anybody in America can get a gun and we are all targets. That’s why the “campus carry” gun law passed by the Texas State Legislature this year, which allows guns to be carried on public university campuses is  a travesty and a violation of our civil rights, a danger to my students as they attend class and to me as I lecture.

There have been three mass murders in the U. S. using legally obtained guns, virtually one massacre per week since I first protested the new Texas ‘campus carry’ gun law by declaring in June that I don’t want guns in my classroom. The unraveling TV coverage following each tragic event becomes horribly commonplace as if demanding a certain formula that at first builds a virtual three-dimensional sculpture of the killer, unwittingly glorifying him and his motive, followed by necessarily sketchy details about the victims, unwittingly relegating them to the grave, and then followed by an oddly similar string of police officials, politicians, and bureaucrats congratulating each other on the containment of the event and usually the death of the perpetrator. After all that, their statements of condolence for the victims and their loved ones ring strangely hollow. It always seems that no amount of subsequent grieving can ever be enough to make up for the injustice and pain caused b the murders, especially as the mass gun shootings blend into each other as naturally as one week following another. Related Columns: No Guns in My Classroom
No guns in my classroom — part II Gov. Abbott celebrates ‘campus carry’ with target shooting in Pflugerville
In the midst of the tragedies, there is always a parenthetical discussion in the media deploring the prevalence of guns in our society  — 300 million more or less in the hands of individuals — and the usual red herring morphed into a red whale that the prevalence of mental defectives in the nation and the lack of mental health care is to blame for the violence because guns are only inanimate objects subject to the will of the individual.

No guns in my classroom

EL PASO –I don’t want guns in my classroom. Before Republican Texas Gov. Greg Abbott signs into law legislation passed Sunday by the state legislature, which allows individuals to carry concealed handguns into  public university campuses, he should take a moment to actually think. I am saddened by the endless arguments from gun rights advocates and the counter-arguments from their opponents, insistent arguments that imply that logic can prevail in absurdity. The logic is always twisted. Some say more guns on the street will stop the killing. 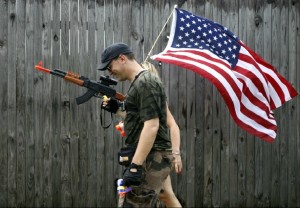 I was watching a weightlifting competition in a Juarez gym not too far from my old home near Plaza Juarez Mall in 2009. As I sat near the stairs toward the back of the gym, a young man was struggling to lift an absurd amount of weight when two men who did not seem interested in the competition came in through the back entrance . I remember hearing a loud metal clanging noise like the sound of weights dropping, followed by gun shots. Everything after that is a blur — running up the stairs, finding a place to hide, people screaming. Only one particular detail remains clear, the jet black 9mm handgun in the killer’s fist.