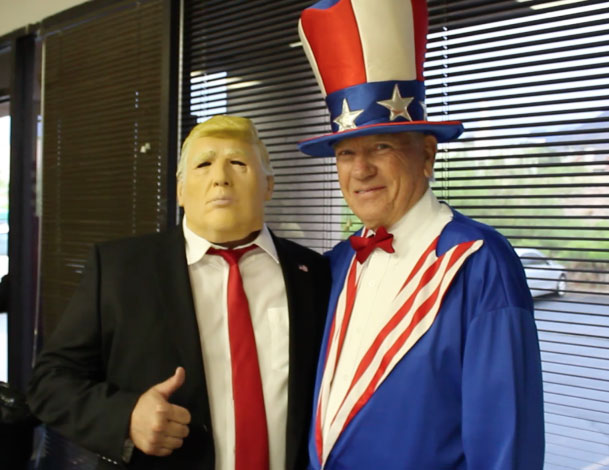 EL PASO, Texas – CNN reported that more than 80 million people tuned in to watch the Clinton-Trump debate on September 26, making it the most-watched presidential debate in history.

It will also remain a day which will live long in my memory as my first real taste of a U.S. presidential debate watch. When I first arrived at the El Paso County Republican Party offices I was greeted with a man carrying a 12 gauge shotgun and a .44. Magnum marching Hilary Clinton around the offices. No, not the real Hillary, a masked version of the candidate.

I knew Clinton would be unpopular with these hardcore Republicans but I did not expect this.

There was another Hillary, wearing a hospital gown and using a zimmer frame (a walker). The two Clintons, Uncle Sam and a makeshift Trump were all a big hit with the crowd with nearly everyone taking their chance to get a selfie with each of them.

They proceeded to walk Prison Hilary through the crowd while some members of the audience chanted “shame!” Yes, it was just like this scene from Game of Thrones.

After a lot of laughter, cheering and jibes from party members the crowd settled down to watch the debate, “Donald dogs” and “Pence corn” in hand. I couldn’t believe there was this kind of support for Trump in El Paso, given that there is an 80 percent Hispanic population here in this city on the U.S., Mexico border. The crowd was very animated during the debate, here are some of the issues which gained a notable reaction from the crowd:

Trump claims Clinton does not have the stamina to be president – met with cheers.

Trump says NATO needs to “knock the hell out of ISIS” – met with applause.

Hillary’s proposal of a “special prosecutor” – met with laughter.

Trump to Clinton “when you try and act holier than thou, it really doesn’t work.”- met with cheers and laughter.

Trump says he will release his tax info when Clinton releases her emails – met with a very loud cheer.

Hillary’s comments on gun control – met with groans and jibes.

Being from England, this was all a bit surreal and it made UK election campaigns look very, very boring. I couldn’t resist the photo op.

You can take a look at my live-tweeting of the event here.

Keep an eye on my Twitter feed for more election coverage.