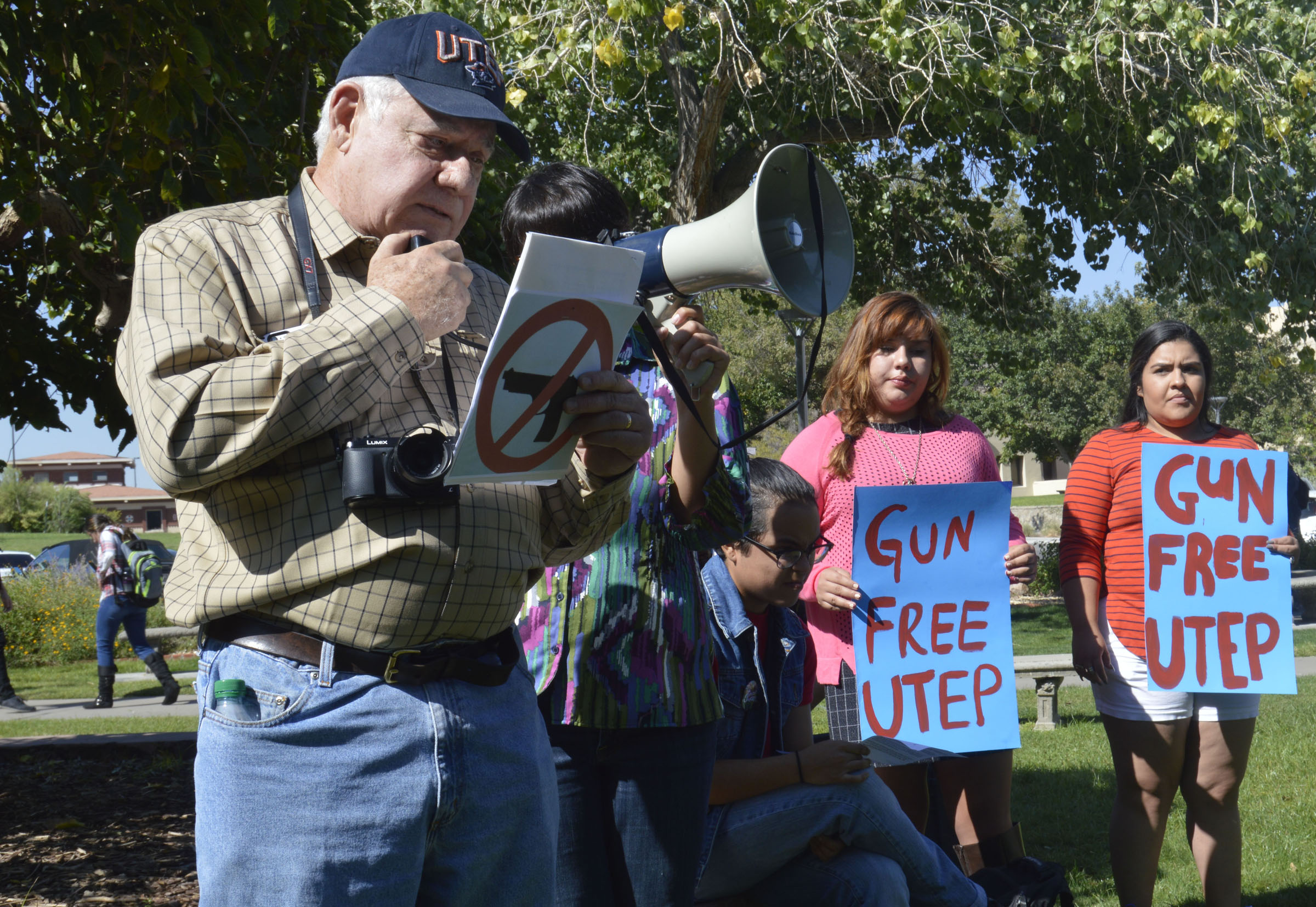 EL PASO — With the cameras rolling from every news station in the city, journalism Professor David Smith-Soto and State Sen. Jose Rodriguez used a megaphone to make their case against allowing the concealed carry of guns on the UT El Paso campus.

“From one thing the presence of a gun in a classroom destroys the classroom, the environment of the classroom, being able to have discussions, that type of thing, but the most important thing is we don’t know who is carrying this gun and through our campus, all the gun massacres that have occurred on campuses have been done with legal weapons,” Smith-Soto said.

He and Rodriguez addressed a small crowd of protesters who gathered at Leech Grove at UTEP Oct. 19 to show their opposition to the newly approved Texas law that will allow concealed guns on campus starting in the fall of 2016, “I think it’s great that the students at UTEP are coming together and are expressing themselves – that guns on campus promote more violence; expose more people to harm,” Rodriguez said.

Many faculty and staff members said they came out sign a petition and show support the movement for repealing the law.

“I’m here because I’m really concerned what this new policy is going to do to the climate of the classroom.” said psychology graduate student and lecturer Corin Ramos, “I just want to come to school to teach and learn I don’t want to teach in fear.” The rally was organized through a Facebook group started by Sarah Walker, a senior majoring in English literature. Within two weeks it grew to more than 200 members. The group is encouraging people opposed to campus carry to sign a petition asking the Texas Legislature to repeal the law. By early November, the petition on Change.org had been signed by almost 8,000 people.

“I’m very happy with the way today turned out, I’m extremely grateful for my co-organizers and the people that rallied to put this together, the media that showed up. Senator Rodriguez, professor David Smith-Soto – the fact that people in those authoritative positions are willing to come out and speak,and speak so publicly is a huge, huge relief,” Walker said.

UTEP has implemented a campus carry task force to help designate areas where guns would be prohibited. They will be conducting town-hall style meetings on campus three times this year and are accepting feedback on the following website: http://sa.utep.edu/campuscarry/