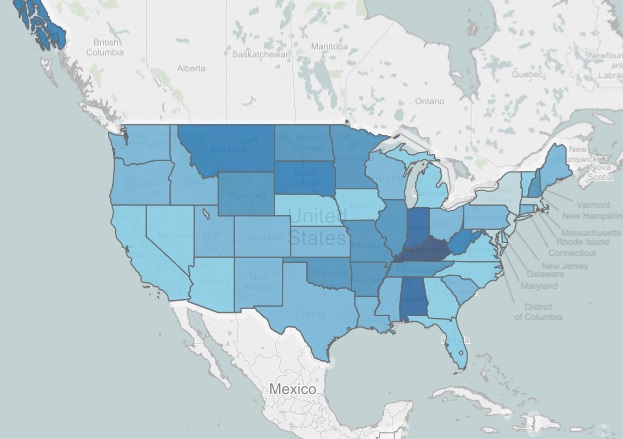 States that were among the least favorable to gun owners usually recorded fewer federal checks for firearm purchases and gun permits.

The Scripps Howard Foundation Wire compared 2015 FBI records of the number of background checks with the list of the best states for gun owners in 2015 compiled by Guns and Ammo magazine and found there was a pattern.

Guns and Ammo is published by the Outdoor Sportsman Group Network.

The magazine ranked each state on five categories, including the right to carry a gun and the right to purchase certain types of rifles. State laws may differ from federal laws regarding access to firearms.

The FBI does background checks for 30 states, five territories and the District of Columbia. The other 20 states do their own or do them in cooperation with the FBI. The FBI compiles its own data with that from the states that do their own checks.

The FBI consistently runs more background checks each year for Kentucky than any other state by a wide margin. In 2015, that number was 3,218,371 – nearly equal to the amount of checks performed by the FBI in California and Texas combined.

Stephen Fischer, spokesman for the FBI, said the bureau could not comment on state agencies processing of background checks because it is not familiar with state laws. Fischer referred us to the Kentucky State Police Department and the Bureau of Alcohol, Tobacco, Firearms and Explosives.

“We have a policy in place where we conduct follow-up background checks,” Michael Webb, spokesman for the Kentucky State Police, said. “It’s just reassessing the status of the current concealed-carry deadly weapon permit holders to see if they meet the eligibility requirements.”

It’s to make sure that the permit holder is still up to snuff, Lars Dalseide, spokesman for the National Rifle Association, said. If an individual has committed a crime after passing a background check, the offense will be picked up in the next check cycle.

The Kentucky State Police would not comment on the investigation process for when the system picks up a license holder who no longer meets the requirements. The Technical Services Division of the state police deals with investigations.

The number of background checks that Kentucky performs is 4.5 times higher than the next highest state, Indiana, which ranked 16th on Guns and Ammo’s most favorable list. Indiana performed 16,268 background checks per 100,000 people.

Outside of the Kentucky State Police, the topic of background checks was a mystery for many officials.

Leslie Gannon, deputy commissioner for Kentucky’s Department of Criminal Justice Training, said the department could not help with questions about background checks. Gannon served as a member of the Kentucky Law Enforcement Council for five years.

An intelligence analyst with the records branch of the Bureau of Alcohol, Tobacco, Firearms and Explosives, who declined to give her name, would not comment. We reached her after our call was transferred to three different offices at the bureau. Repeat calls produced the same results.

But others involved with gun purchases had explanations.

“I think a lot of it is just due to business booming,” Amanda Davenport, who works in e-commerce for the Kentucky Gun Co., said. “I think a lot of people out here are trying to stock up and buy a lot of guns right now, personally.”

States that were ranked as the worst places for gun owners were usually associated with a lower number of federal background checks.

Nearly 11 million firearms were manufactured in the U.S. in 2013, the largest number in a single year. The Bureau of Alcohol, Tobacco, Firearms and Explosives started recording data in 1986.

The FBI performed about 23 million firearm background checks in 2015.