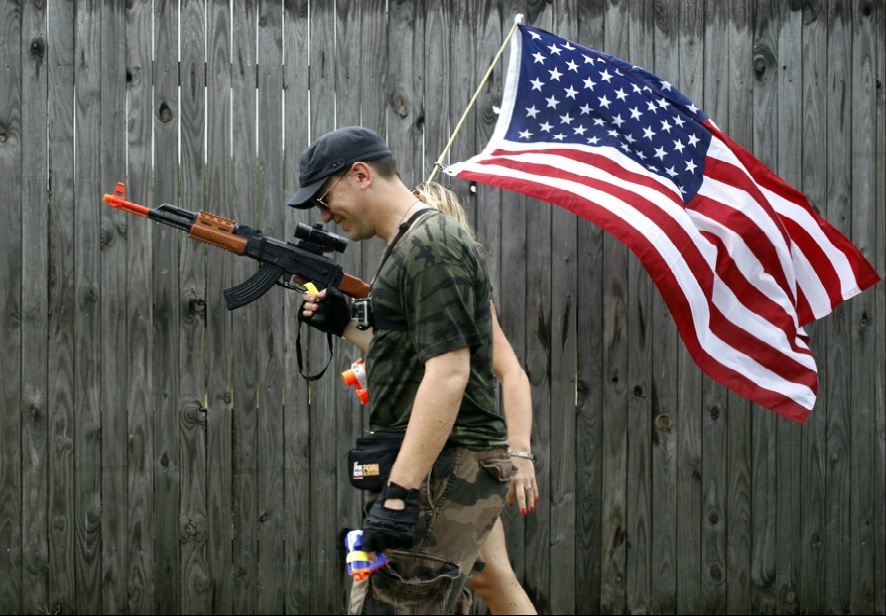 Austin Peterson of Alexandria, Va., and 13 others marched with toy guns in Washington DC in 2013 in support of the Second Amendment and Toys for Tots. SHFWire photo by Robert R. Denton.

I was watching a weightlifting competition in a Juarez gym not too far from my old home near Plaza Juarez Mall in 2009. As I sat near the stairs toward the back of the gym, a young man was struggling to lift an absurd amount of weight when two men who did not seem interested in the competition came in through the back entrance .

I remember hearing a loud metal clanging noise like the sound of weights dropping, followed by gun shots. Everything after that is a blur — running up the stairs, finding a place to hide, people screaming. Only one particular detail remains clear, the jet black 9mm handgun in the killer’s fist. Two men were shot dead in that gym that day.

In the 12 years I lived in Mexico, where it is illegal for civilians to own guns, I never saw a gun up close until that day. That traumatic event made me aware of the false sense of security that one may have at any given moment.

After that I didn’t see a gun again until I attended Franklin High School in El Paso where a lot of my friends grew up with guns that they used for hunting and target-hooting. The concept was not only foreign to me, but scary as well.

As time went on I started to learn about gun culture in the United States as well as gun rights. This issue is currently being highlighted in Texas politics as state lawmakers debate Senate bill 11 and 17, commonly referred to as “campus carry” and “open carry.”

There are strong feelings on both sides of these issues, most recently illustrated by a statement to the 84th Texas Legislature session by Suzanna Gratia Hupp, whose parents were killed in a 1991 mass shooting at Luby’s restaurant in Killeen.

“If I’m a madman that wants to rack up a big body-bag count and beat the last guy’s body-bag count, I’m not going to an NRA convention or the dreaded gun show. I’m going to go where the Legislature has said people can’t protect themselves,” Hupp said

As of March 31 of this year, both the House and Senate have each approved their versions of open carry law for the state. Campus carry has passed the Senate, but its still being deliberated by the House. Governor Abbott has said that he will sign any gun bill that reaches his desk.

Currently, Texans are not allowed to open carry handguns outside of their private property. However, a person can open carry a shotgun or rifle as long as it is in a “non-threatening or alarming manner.”

This sets up the rather uncanny scenario where people can be seen going down the street with hunting weapons, but would be stopped by a police officer the moment they were seen carrying a handgun.

Although the law makes it pretty clear as to what Texans gun rights are, enforcement is not always consistent.

On April 1, a man in San Antonio was reportedly arrested while openly carrying his rifle while on a walk near his home according CBS Houston. The incident, which was recorded on video by the gun owner, escalated from a peaceful-yet-tense exchange between the man and police officers, only to culminate with the cops using a Taser on the man before he was arrested.

Those who support gun rights in Texas saw this as a violation of rights and a lack of proper judgement by the officers. For those in favor of gun control, it became an example of people being the ones that create problem, not guns themselves.

Sometimes it is residents who aren’t clear on the law. According to KTAB News in Abeline, two men, Rande Scott Fighmy, 56, and Trey Best, 26, were arrested at a local Whataburger for openly carrying firearms inside the restaurant. Fighmy said he thought Texas was an open carry state.

The National Rifle Association has cautioned open carry advocates against radical demonstrations that hurt their cause.

“Let’s not mince words,” the NRA said in a post on its website. “Using guns merely to draw attention to yourself in public not only defies common sense, it shows a lack of consideration and manners. … That’s not the Texas way. And that’s certainly not the NRA way.”

While the University of Texas at El Paso has not issued an official statement on the current legislation debate, UT system Chancellor William H. McRaven said on a campus carry conference back in March that he has been receiving a number of calls and emails from parents and students worried about the potential for concealed carry on campus.

“There is great concern that the presence of handguns, even if limited to licensed individuals age 21 or older, will lead to an increase in both accidental shootings and self-inflicted wounds,” McRaven wrote in an open letter addressed to the Texas legislation.

He also said campuses can be grounds for unstable students who have to cope with grades, depression and other emotional burdens that may make them unfit to be carrying a gun.

McRaven is not alone on this thinking, as a June 2013 University of Texas and Texas Tribune poll shows that 48 percent of those polled opposed concealed weapons on campuses, but 46 percent were in favor. An update of the poll in February 2015 shows that now 47 percent support campus carry and 45 percent are opposed. The survey of 1,200 registered voters has a reported margin of error of plus or minus  2.83 percentage.

Its important to point out that Texas A&M Chancellor John Sharp backs the campus carry bill.

“The real question is this, do I trust my students, faculty and staff to work and live responsibly under the same laws at the university as they do at home? Of course I do.” Sharp said.

The issue is complex in a border community like El Paso, where guns are a part of everyday life for Fort Bliss soldiers and law enforcement agencies and their families. Hunting and target shooting are also a large part of the culture. Supporters point out that proper gun education is necessary for individuals to be responsible gun owners.

But the influence from our neighboring country, Mexico, also plays a role in attitudes on guns. Mexico does not allow civilians to own or carry any weapons. But, while guns are strictly limited to law enforcement and the military, the country has seen a lot of criminal violence in the years-long bloody drug war.

At its worst Juarez saw more than eight murders a day – mostly shootings. This led to a lot of fear throughout the city and a aversion to weapons among Juarez residents who influence family, friends and business contacts in El Paso.

Those people might not be very welcoming to the idea of people sporting guns, regardless if they have been approved by the state or not. Their opinions are just as important to El Paso and Texas as any other citizen.

As we await the decision of Texas leadership, we can only continue to speculate what the results may bring. Texas is a big state and the potential of so many guns out in the open could be scary to many and may just end up providing a false sense of security to others.

Editors note: This opinion article was updated May 11, 2015 to correct the name of the university system for Chancellor John Sharp to Texas A&M as well as provide links and data from the most recent University of Texas / Texas Tribune survey in Feb. 2015.