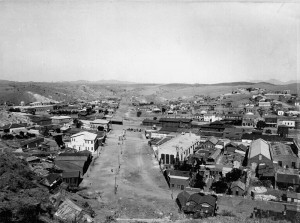 The Battle of Ambos Nogales protects us from border violence today

In Ambos Nogales the narco-violence prevalent in most U.S. – Mexican border cities is less; the lower level of violence is a direct result of the community connection that existed before and since the “Battle of Ambos Nogales” on Tuesday, August 27, 1918.

EL PASO—Two Hispanic students stood up in protest as the rest of the audience in the auditorium clapped during Homeland Security Secretary Janet Napolitano’s recent speech at the University of Texas at El Paso. The female students held up signs that read “Education not Militarization” and “Security to Whom?” but only for a few seconds before they were escorted out of the auditorium. As this occurred, I wondered if their removal from a public forum is a violation of their freedom of speech.  So I asked the question during my next Communication Law class and found out that what had happened is like screaming fire in a crowded theater: “You can say anything you like as long as you don’t put anyone in danger; Napolitano could claim she was in danger,” said Dr. Barthy Byrd, associate professor in the Department of Communication and an expert on media law. Napolitano barely looked up from the paper she read during her speech to acknowledge what had just happened in the audience.  Afterward, she answered a few pre-selected questions that only demonstrated she really does think we owe her our gratitude for protecting the U.S. Southern border. “Some of the safest communities in America are right here on the border,” said Napolitano, claiming that she was not here doing a victory lap.

‘Call of Juarez’ continues to show the cultural divide

Can videogames ever be taken seriously? Ubisoft, the third largest multi-platform publisher announced Feb. 7 that  they will release the third game in the “Call of Juarez” series, developed by Techland. The latest entry, “Call of Juarez: The Cartel,” allows the gamer, as the press release says, to “embark on a bloody road trip from Los Angeles to Juárez, Mexico, immersing yourself in a gritty plot with interesting characters and a wide variety of game play options.” Very little, aside from a vague press release and few screenshots (which really look more like concept art) has even been released on the game.

Napolitano did mention that challenges still exist, such as dealing with the drug-cartel violence taking place in Mexico and remaining on guard against a possible spillover effect into the United States. Any incursion of drug-war violence into the U.S. will face an “overwhelming response,” she said.