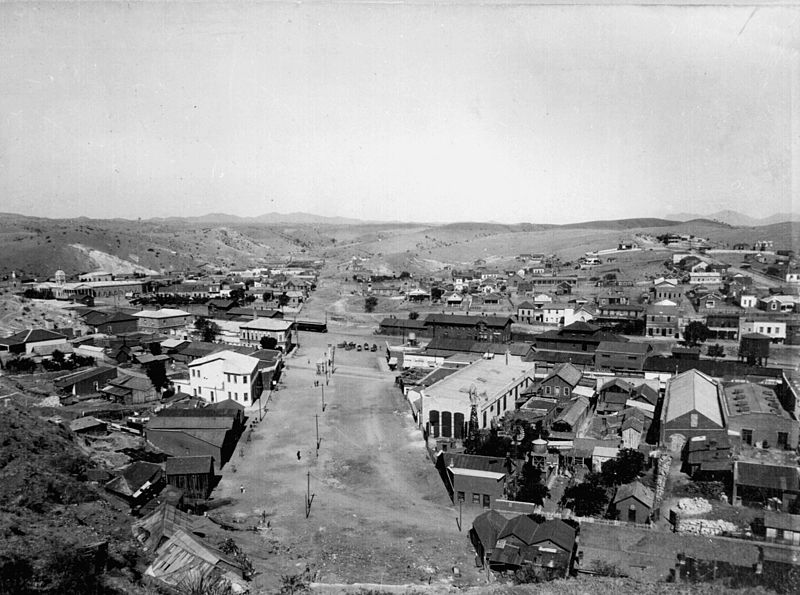 “… citizens on both sides of the border to agree to the proposition of the wiping out of the imaginary international line and uniting of two Nogales’ into one general Nogales. The obelisks marking the border line were proclaimed monuments of unity and not division.” –Nogales Herald July, 1918.

NOGALES, AZ – The narco-violence prevalent in most U.S.-Mexican border cities is less in Ambos Nogales – a direct result of the community connection that existed before and after the “Battle of Ambos Nogales” on Tuesday, August 27, 1918. In spite of the fatalities, the incident reinforced the historic cross-border friendless that continues today. This cross-border unity is reflected in the informal name of the cities, “Ambos Nogales” or “Both Nogales.” Memory of the day Mexican federal forces shot at the United States 10th Cavalry and the 35th Infantry has faded, yet incidents such as the 1918 shooting battle brought closer ties to this one-city divided by a political line.

In almost any other place on earth, cross-border military engagements would result in all-out war between the nations. The historic socio-cultural and eco-political ties in Ambos Nogales prevented an all-out international incident.

The Battle is marked in song, film and title. The corrido, “El Corrido de Nogales” from “Heroes and Horses: Corridos from the Arizona-Sonora Borderlands” a collection by the Smithsonian Folkways, tells the story of the heroic battle in song. The film “La Mera Fontera” by Louis Hock tells the story in an excellent art documentary and the official name of Nogales, Sonora is “Heroíca Nogales.” The term “Heroíca” is reserved for Mexican towns where great battles were fought.

Historically and currently, the trans-border attitude in Ambos was and is always different from other border communities. In July of 1918, one month before the Battle, the Nogales Herald reported on a cross-border community meeting hosted by General Obregon that reflects the attitude of many of Nogales’ citizens today:

The get-together of the chambers of commerce of Nogales, Sonora and Nogales, Arizona, held last night at the San Carlos Club, has the possibility of becoming a great historic occasion. The meeting marked the first attempt of bodies of citizens on both sides of the border to agree to the proposition of the wiping out of the imaginary international line and uniting of two Nogales’ into one general Nogales. The obelisks marking the borderline were proclaimed monuments of unity and not division. The proposition was adopted as the sentiment of all present. Honorable E.M. Lautin, the American council at Nogales, Sonora paid marked compliments to the courtesy, cooperation and friendliness of the Mexican people at this point on the border. He said it eclipsed conditions elsewhere on the Mexican-American line. The featured edible at the luncheon, garbanzos in several forms, was provided by General Obregon. The meeting was brought to a lively close in a boxing match of five rounds between two privates from the 35th infantry.” (from “La Mera Frontera”, Luis Hock, 1997)

To their dismay, a few weeks after this historic occasion, the citizens would be shooting at each other across the international line. Yet the Battle would not create greater conflict and animosity, but greater unity.

Today, much of the border is embattled with narco-violence, but as E.M, Lautin pointed out in July, 1918, “…the friendliness of the Mexican people at this point on the border eclipsed conditions elsewhere on the Mexican-American line.”

Still, the border was tense in WWI. Germany was motivated to create diversionary tactics near U.S. soil. According to Jeff Gudinkauff, a resident Nogales expert on the Battle, “There were border skirmishes and battles all along the border from El Paso to San Diego in 1918, probably organized by German agents after the Zimmerman note was discovered.

In fact, it was reported that two German agents were killed in the Battle of Ambos Nogales, yet no hard proof of that fact exists.”

Whether a fact or not, the possibility of Germans at the border in México was reason enough for strong U.S. presence on the border.

The Battle was captured in the 1997  art-documentary film “La Mera Frontera” by filmmaker Louis Hock. In interviews with Nogales icons present as “witnesses” at the Battle. The film shows Nogales in a previous time, before the wall. In the film, María Esquivel “returns” as a ghost to ask why she is not remembered as one of those killed in the battle.

In the movie notes, Hock writes “Among the many citizens who lay dead was María Esquivel, who “returns” in the present to interview surviving witnesses, all now 80 to 90 years old. As a stymied historical detective, María wrestles with the failure of Nogales’ citizens’ accounts to coalesce or recollect her and her absence in the local archives and films. Unable to uncover her past, María takes history into her own hands.”

The movie is well-made and artfully directed. It stars many long-time Nogales icons such as Charlie Fowler, Charles Wise, Louis Escalada, Sidney Rochlin, Ernesto Celaya and Alivin Sisk publisher of the Nogales Herald as “witnesses”. Included is an interview with current Nogales City Council person George Biggs. Yareli Arizmendi, the star, as the ghost María. Arizmendi also stared in: Like Water Like Chocolate, The Big Green, NYPD Blue, Murder One, The Cisco Kid.

The Battle of Ambos Nogales has faded from memory but remains part of the fabric of Ambos Nogales. The killing of Mexicans and Americans on that day brought the communities closer and that historic symbiotic relationship continues.

Today with narco-violence so apparent in most border cities, we can be thankful, that for the most part, we Nogalenses learned from the violence of that day to work together in peace.