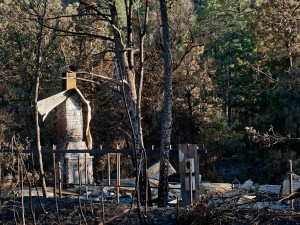 LINCOLN NATIONAL FOREST, NM – The Little Bear Forest fire started with a lightning strike on June 4th, consumed more than 43, 000 acres and destroyed 254 residential and commercial structures. It also brought together people from around the nation and within the community to help those families devastated by the loss of home and property. The homes that were destroyed by the fire consisted of a collection of permanent residences and summer homes, but no matter what type of structure they were, the owners and leasers have lost a important part of themselves. For many it was impossible to save family heirlooms and mementos from the fire. “We live in Albuquerque,” said Christine Moore whose family shared her childhood home as a summer home, “so we didn’t know anything about it till early the next morning.”

With many people affected adversely by the fire there has been an outpouring of support and generosity from within the Ruidoso community as well as from outlying communities such as Las Cruces and Albuquerque.

Growing up within Freemasonry

EL PASO – For most of us childhood memories consist of lives involved with friends, family, school – precious memories we hold dear as we grow old. But what kind of memories do people treasure when their fathers are involved in Freemasonry, one of the oldest fraternal organizations in the world and what effect does it have on their lives? “Growing up with my father being a Mason was very enjoyable for me,” said Steve Miller, the current Worshipful Master for Fraternity Lodge 1111 and 2012 Potentate for the El Maida Shrine. “It made my days in school shorter. Yes, I had to keep my grades up in order to do what was required to go on the trips that my mom and dad and I used to have to go on.”

But what is Freemasonry? 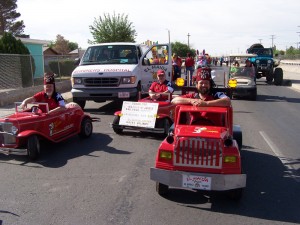 EL PASO – It’s a parade! Flashing headlights and light bars on vehicles, cheerleaders of all ages, people on horseback, floats, clowns, VIPS in vehicles and on floats. We’ve all seen them in parades as we stand on the sidelines with cameras as they pass by, but nothing compares to vantage point I got during the Northeaster Parade held on April 7th, 2012 in Northeast El Paso, where I was able to be in the parade for the first time. That was an experience beyond comparison. My morning started when I awoke a little after 7 a.m. after sleeping for about four hours, having gotten out of work a little after 2 a.m., and getting home and to sleep around 3 a.m. I may have slept only a few hours, but I felt energized and ready to go. 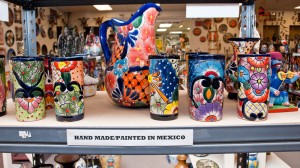 EL PASO – The North American Free Trade Agreement, (NAFTA) created 18 years ago spawned millions of jobs in Mexico, sending $160 billion in business south of the border. “Never did we expect during the negotiations the success that NAFTA has had,” said Dr. Herminio Blanco, founder of Soluciones Estratégicas and former Minister of Trade and Industry for Mexico. Speaking to students and faculty at the The University of Texas at El Paso February 7, Blanco said, “Mexico has been able to attract $160 billion. Never would we have thought that possible.” The number of jobs created in Mexico by NAFTA is difficult to establish, he said, “…but definitely we’re speaking about at least 2 million families that have jobs directly created by investments that came to Mexico because of NAFTA.” 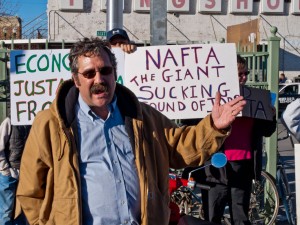 The Occupy movement took on NAFTA at the Santa Fe Bridge

EL PASO –  While most folks celebrated New Year’s Day with family and friends thinking about those unachievable resolutions, some two dozen people from Occupy El Paso and Occupy Las Cruces flocked to the Santa Fe Bridge, also known as the Puente Del Norte (PDN or Bridge of the North), to protest the North American Free Trade Agreement (NAFTA), which marked its 18th year on January 1st. With signs demanding an end to NAFTA (Have ta End NAFTA, Free Trade isn’t free, NAFTA Cost Us Our Jobs and the like), members of the Occupy Movements accompanied by members of the El Paso Chapter of The Brown Berets held what they referred to as a teach-in where speakers would speak against NAFTA. “This is one of the ways that we can work on the overall goal which is to make the public aware of the disaster that the last 18 years of NAFTA have been,” said Joe Heyman a volunteer with Occupy El Paso and a Professor and Chair of Sociology and Anthropology Department with the University of Texas at El Paso. Some of the complaints listed in a pamphlet handed out by participants at the rally were that NAFTA has cost 682,900 U.S. jobs, including 35,000 from El Paso, the disparagement in pay between U.S. and Mexican factory workers, and that trade is responsible for 15% – 25% of the growth in wage inequality in the U.S.

One of the speakers at the rally, Lorena Andrade, a member of Mujer Obrera, an organization for working Mexican women, said that the majority of the 35,000 jobs lost belonged to women, most of them older than 50 years of age, with very little English and a low level of formal education. NAFTA is the free trade agreement between Canada, the United States, and Mexico which was designed to facilitate International Trade between the countries by opening the borders of each nation to the commodities of the other two member nations and in doing so create the world’s largest free trade area.

Taking the canvas out of the frame

EL PASO — I belong to art and photography groups in El Paso and a couple are non-profit organizations. In one, I serve on the Board of Managers. The President of that association was looking to change the style of leadership that had been used. The President empowered the Board saying take charge of your responsibilities, think outside the box, if you need assistance let me know. How did I become involved?

Guns on campus – What’s your stand?

EL PASO – The Texas Legislature is considering allowing students and professors with concealed handgun licenses to carry their firearms on college campuses.  The bill in draft form has been approved by committee and is headed to the Texas House for a vote, where a majority favors the measure

In 2009 a similar bill failed in the Texas State Legislature. This year though, gun control advocates say that it will be more difficult to stop this bill. If passed and signed into law by Gov. Rick Perry as expected, Texas would become the second state after Utah to approve this type of legislation. The topic of firearms on campuses is of growing concern for everyone possibly affected, whether students, parents of a student, faculty and staff at a college or university or members of the police forces responsible for the safety and security of everyone on campus. Students and faculty members here at the University of Texas at El Paso expressed the following opinions and concerns:

“I don’t agree with it,” said Evi Marquez, a student, “because I think it would be another threat especially with the war going on across the border with the drugs and everything and you know its been said that people come and use the cars here at UTEP as a loading zone for the drugs and as far as for bringing weapons into that it would be so much more dangerous that you never know what could happen.

Napolitano did mention that challenges still exist, such as dealing with the drug-cartel violence taking place in Mexico and remaining on guard against a possible spillover effect into the United States. Any incursion of drug-war violence into the U.S. will face an “overwhelming response,” she said.