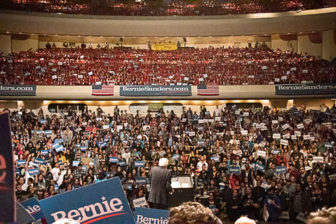 EL PASO – Democratic presidential hopeful Bernie Sanders fired up a nearly full Abraham Chavez theater Saturday while also heading to victory in the Nevada caucuses, hitting all the high notes and exciting his fans. Vowing to “end the hatred,” Sanders promised to change current immigration policy and no longer “snatch a baby from her mother” if people are crossing illegally and end ICE raids. The highly supportive crowd of nearly 2,500 cheered. Sanders has been critical of Trump’s policies and rhetoric, which he’s repeatedly referred to as racist and xenophobic. Before attending the rally, Sanders visited the memorial for the Aug.