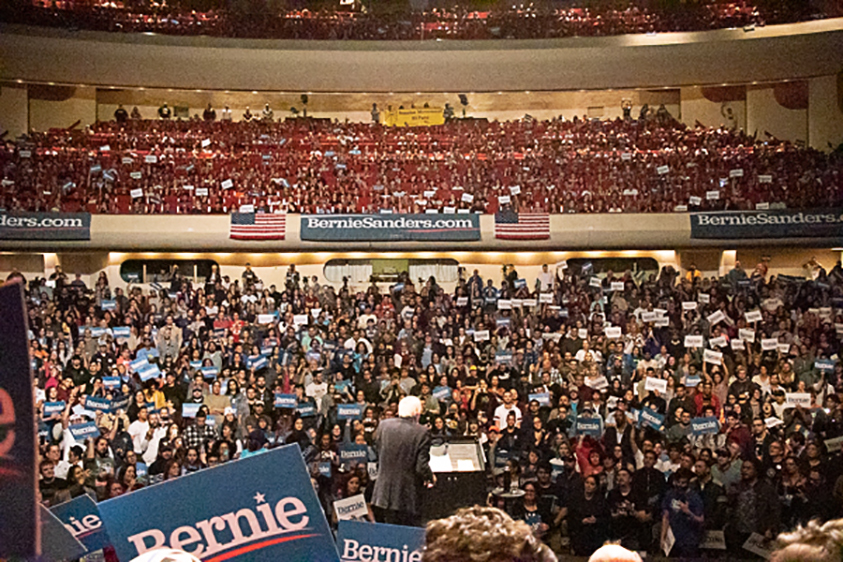 Vowing to “end the hatred,” Sanders promised to change current immigration policy and no longer “snatch a baby from her mother” if people are crossing illegally and end ICE raids. The highly supportive crowd of nearly 2,500 cheered.

Sanders has been critical of Trump’s policies and rhetoric, which he’s repeatedly referred to as racist and xenophobic.

Before attending the rally, Sanders visited the memorial for the Aug. 3 mass shooting, where 22 people were killed by a white supremacist who targeted Hispanics at a central El Paso Walmart.

His support has increased in Texas since the Iowa caucuses and the New Hampshire primary, placing him as the front-runner in the state, according to two polls from early February.

Mary Silva, 32, and Bernadette Silva, 28, went to the event excited about Sanders’ chances of winning the nomination and the presidency.

“If we can win here in Texas, Trump is finished,” Sanders said about incumbent President Donald J. Trump.

“I think he has a really good chance, a very good chance,” Mary Silva said, “I think it will be hard getting him through Texas, but I think he can do if there’s enough people that work together and stuff, yes I do think we can make a difference.”

“If the message can break through and hopefully reach people, then I think he has a chance to win in Texas,” Bernadette Silva said.

They said they supported the senator’s candidacy because of his stance on the environment and his endorsement of the Green New Deal.

“It’s exciting to hear someone so progressive, I’m really excited about the climate, like I think that’s a very big issue so it’s good to hear that he’s getting there, I think it’s a very good deal, it’s hopeful,” Mary Silva said.

“Hopefully this means that his message is resonating with people around the U.S. and again in Texas, climate change is very big deal to me, so I’m hoping he gets the nomination and it leaves me really hopeful and excited for this,” Bernadette Silva said.

“Climate change is not a hoax. It is the greatest possible threat,” Sanders said. “I kinda trust the scientist over Donald Trump.”

Tania Silva, 31, a resident of El Paso, said she has been supporting Sanders since 2015

She added that she would not support any other candidate if Sanders doesn’t secure the nomination.

“I’m here to support the best candidate that the United States has seen in a very, very long time, I’m here to show my energy and enthusiasm for Bernie Sanders,” said Ruby Montana, 38, a humanities lecturer at the University of Texas at El Paso and El Paso Community College.

“Really he’s the only candidate that has such an amount of integrity, and zeal, and a moral compass, and ethics, and morals, and right now we don’t have that at the White House at all, in fact we have the complete opposite,” Montana said.

She described Trump in a similar way to how Sanders described him during his speech as a xenophobe and a liar.

Hira Ali, 23, a pre-med student at UTEP who wants to become a doctor, said she has supported Sanders since the last presidential election.

“I feel that his advocacy for healthcare for all will actually help change the healthcare system for the better, I actually think it will work, and it will benefit doctors and patients alike,” Ali said.

Rodrigo Rodriguez, 23, another UTEP student said he supports Sanders’ proposal for free college tuition because he currently struggles to pay it, and even though he doesn’t know much about his whole platform, that really resonated with him.

Some of Sanders’s messages that have excited young people are cancelling student debt and public universities and colleges tuition free.

“He’s a good man, his policies are strong and he’s always had a plan, I supported him in 2016 and I still support him now,” said Brisa Rodriguez, 18, a UTEP student from Austin.

In 2015, El Paso had the seventh largest percentage of foreign-born residents among 104 top U.S. metros, according to a report from El Paso Times.

Rocio Fierro Perez, 24, moved to El Paso when she was 3 years old and is in the process of becoming a U.S. citizen. She said she was motivated by the senator’s message, and even though she was not able to vote she wanted to participate as much as she could.

“It is particularly important to me because although I wasn’t born here, I’ve lived here my whole life,” she said.

Shedrick Allen, 35, was born in Frankfurt, Germany in a military family. He’s been a resident of El Paso for 13 years and said he supports senator Sanders because he feels that other candidates from the two larger parties have failed the average citizen.

He said he was confident that Sanders will be able to gather support from people both in the left and the right.

Valeria Terrazas, 27, who works in El Paso but lives in Juarez said she thinks that Sanders can win the nomination because he has more support than any other candidate.

Nevertheless, she said that Sanders might not be the favorite candidate for many business owners and wealthy people, but emphasized that the majority of people supported him.

During his speech, Sanders criticized the incarceration rate of people of color and proposed ending the war on drugs, while preventing corporations from monopolizing the legal market for marijuana. “There are more people in jail here than another other country,” Sanders said, noting the high numbers of Hispanic and African-Americans in prison.

Sanders also said he would end the cash bail system in the United States because many poor people are in jail and can’t make cash bail while they await trial.

“I like a lot of his ideas, I hope he keeps pushing the peace button I love that, the world can’t stand too much more,” said Thomas Valle, 69, who drove from Ruidoso with his daughter and her boyfriend.

Despite the big support for Sanders’ proposals and his rise in the polls, not everyone at the event were so confident about Sanders winning the presidency.

Debbie Nathan, 69, an anti-deportation advocate, said she has been supporting the senator for a while, but is concerned that people won’t support him because they think he’s too radical.

“I do support his platform, but probably like many many other people I’m terrified that he’s going to be red baited, and he’s going to be called a Communist, and I’m really worried about whether he could win or not,” Nathan said.

She also said that if she was not supporting Sanders, she would support candidate Elizabeth Warren, but she’s worried that people won’t vote for her either.