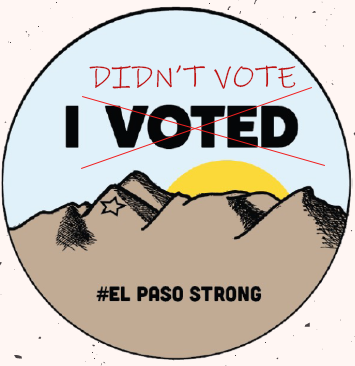 Some El Pasoans decided not to vote in this year’s highly contested election for a variety of reasons, among them because they said their vote in heavily Republican Texas has little consequence.

“Living in Texas, if you are not going to vote for the Republican party, then you might as well not vote with the winner-takes-all style of the election that the U.S. has,” said Nikolaus Frank a nineteen-year-old college student. “That’s one thing that made me not care because I just know Texas is not going to turn blue.”

Each party selects its own group of electors, each state then empowers these electors who represent the candidate who won the most votes, the presidential candidate who reaches at least 270 electoral college votes wins.

Julien Esquivel, a 21-year-old college student, echoed Frank’s sentiments: “As the overall popular vote doesn’t matter and Texas has always been red, I don’t see a point. However, if electoral points were split, and not a “winner-take-all,” I definitely would vote. As long as the winner takes all is in effect by states, not every vote matters.”

While El Paso solidly supports Democratic candidates, Texas has not voted blue for a president since Jimmy Carter defeated Gerald Ford more then 40 years ago. Since then, the state has been consistently a Republican supporter.

This trend in the Lonestar state discouraged these voters from voting for either candidate regardless of their political beliefs.

Esquivel said he strongly believes that presidential candidate Joe Biden is more than qualified for the job.

“I would strongly prefer Biden as his priorities towards COVID control and climate change are my two most important areas of concern,” Esquivel said. “Biden, who has worked in government for years and served as vice president to one of the most popular presidents in modern history, is fully qualified in my opinion. Trump, on the other hand, has no knowledge or skill sets that would qualify him for the position.”

Alejandro Becerra, 24, and Sarah Dominguez, 22, also said they supported Biden, but also chose not to vote.

Biden won El Paso with 168,801 votes, according to the El Paso County office’s unofficial election results. El Pasoans also voted overwhelmingly for Democrats in every other category, including U.S. senator.

“If I had to choose, I suppose I rather see Biden, he has had much more experience and can relate to us as citizens in a way… even though Biden doesn’t sit right with me, I can’t see someone as Trump run this country another four years,” Becerra said.

“I feel like Trump has kind of defined Republicans for me and everything I hear from him is mostly negative. So that’s why I feel I lean more toward Democrats but not because of actual political reasons more so from social media and the comments I hear,” Dominguez said.

The two also said their votes would not make a difference in the election or on how the country would be impacted. “I’m just one small vote … with Joe Biden and Trump, they make Biden kind of sound like he is losing it in a way and that he isn’t all there, and then Trump they always make him sound like a bad person, so to me it’s pointless to vote,” Dominguez said.

As ballots were being counted, news outlets were saying that every ballot needs to be counted especially in states like Arizona, Georgia, Nevada, North Carolina, and Pennsylvania, where their results can make the difference in who will be the next president in this narrow race where razor-thin margins are the norm.

“I honestly don’t know which one’s worse, they both have several rape accusations, they’re proved to be racist throughout the years, which someone can write that off as just a generational gap but still they’re going to be representing the country,” Frank said.

While Frank does say that he identifies more with the Democratic Party he finds a two-party system to be ineffective and corrupt, especially when looking at his two options.

“I don’t really believe in voting for the lesser of two evils. I just think they’re both terrible people and can’t see myself endorsing or supporting either one of them,” Frank said. This belief has created some tension with his family, during the election season.

Frank’s mother was upset with him because of the family’s view on the importance of voting. His grandparents from Mexico used to have to pay to vote, but always chose to do so due to the belief that it was the most important thing they could do.

The COVID-19 pandemic played a significant role in discouraging Becerra and Allyson Palombo, 29, from considering voting this year. El Paso has seen record-breaking cases in the virus with more than 20,000 active cases.

“I decided not to vote this year due to the ongoing issue with COVID, and putting myself at risk for a single ballot,” Becerra said.

Fear of catching the virus did not discourage El Pasoans from voting. The city broke early voting records. Precautions were taken at the polling sites in El Paso as far as maintaining social distancing, wearing masks, and providing finger covers when voting.

Palombo said: “I would have voted for the Republican Party. However, as of right now, I in fact did see both candidates unfit to be president. With so much hate towards Trump, I did not feel comfortable voting for him.”

“Although I do care for who runs this country, I believe my single ballot wouldn’t make a difference in the millions of votes. All in all, election day to me is just another day,” Becerra said.

“At this point, I do not have a preference. As chaotic as the world has gotten, something needs to change. I just wasn’t sure which party could help make that change,” Palombo said.