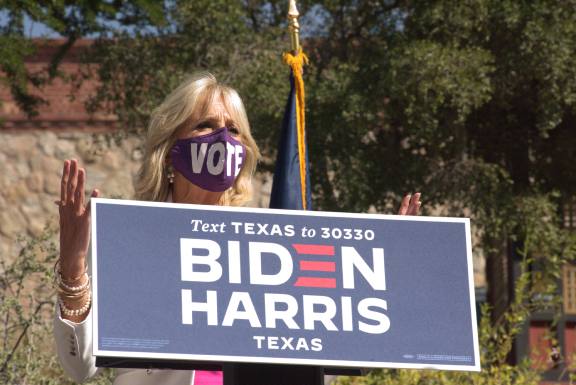 Speaking to a small, socially distanced group of supporters at the University of Texas at El Paso, Biden urged people to get out and vote, saying that “for the first time in a long time,” the Democrats have an actual chance at flipping Texas from Republican rule and defeating President Donald Trump in this election.

“With Joe as president you won’t read the news, shaking your head … or go to bed worrying about what our government is going to do. Because he’s going to be someone who brings out the best in us. Someone our kids can look up to,” Jill Biden said.

“These last four years have been some of the worst four years of our generation. We have seen the most incredible cruelty, coming from the White House,” Escobar said. “Hate crimes are up, racists are given license to expose their racism. The country has never been more divided.”

Like Jill Biden, she said she believes Joe Biden will be able to flip the state.

Countering President Trump’s incorrect past claims that the border fence made the city safer, former presidential candidate Beto O’Rourke told Jill Biden that El Paso “is one of the safest cities” in the U.S.

“That is not despite the fact that we are a city of immigrants who come from the world over to find a home right here in El Paso, Texas,” O’Rourke said. “It is precisely because more than a quarter in this community were born somewhere else, that we are so safe, that we are so successful. Their presence, their perseverance and their tenacity in the face of the longest odds has made us far better than we otherwise would be.”

Mentioning the Trump administration’s policies on immigration and asylum seekers and the Aug. 3, 2019 mass shooting at an El Paso Walmart where the attacker said he came to kill Latinos, Escobar said Trump “does nothing but stoke hatred and division” and that the city “beared the brunt of that awful burden.”

“I’m hearing there are already really long lines to vote, so people are really eager to vote,” Escobar said. “Vote like your life depends on it … There has never been a more important election in our lifetimes, never.”

J.J. Martinez, a UTEP senior majoring in philosophy and president of the El Paso Young Democrats, encouraged more people to vote, saying the Nov. 3 election will impact not only the current generation, but also generations that follow.