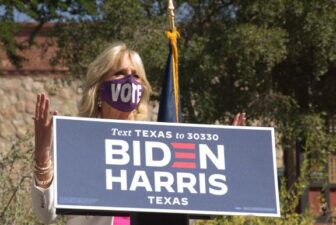 As early voting started in Texas, Jill Biden, Democratic presidential candidate Joe Biden’s wife, began her tour of the state Tuesday morning in El Paso, not far from the Mexican border.Speaking to a small, socially distanced group of supporters at the University of Texas at El Paso, Biden urged people to get out and vote, saying that “for the first time in a long time,” the Democrats have an actual chance at flipping Texas from Republican rule and defeating President Donald Trump in this election.“With Joe as president you won’t read the news, shaking your head … or go to bed worrying about what our government is going to do. Because he’s going to be someone who brings out the best in us. Someone our kids can look up to,” Jill Biden said.Former presidential candidate Beto O’Rourke, U.S. Rep. Veronica Escobar, D-El Paso, and state Rep. Evelina Ortega joined Jill Biden on the stage at the event to energize voters and garner support for Joe Biden’s campaign.“These last four years have been some of the worst four years of our generation. We have seen the most incredible cruelty, coming from the White House,” Escobar said.