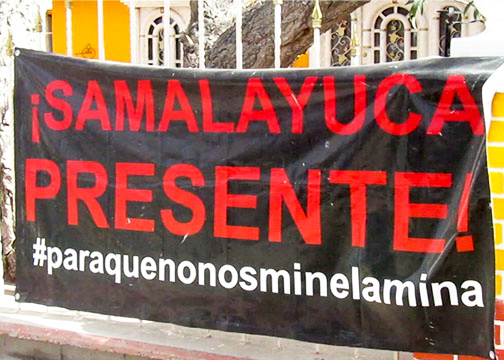 A sign from the group Para Que No Nos Mine La Mina hangs in front of a house in Samalayuca on Sunday February 2.

SAMALAYUCA, MEXICO — Residents of this small farming town in northern Mexico petitioning authorities to stop a copper mine from opening have managed to temporarily halt the project.

They started protesting last August after the Canadian mining corporation VVC Exploration announced plans to open the mine ‘La Gloria’ in the Samalayuca desert.

A district judge on March 5th ordered the suspension of the mining project for at least five months, according to a report from El Diario de Juarez newspaper.

But opponents know the fight is far from over in Samalayuca, a small agricultural town in Chihuahua about 35 miles south of El Paso-Ciudad Juarez border.

Samalayuca is home to about 1,126 residents and many are concerned the mine threatens their health and way of life.

“Samalayuca is agricultural, it is not a mining town, and the mine will generate contamination affecting our children in the future,” said Ramiro Herrera, a landowner, resident and farmer from the area.

His family has owned land in Samalayuca for generations. He was among residents and other mine opponents who staged a demonstration during a visit by Mexico’s president in January.

“We’ve been protesting. When the president came to Juarez, we protested, and he said there won’t be a mine,” Herrera said.

President Andrés Manuel López Obrador announced that nothing will proceed without support of the people. Local political leaders with the president’s party MORENA have sided with opponents of the mine.

“All mines contaminate, and more so this one which will have an open-pit. We’re joining forces so that this mine never opens. We are speaking with the corresponding authorities as government representatives, and at the moment they’re supporting us to stop the opening,” said MORENA Municipal Executive Committee Coordinator Luz Elia Marín Renteria.

Marín Renteria claims that a majority of residents oppose the mine, but clarified that there is still some disagreement among landowners who are renting their land to the mining company.

There is also strong support for the from Javier Melendez Cardona, presidente seccional of Samalayuca, the equivalent of a mayor.

Melendez Cardona, has repeatedly said that the mine represents a $4 Billion investment that will generate taxes that can be used to improve education and medical infrastructure in the small town.

In 2019, Melendez said that the mine would help reduce unemployment in Samalayuca which he estimated was at 63 percent at the time, according to an interview with El Norte, a digital news source in Ciudad Juarez.

Some residents dispute that claim. “Samalayuca doesn’t need a mine. Here, whoever doesn’t work it’s because they don’t want to, whether they’re men or women,” resident Aída Sapien said.

“I’ve always been in favor of small town development but if there’s a negative impact to us or to the children, who will really suffer the consequences? I think it shouldn’t be done,” said Celso Rodriguez Flores, a resident from Samalayuca, about the mine.

Oswaldo Alvarado, a landowner in the area said he was completely against the project mainly because of its impact on the environment, local economy and the stability of the town.

In response to the environmental concerns, local officials have said there will be certain environmental protections, according to several local news reports in August when the company announced it was planning to mine copper in the area:

Another concern is that the local agricultural economy will suffer because much of the produce that farmers in the area currently sell and export to the US will no longer be purchased due to possible contamination, according to Alvarado.

“There will be an impact on crop production,” Alvarado said. He said farmers grow tomatoes and squash. “There are already people exporting to the United States, but they already said that if the mine opens they will stop buying produce from Samalayuca,” Alvarado said referring to US produce buyers.

Rene Cereceres, another resident was torn about whether to support or oppose the mine. “The benefits are in the economy, the job opportunities for the people here in the town and well, yes the economy will improve. On the negative side, there’s the contamination, the crowds of people in the town, and the increase in crime,” Cereceres said.

During the 16th of September, Independence Day Parade in nearby Ciudad Juarez, activists and residents staged a protest directing their complaints to Ciudad Juarez mayor Armando Cabada Alvidrez.

That same month, the company announced it had received Environmental and Land Use Change Permits to operate the mine, according to VVC.

“VVC is aggressively seeking to convert its near production copper project, Samalayuca, to pilot, then full, production,” according to a press release posted on the company website.

The acres of white sands of the region earned Samalayuca ‘natural protected area’ status by presidential decree in 2009 to conserve the regional “flora and fauna” as well as the territory of the sand dunes, according to the Official Journal of the Federation, which is similar to the Federal Register in the United States.

Just five years later, landowners from the territory of ‘El Ojo de la Casa’, where the mine is planned, started filing appeals to reverse the protected status of the Samalayuca region.

The governor of Chihuahua in 2015 praised amendments to the Natural Protected Area Plan to allow mining copper, gold and silver in Samalayuca.

“Thanks to the efforts and agreements with the federal government, the protected natural area is in the process of being changed, which will benefit the region (Samalayuca),” said Governor of Chihuahua Cesar Duarte Jaquez, according to VVC.

By 2017, the company had begun exploration and extraction of copper from the area for material testing. This happened briefly after they had received their first drilling permit, according to VVC’s website.

Last fall the Universidad Autonoma de Ciudad Juarez organized a public forum to discuss the environmental, economic and socio-cultural impact of the mine. Representatives from VVC were invited to participate. The mining company declined to send a representative to the forum where residents, academics, activists, and several government officials from the local, state and federal level discussed the planned mine.

A new era of mining

Firex was at the center of a controversy in Zacatecas in 2014, when the company didn’t pay 15 months of rent, worth $120,000 for the administration of a project in the central Mexican state, and laid off at least 50 employees, according to a report from La Jornada that year.

VVC Exploration did not respond to repeated requests from Borderzine for comment via email and phone.

Copper production has been in the center of controversy in the Paso del Norte region for decades. In the 1950’s copper was extracted from the Samalayuca desert area in an “artisanal mining” project and transported to El Paso to be processed at the ASARCO Smelter, according to the VVC’s website.

Asarco has a history of contamination. In December 8, 1973, the Center for Disease Control and Prevention released a document linking the ASARCO smelter in El Paso to lead absorption by residents on both sides of the border.

Asarco suspended operations in El Paso in 1999, and on April 13, 2013, the plant, including its iconic smoke stack towering over the border, was demolished.

As this new era of mining in the borderland region begins, residents on both sides of the border are worried about the impact on their health and the environment.