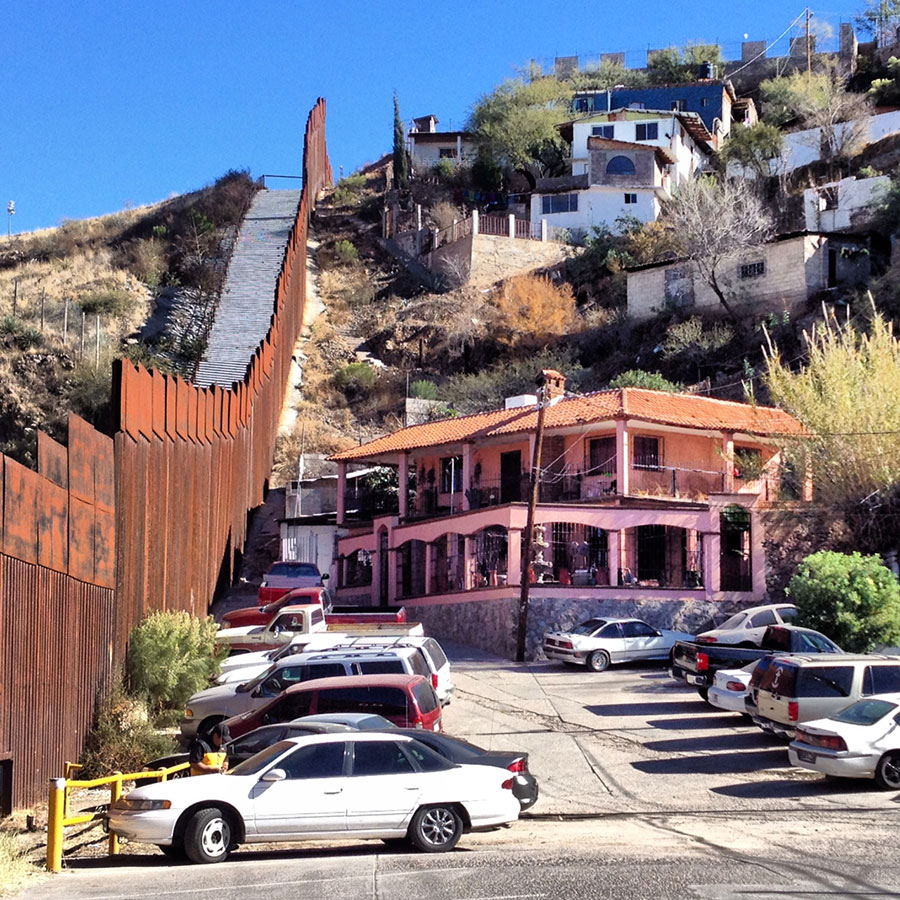 The U.S. has invested more than $100 billion on border security over a seven-year period. (Sergio Chapa/Borderzine.com) The U.S. has invested more than $100 billion on border security over a seven-year period. (Sergio Chapa/Borderzine.com)

The situation in Mexico and how it is perceived by the United States has had a significant impact on border security policy, including the current debates on immigration reform. Concerns regarding the impact of Mexico’s drug war on its northern neighbor, specifically the possibility of spillover violence, have led to a significant increase in U.S. border security spending. Possible connections between Middle-Eastern terrorism and undocumented immigration have even been claimed. This “rhetoric of fear”—a sustained dialogue that defines Mexico as an ongoing threat to the security and integrity of the United States—has been exaggerated and exacerbated by various U.S. agencies and agents, including the mass media, federal authorities, and local and national politicians.

The real effect of Mexico’s current circumstances has been a massive increase in U.S. resources spent on border security, an investment of more than $100 billion over a seven-year period. The Border Patrol has doubled its number of agents, beefed up its fencing initiatives, broadened its infrastructure, and developed new, more invasive surveillance technologies. The rhetoric of fear has created tangible and positive effects on U.S. border security. Consider the recent figures released by federal agencies, such as the DPS and the FBI, that show a significant decrease of violent crime along the U.S. southern border. These positive effects have also spilled over into the U.S. border economy in general.

The rhetoric of fear, however, depicts an insecure border that can only be secured by obtaining additional federal funds to “protect” U.S. citizens from terrorists, drug traffickers and migrants coming from Mexico, often assumed to be linked to each other. These views, for example, are included in an assessment of Texas border security commissioned in 2011 by the state’s Department of Agriculture, which described Texas as a “war zone.” A more recent document elaborated by Texas DPS supports this approach, alleging that “Mexican cartels are the most significant organized crime threat to Texas, with six of the eight cartels having command and control networks operating in the state.” The importance of the Texan discourse regarding border security cannot be underestimated since the Texas-Mexico border covers 64% of the total U.S.-Mexico border. Texas has led the debate about border security—or perceived lack thereof.

But the border reality of states like Texas conflicts with the anxieties created by the rhetoric of fear that dominates the national discourse. An improved security environment in a number of Texas border communities has been confirmed by official figures. With regards to the border economy, preliminary data show that border cities on the Mexican side of the Rio Grande are experiencing serious economic difficulties while those on the U.S. side—particularly those in Texas—are starting to benefit significantly from the human and material resources coming from the south fleeing Mexico’s violence. In fact, violence has helped stimulate economic growth and hiring in the border regions of Texas, from the lower Rio Grande Valley to Laredo to El Paso. As noted in a recent article published in the journal Politics & Policy: “Overall, the unprecedented levels of violence in contemporary Mexico have benefited the United States in the key areas of security and economic growth. The alleged negative effects of Mexico’s drug war on the United States are simply misperceptions of the actual reality.”

Despite the instabilities in Mexico, there has been in recent years a significant investment in infrastructure to promote cross-border trade between northeastern Mexico and Texas and to reinforce the linkage of these regions with the main markets of both nations, Asia and Europe. One of the most important projects in recent years is the construction of the Mazatlan-Matamoros super highway that ties the major markets in the Pacific to the northern, northeastern, and southeastern parts of the Mexican Republic. This highway is also connected with Interstate 69 (I-69), which stretches from Canada to the U.S.-Mexico border. Add to these developments the recent construction of international border crossings, such as the Donna-Rio Bravo and Anzalduas (Mission-Reynosa) international bridges.

At the same time, discoveries of oil and shale gas are reclassifying the Texas-Mexico border as an area of strategic value in terms of the trade and extraction of hydrocarbons. When taken with the recent approval of energy reform in Mexico—which privatized some sectors of Mexico’s hydrocarbon’s industry—there stands to emerge a new period of economic cooperation between the United States, Mexico and transnational oil companies in the world energy sector. This dynamic could have a transformative impact in northeastern Mexico, a zone rich in oil, natural gas and shale gas. The development of the maquiladora industry in Mexico’s border areas also continues to be of great interest to the Mexican government and transnational corporations willing to do business in the developing country.

Mexico’s drug war notwithstanding, current economic and trade developments represent a major opportunity for U.S. and Mexican corporations, especially those related to the energy sector. New investments in natural gas, shale gas and oil on both sides of the border, as well as recent infrastructure and commercial developments once energy reform is passed, will greatly benefit transnational companies, especially those located on the U.S. side. The “rhetoric of fear” is just a myopic perception that fails to consider other developments taking place within and without the Mexican “spectacle of violence,” a dynamic that has deeply injured Mexico, but not the United States.

Guadalupe Correa-Cabrera, Ph.D., is an Associate Professor & Chair at the Department of Government at the University of Texas Brownsville.

4 thoughts on “New economic opportunities on the U.S.-Mexico border amid the Drug War”