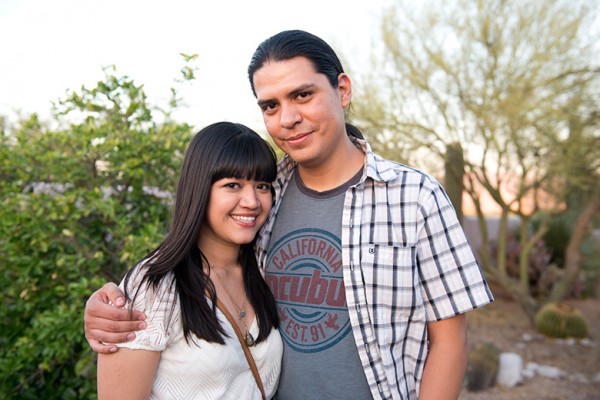 It’s been five years since my wife Danya and I first walked into the Cotton Memorial building for our introduction to journalism class at the University of Texas at El Paso. This is where we met our mentors David Smith Soto, Zita Arocha, and Lourdes Cueva Chacon. And where we learned the countless lessons we referenced every day at our internships and now at our jobs working for a daily newspaper. I was a creative writer at heart and felt comfortable with my storytelling abilities. Danya was an artistic photographer and felt comfortable telling visual stories.

EL PASO – As I start my senior year this summer studying multimedia journalism at the University of Texas at El Paso (UTEP), I realized I had to take a bigger step toward acquiring that experience we are constantly told we need. That is, building my resume even more by obtaining an internship. By the end of Fall 2010 semester, I had already sent all of my applications to several newsrooms across the country and to my surprise, I got a phone call from Washington D.C. It turned out I was one of the finalists to be selected as an intern for The Hispanic Link. I interviewed with Charlie Ericksen and he told me to wait for a phone call as they would notify me in several weeks that if I would be the chosen intern. I never got that call.

Taking the canvas out of the frame

EL PASO — I belong to art and photography groups in El Paso and a couple are non-profit organizations. In one, I serve on the Board of Managers. The President of that association was looking to change the style of leadership that had been used. The President empowered the Board saying take charge of your responsibilities, think outside the box, if you need assistance let me know. How did I become involved?

EL PASO, Texas — This past summer, I forced myself to be more involved with extracurricular activities that would build my resume. Naturally, the best and most productive thing I could do during the summer, aside from working, was to get an internship. Personally, the hardest part about finding an internship was finding out who I was. I didn’t want to commit myself wholeheartedly to an organization if my interests changed in my habitually fickle manner – from general communication studies, to creative writing, to digital media production, to multimedia journalism, to wanting to write for a music magazine. It’s hard to be motivated to do something if you’re not even sure if that is what you love most.

My intern advice: if you don’t ask questions, you never learn

EL PASO, Texas — As a senior majoring in multimedia journalism at UTEP I knew I had to obtain some work experience in my field to get my foot in the door after I graduate. This semester I was able to land an internship with KVIA ABC 7 to learn how to become a producer. Being a news junkie I thought I had this in the bag. This was not the case. Although I eventually got the hang of it, I first had to learn how to overcome obstacles.

There was once a time in my life that I felt I would never break into the degree professions.  I knew I would never be a high level executive, unless I started from the bottom and worked exceptionally hard. I also knew that many of my dreams would be inaccessible without a degree.  Teaching English abroad, working in government, becoming a broadcaster; all these things are out of reach for someone without a degree, or at least trying to gain one. One day, that changed when I made the decision to get back into school after a three-year break after graduating high school.

WASHINGTON D.C. — Hey, there’s a brave new world out there! It’s been almost two years since my graduation from college and I was very happy to have a chance to walk around the UTEP campus and run into Ms. Esther Barragan last week, who was a major part of ensuring that my experience at UTEP was filled with internships. We talked about a lot of concerns that she has been hearing from students who are a little shy about doing things like taking an internships or studying abroad, which sounds like basically a fear of doing anything outside of El Paso. I would like to spend the next couple lines sharing how doing just those things made me able to have a “Why not?” attitude, which has really helped me to find a fun life in Washington, D.C.

When I was a junior at chUTEP, do you guys still call it that? Hopefully somebody will put that on a t-shirt, which can be very lucrative for clubs.

EL PASO, Texas — It has been just over 20 years since the Americans with Disabilities Act was created to provide supplemental needs and rights to disabled Americans. It has been just over 17 years that a car accident changed a young boy’s life. Within those 17 years UTEP graduate student Adrian Villalobos has witnessed how the legislation has affected his life, and is still improving the rights of disabled Americans. “The notion of inclusion and accommodation of disabilities in society allows us to fuse together as a community,” said Villalobos, 25. “If people of disabilities are not allowed to participate in community settings we are putting them to the side.

DALLAS, Texas — So just as I am psyched up for the week I have a moment of frustration. I walk into the office and there is actually some spot news breaking in the Dallas area. This would be a great thing had I been able to cover it. Unfortunately, this coverage started a couple of hours before I was set to be in the office and another reporter was already at the press conference by the time I got there 🙁

So there I was missing the action. To make things worse, during our daily staff meeting via conference call, the Houston editor has a tendency to forget I’m in the Dallas bureau.

Time is of the essence!

DALLAS, Texas — Well, 12 weeks may seem like plenty of time. It’s really not. After working last week (week two), and getting my weekly evaluation, I’m feeling a sense of urgency to get my enterprise stories written. I have been working on one in particular that I want to wrap up. It’s been challenging getting a few details squared away, but if all goes well, I should be able to have it done next week.