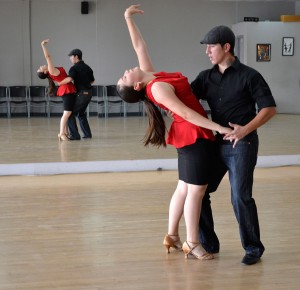 ¿Bailamos? An invitation to ballroom dancers of all ages

EL PASO – A studio tucked away in a little strip shopping center on the west side of town teaches ballroom dancing to dancers of all ages, from all walks of life. The reasons why they came to this studio vary from curiosity to losing a bet, but they all share one thing in common – a passion for ballroom dance. “It’s been a wonderful experience,” says Cynthia Garcia, 27. Garcia has been dancing for two and a half years and still continues to dance along with her younger sister Alyssa Garcia. It was her younger sister says Garcia who introduced her to the ballroom dance. 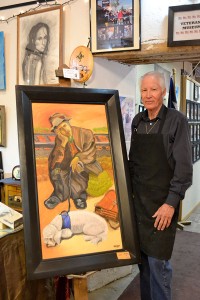 SAN ELISARIO, TX – Tales of a bygone Spanish colonial era and the gun slinging Wild West echo inside the ancient adobe walls of buildings in this small town half-an-hour drive east of El Paso. Outside one of the ancient structures, now an art gallery, Manuel Alvarado, a tall, slender man happily greets curious visitors. “The reason I like San Eli is because it’s calm, not so hectic like a bigger city,” said Alvarado. San Elizario, or San Eli as it is known to locals, has undergone a change. With the help of local artist Al Borrego, San Elizario has established itself as an art district. 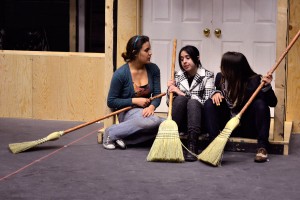 Electra is a vieja from ancient Greece, suffering like a Chicana in East LA

EL PASO – Las vecinas walk in, brooms in hand, gossiping about neighborhood happenings like a scene straight out of a novela, only this time the situation comes not from television but from ancient Greek drama. This rendition of the Greek classic tragedy Electra, opened at the Theatre and Dance Department at the University of Texas at El Paso March 13 for a four-day run with a twist. According to director Rebecca Rivas, playwright Luis Alfaro used the Greek tragedy as a skeleton for Electricidad, his Chicano rendition of the classic, by placing it in an East L.A. barrio and infusing Chicano culture into his work. “He allows our culture to bleed in,” said Rivas, “and it forms it’s own really funny and heartbreaking play.”

The plot of Electricidad is the same as its ancient counterpart. The themes of revenge and family are there, but there are a few differences. 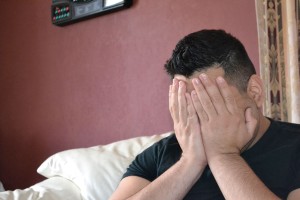 EL PASO – Sitting on the couch, a shy look on his face, he looks at his boyfriend working on a laptop. Almost as if sensing his anxiety the boyfriend flashes a reassuring smile. He responds back with a smile, takes a deep breath, his shy demeanor replaced with confidence. “I have had people tell me that I was going to burn in hell,” said Daniel Falcon, 22, “that I should reconsider my sexuality.”  Falcon, a recent nursing grad, speaks of the stigma and criticism of being gay that he faces in his everyday life. “It has happened to me a couple of times that if I’m holding my partner’s hand [people] have something to say to me,” said Falcon. 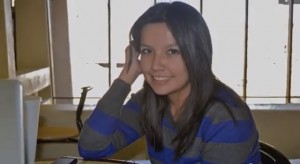 EL PASO — Like many 18-year-olds, Vanessa Hernandez is going to college, but unlike most students sitting in the lecture hall she has been diagnosed with a chronic and disabling disease – Multiple Sclerosis (MS). “I was diagnosed with MS when I was nine years old,” said Hernandez, who is studying to become a nurse. “January 5, 2005 is the exact date.”

Multiple Sclerosis attacks the central nervous system, according to the National Multiple Sclerosis Society. The caused is believed to be an abnormal response of the body’s immune system along with environmental, genetic, and bacterial or viral factors. Though Hernandez looks like a normal college student MS does affect her studies.

No, my papa is not Korean!

El Paso – I would be lying if I said I was a suave city girl. The truth is downtown still scares me. With all the shady characters walking up and down the streets and the shopkeepers peering at you with their hawk like eyes, downtown is not my vision of a shopper’s paradise. What I loathe most is that some stores require customers to leave their shopping bags at the front counter. Because I can’t be sure that my bag will be returned simply because my name is taped to it, when I leave something at the counter naturally I am apprehensive.