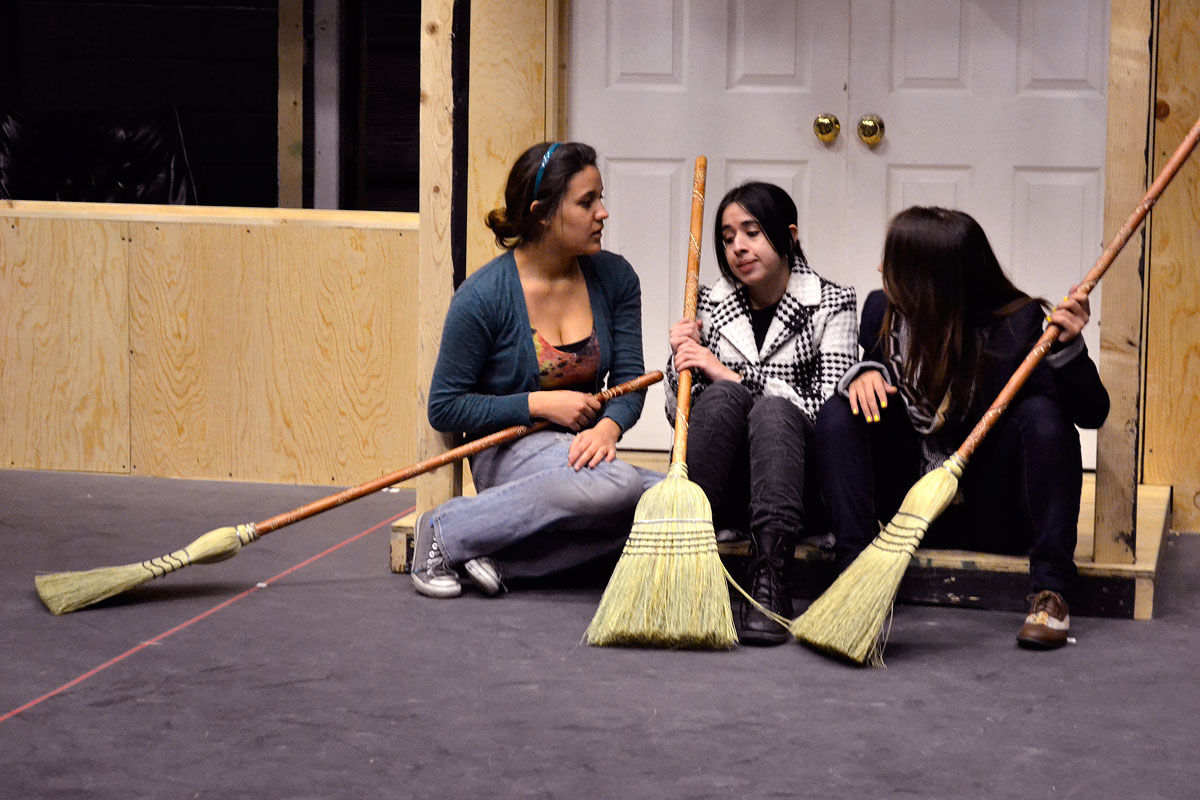 EL PASO – Las vecinas walk in, brooms in hand, gossiping about neighborhood happenings like a scene straight out of a novela, only this time the situation comes not from television but from ancient Greek drama.

This rendition of the Greek classic tragedy Electra, opened at the Theatre and Dance Department at the University of Texas at El Paso March 13 for a four-day run with a twist. According to director Rebecca Rivas, playwright Luis Alfaro used the Greek tragedy as a skeleton for Electricidad, his Chicano rendition of the classic, by placing it in an East L.A. barrio and infusing Chicano culture into his work.

“He allows our culture to bleed in,” said Rivas, “and it forms it’s own really funny and heartbreaking play.”

The plot of Electricidad is the same as its ancient counterpart. The themes of revenge and family are there, but there are a few differences. According to Rivas, Alfaro has taken his own approach to how Electra, or as she is known in the play Electricidad, recognizes her brother Orestes. However the most prominent difference is Alfaro’s use of the Chicano culture.

“He has a really good use of our language, meaning the Spanish, the Spanglish, and the English and he uses it to make poetry happen,” said Rivas. The cast from Electricidad by Luis Alfaro, at a recent rehearsal. (Kimberly Garcia/Borderzine.com)

The language is a prominent feature in the play used by the characters that are members of the Eastside Locos gang. The characters use words such as mamá, vieja, abuela, pendeja, transitioning from Spanish to English smoothly while sometimes mixing the two creating Spanglish, a language that is all to familiar to El Paso. “The fact that we know Spanish is very helpful because it is our culture and we have to embrace it,” said Paloma Pelayo, who plays one of the three vecinas.

Along with the use of language, the Chicano culture is represented by other symbols such as the statuette of the Virgin of Guadalupe that can be seen on the set, a cultural staple that can be recognized in most Chicano households. But one of the most prominent ways in which the playwright infuses the Chicano culture into the drama is through the characters. Electricidad, or as she is called La Trici, is chola and her father was the King of the Eastside Locos. Las vecinas are another unique set of characters that represent the Chicano culture all familiar to people in El Paso.

“They’re in this form of three women who act as the Greek chorus,” said Rivas of Las vecinas, “who remind me of my aunt.”

Lluvia Almanza, Andrea De Anda, and Paloma Pelayo, who play Las vecinas all agree that the characters they play are reminiscent of their aunts. “We take a lot of inspiration form the aunts we have” said Pelayo. “Pretty much from the older generations,” added De Anda, “they still have those values.”

Relatives were not the only source of inspiration for the actresses. “A lot of people in the city act like characters in the play,” said Almanza. “That’s why inspiration came to us,” said Pelayo “of course we can get inspiration from the streets.”

It is the Chicano culture that has allowed the cast and crew to connect with the play on a personal level. They grew up in El Paso, which has given them an understanding of the culture manifested in the production of “Electricidad”.

“I do think as El Pasoans we celebrate our culture and we hang on to it,” said Rivas, “because we’re children of this city. There’s a real passion from the designers and the actors to do justice to these people [characters].”

The Chicano culture prevalent in both the play and city is an opportunity for the audience to connect with the play just like the cast and crew did. “We don’t usually put on Chicano plays here,” said Almanza, “and we do live in a Chicano city. This [culture] is a big part of our city.”

“They [audience] will feel a connection to the story,” added De Anda.

The audience does not have to be Chicano nor familiar with the culture to enjoy the production of Electricidad but as Rivas explains, there are certain aspects of the play that will ring familiar and relatable to Chicanos.

“You don’t have to be Chicano, Latino to appreciate [the play],” said Rivas “but for me it’s a play about revenge but it’s also a play about loyalty and I think that’s something in our culture that runs super deep, and for that reason I think the [audiences’] hearts are bound to align with the characters.”