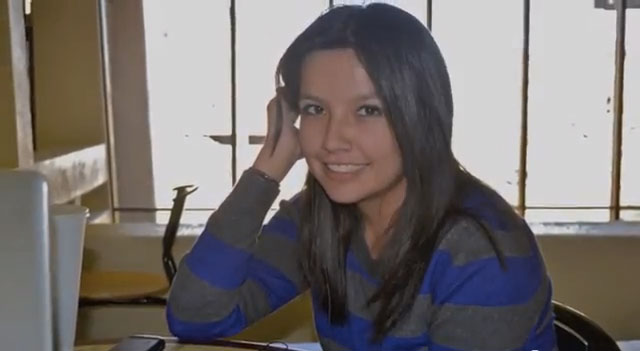 Vanessa Hernandez is decided not to let MS control her life. (Kimberly García/Borderzine.com)

EL PASO — Like many 18-year-olds, Vanessa Hernandez is going to college, but unlike most students sitting in the lecture hall she has been diagnosed with a chronic and disabling disease – Multiple Sclerosis (MS).

“I was diagnosed with MS when I was nine years old,” said Hernandez, who is studying to become a nurse. “January 5, 2005 is the exact date.”

Multiple Sclerosis attacks the central nervous system, according to the National Multiple Sclerosis Society. The caused is believed to be an abnormal response of the body’s immune system along with environmental, genetic, and bacterial or viral factors. Vanessa Hernandez is decided not to let MS control her life. (Kimberly García/Borderzine.com)

Though Hernandez looks like a normal college student MS does affect her studies. “College is harder for me because I can’t remember a lot of important things,” said Hernandez. “I can try as hard as I want, but because of my MS it’s difficult.”

Hernandez’ daily routine includes two doses of medication, which consist of injections to her stomach. “It hurts,” she said, “but I have to take it.”

The National Multiple Sclerosis Society identified the city of El Paso as a cluster of MS. The society defines a cluster as an area in which a high number of cases have been identified over a specific period of time.

In 1994 a study done by the Environmental and Injury Epidemiology and Toxicology Unit from the Texas Department of State Health Services, linked 14 definite cases of MS in El Paso to the Kern Place-Mission Hills area. Another study done by TDSHS between the years 1998-2003 identified 336 cases of MS during a 5-year period in a single county of El Paso. In comparison, the same study identified a total of 304 cases in 19 counties near the Lubbock area. Despite the nationally recognized cluster and prevalence of MS in El Paso, a chapter of the National Multiple Sclerosis does not exist in the city. The closest chapter that El Pasoans have access to is the Rio Grande Office located in Albuquerque, New Mexico.

“The Texas or South Central/Lone Star Chapter of the NMSS does have several offices in Texas, but none in El Paso as of yet,” said Cyndi Rikert, information and referral specialist for the National Multiple Sclerosis Society.

While there are no immediate plans to build a chapter in El Paso, the Society still has a presence here. “Through dedicated staff support in our regional offices we engage volunteers from the community to partner with us and lead our awareness and fundraising efforts. One example of this is our Walk MS: El Paso event,” said Elaine Liserio, vice president of programs & services for the National Multiple Sclerosis Society. The Walk MS: El Paso event is held annually at Ascarate Park and plays a critical role in helping to provide services and support for those affected with MS in the city. According to Liserio, the walk has been successful due to the volunteer efforts from members of the community.

“Funds raised by Walk MS participants support MS research and programs and services that directly impact those living with MS such as the Self-Help Group in El Paso,” Liserio said.

Because there is no local chapter the self-help groups are a main source of support for people living with MS in El Paso. The groups, which meet the second Wednesday of each month at the El Paso Cancer Treatment Center at various times are free to individual diagnosed with MS and their families. Trained volunteers who have personal experiences with MS facilitate the groups. Along with the support, the self-help groups also provide a setting to share experiences and make new friends.

“We recognize that El Paso and its surrounding communities can benefit from additional resources that can impact the lives of those affected by the disease,” Liserio said.

The MS Association of El Paso was started in the 1970’s and officially registered as a 501(c) non-profit organization in 1985. The number of members in the association fluctuates between 200 and 90 members including people diagnosed with MS and their family because some people move and leave the city.

Although both the society and association work together for the similar cause of raising awareness there is a difference between the two.

“The society mainly focuses on research, we offer support. We always are open to people who are newly diagnosed so that they can talk to people, people who understand,” said Michael Burris who is the treasurer of the association and is living with MS.

One of the main resources provided by the association is a group meeting that takes place every third of the month where people whose lives have been affected by MS can come together, share stories and experiences and most importantly become part of a network of people who provide both support and understanding.

Along with the meetings the association also offers opportunities for the remodeling of homes to accommodate those with MS, and offers equipment such as ramps for wheelchairs. “We just got a warehouse to store our equipment in the Northeast,” said Palacios who has also been diagnosed with MS.

Like the national Society the Association also holds a Walk event to raise money, support and awareness for both the Association and those living with MS. The next walk will take place during the first Saturday of October.

“In order for me to be successful I have to be happy all the time,” said Heidi Orozco the Social Coordinator for the association, “I realized that I wasn’t alone, that’s what I learned from the Association.”

Orozco was diagnosed with MS at the age of 24. At the time of her diagnoses she was paralyzed from the neck down. Through treatment, chemotherapy, and medication Orozco has been able to regain control of her body and is now going back to school in hopes of becoming a social worker to help people with MS.

“I would like young people to join the group,” said Orozco, “the first thing you see in the Internet is MS affects people age 40 and older, but that’s not true.”

Like Hernandez and Orozco, there are case of MS in people younger than 40. A study done in 2007 showed that two to five percent of people with MS were diagnosed before age 16. Studies have also shown an increase prevalence of MS in young children.

“The city is not aware of MS,” said Orozco, “there are not enough resources for people with MS.”

Palacios suggests that a chapter of the national society could help raise community awareness of MS and benefit the Association as well. “We could receive more recognition if there was a chapter of the society in town,” said Palacios, “We could benefit by receiving more support. Our walk could be more successful.”

Through the dedicated efforts of volunteers such as Burris, Palacios, and Orozco, the association has been able to function since it’s establishment. One of their long-term goals is to acquire a stable office place to operate from. Currently the Association operates from the volunteers’ homes and the meetings take place in local restaurants.

“If we had an office people could meet and walk in and get information, a place where we can teach and get together and help each other,” Orozco said.

Despite the lack of awareness and personal hardships of living with MS all three association officers maintain a positive attitude. “I think were doing good,” said Palacios, “the organization is doing good and I’m proud with what we accomplished.”

“You got to be positive and happy,” said Burris “It keeps you from having an attack.”

“We have to be positive,” Orozco added, “talk to your doctor, try another medicine, live your life and enjoy it, and go as far as you can.”

Just like the association officers, Hernandez remains optimistic. She has adjusted her lifestyle to accommodate her illness, but she thinks that the community also needs to become aware and accommodate to the needs of people living with MS.

“I do think that having a chapter of the Society in town would help, especially for my family they can learn how to treat me,” Hernandez said.

For more information on MS and resources available through the National Multiple Sclerosis Society call 1-800-344-4867 or visit the society online at http://www.nationalmssociety.org/chapters/txh/programs-services/index.aspx

For more information on MS and volunteer opportunities through the MS Association of El Paso contact Michael Burris at 915-592-3191 or online at yahoogroups.com.msaep