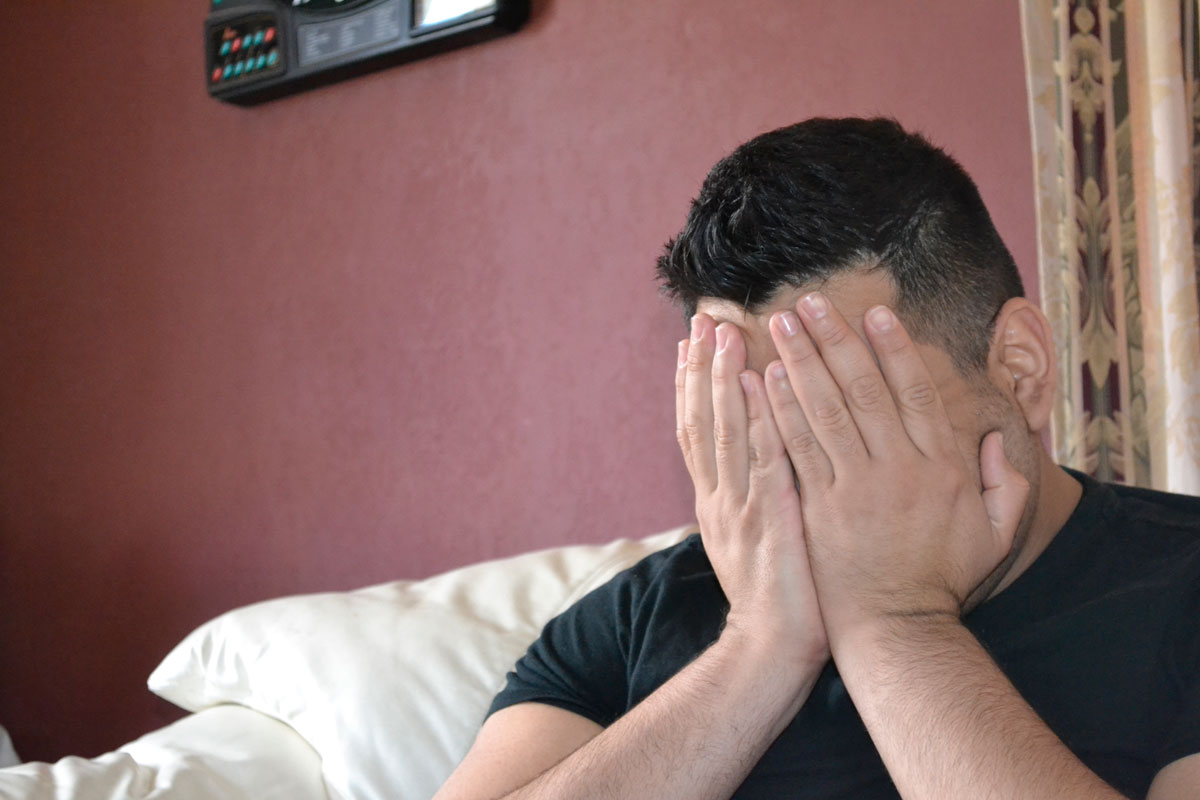 "Since I grew up in a really strict Christian family, it was hard to express myself", said Daniel Falcon. (Kimberly Garcia/Borderzine.com)

EL PASO – Sitting on the couch, a shy look on his face, he looks at his boyfriend working on a laptop. Almost as if sensing his anxiety the boyfriend flashes a reassuring smile. He responds back with a smile, takes a deep breath, his shy demeanor replaced with confidence.

“I have had people tell me that I was going to burn in hell,” said Daniel Falcon, 22, “that I should reconsider my sexuality.”  Falcon, a recent nursing grad, speaks of the stigma and criticism of being gay that he faces in his everyday life.

“It has happened to me a couple of times that if I’m holding my partner’s hand [people] have something to say to me,” said Falcon. “I try my best to ignore them but sometimes I just want to yell at them.”

Along with facing disapproving attitudes Falcon has to deal with the stereotypes perpetuated by society as well and it is not unusual to have those stereotypes forced upon him. “Every gay man is a whore,” is a common stereotype, explained Falcon. “[It] is not true. There are some of us who believe in monogamy. I am currently in a monogamous relationship.” "Since I grew up in a really strict Christian family, it was hard to express myself", said Daniel Falcon. (Kimberly Garcia/Borderzine.com)

These types of experiences commonly faced by people of LGBT orientation inspired four of Falcon’s friends to create a media vehicle focused on promoting acceptance and tolerance for LGBT individuals through entertainment and news programming.

They called it the Laurent Entertainment Network (LEN).

“Our motto is: encouraging you to think differently,” said Aaron Escobar through email. Laurent was the brainchild of Escobar, Jeremiah Brewer, Victor Garcia, and Jacob Daniels. “We were sitting around a table having fun and discussing life when the idea came about,” said Brewer through email. “That’s when we came up with our LGBTS family name, the Laurent’s,” adds Escobar.

The name Laurent is representative of the creators. Classy, different, unique, with a taste of old “Hollywood,” are the words that Escobar uses to describe his LGBTS family. With its French and Latin origins, the name Laurent radiated an exotic aura that appealed to them. “An uncommon name for an uncommon family with uncommon but great ideas!” said Escobar.

LEN was founded in the March of 2012 in El Paso, Texas. Escobar, an El Pasoan currently residing in the Los Angeles area, said that his experiences growing up here were influential in the creation of LEN.

“Growing up and knowing that being anything other than normal and straight was unacceptable [made] it hard to be true to myself and who I was. In school you were encouraged to be different, be yourself and all that jazz, but there was always somehow this underlying double standard. In a sense I was lost and confused,” said Escobar, “So, growing up, feeling confused and alone is what has really helped create the backbone of Laurent Entertainment Network.”

It is this type of life experience that has been essential in LEN’s mission to promote tolerance and acceptance throughout society.

LEN is currently a non-profit organization that offers original programming such as OnAir with JakeRyan and Freshly Fierce hosted by Jay Rizzles, both of which are podcasts. Topics discussed include, music of various genres, information on various self-help groups, deep personal conversations, along with world and local news.

“Both programs promote acceptance and tolerance, and encourage our listeners/fans to do the same” said Escobar.

“We also follow issues concerning the GLBTS community” adds Brewer,  “As members of this community I feel it’s our duty to share with our viewers what’s going on whether it’s good or bad. Change.org is something both Aaron and I both promote.”

While most of LEN’s programming is offered in podcast form it is the hopes of Escobar that LEN will soon be able to branch out to other social media platforms, specifically YouTube.

“We hope to start using YouTube to create a talk show where we can place ourselves in front of a camera and be seen,” said Escobar. “[By] creating a talk show specifically aimed towards promoting acceptance, tolerance, equality, and engaging people who listen, whether they are for or against our cause, gives us an opportunity to try and open up their minds to what they may not understand or maybe clear up some confusion.” By using YouTube, Escobar hopes to create a platform in which Laurent can connect to people on personal level. Escobar plans to use YouTube as a place where they can be accessible.

“By making our own stories heard, and making ourselves vulnerable, relatable, and accessible, we’ve then created a platform for people who can come to us, whether they need or want advice, want to be heard, want to share their experiences, or whatever it is they may gain from our cause.”

While it is too soon to see if LEN has made an impact on society, it is still a young, growing media vehicle that has room to grow and expand. LEN’s founders hope to not only continue with its podcasts and venture into YouTube but also hope to venture into the entertainment, restaurants, and lounge industries.

“We want to be a sort of Oprah and Ellen DeGeneres,” said Escobar, “[have] a funny and entertaining side, yet serious and emotional and all at the same time giving.”

Brewer, who is currently in Asia, also plans to make a local impact with LEN. “LEN is always looking at great ways to give back to our community whether it be though donation or charity work,” said Brewer. “The AIDS center in El Paso will be the first place on my list.”

Plans to give back to the community include working with the El Paso community by featuring LEN at local venues and doing podcasts in LGBT dominant areas. LEN also wants to support local businesses and artists by featuring them in podcasts.  While the future seems hopeful for LEN, they still want to make a present day impact.

Currently LEN is owned and operated by three persons including Escobar and Brewer. The dynamic of these three individuals is what allows LEN to take on a unique perspective on issues.

“The difference we all have becomes a source of greater knowledge when approaching different topics,” said Brewer “I may be more comfortable in just coming out and saying what’s on my mind about a certain topic whereas another Laurent would rather approach the situation in a more serious and low keyed manner.”

It is this individualist style that makes LEN an ever evolving, ever changing company providing not just a single point of view but rather a dynamic perspective. It allows them to grow and learn from each other by playing on each other differences.

LEN is made up of a “unit of independent collaborators” as Brewer explains. “We each pick topics and concerns and seek each other’s insight and help on the issue. At the end of the day we are all on the same level. The difference is what makes people so great.”

LEN’s uniqueness not only comes from their group dynamics but from their target audience as well.  LEN not only caters to LGBT but to straight people as well.

“We include our straight allies as well,” said Escobar, “so we have decided to use the better acronym LGBTS.” In LEN’s case the letter ‘S’ is representative of the straight allies.

“We want to be good role models for the male side of the LGBTS community as well,” Escobar said, “There are plenty of females, and often times gay males are construed to be promiscuous and typically flamboyant, and while we may sometimes exhibit some stereotypical traits, we are very much different from the stereotype. And that’s something that we want to use in our favor as well.”

LEN’s goals of challenging stereotypes, becoming a voice for the LGBTS community, and most importantly becoming a vehicle for change is imbedded in their mission. To succeed LEN finds it necessary to the tools for change.

LEN’s goal of creating change is exactly what Falcon wants to see in the future as well.

“I really want people to be more accepting,” he said, “to realize that we are human beings, that love is love.”

“We want it to be known and stated that the Laurent’s and LEN are here to help change the world, and are here for anyone out there wanting advice or guidance, and that we promote tolerance and acceptance,” said Escobar, “If we can all unite, we can all help each other grow and learn and thrive in a world of indifference towards LGBTS people and supporters and change the world one person at a time.”