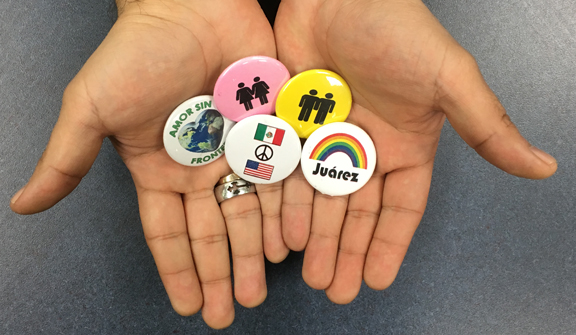 One El Pasoan who is super excited by Pope Francis’ visit this week to Juarez, is 19-year-old UTEP student Gilbert Lopez, a practicing Catholic who is gay. He credits this pope and his compassionate words and attitude toward homosexuals for motivating him to come out as a gay teenager.

“When I was not accepting of my sexuality, when I would come in contact with homosexuals, it was either you’re religious or you’re not,” said Lopez, who considers himself a devout Catholic and is a member of his church choir.

“A lot of times people who are homosexual aren’t religious because of the way people talk about it. They get discouraged,” he said.

Lopez attributes his decision to come out as gay in front of his church youth group in June of last year to the support of his fellow church members and parish leaders.as well as Pope Francis’ well-publicized “Who am I to judge?” position on gays in the church.

In response to a reporter’s question on his return home to Rome from Rio de Janiero in 2013, the Argentinian-born pope said: “If they accept the Lord and have goodwill, who am I to judge them? They shouldn’t be marginalized. The tendency is not the problem … they’re our brothers.”

Although Catholic church doctrine condemns the practice of homosexuality, Lopez said he is optimistic the church may one day become more accepting of the LGBT community as a result of this pope’s now famous progressive statements.

A 2015 Pew Research study suggests that there are fewer Catholics in the United States every year, with millennials choosing to stop practicing the religion. The study shows that there are 51 million Catholic adults in the U.S. today, or about 3 million fewer than in 2007. More research released by Pew in September shows that half of U.S. adults who were raised Catholic have left the church at some point.

Benjamin Alire Sáenz, 61, an award-winning author and creative writing professor at UT El Paso considers himself Catholic but, unlike Lopez, he has reservations about the Catholic faith.

“I think I have been in a dialogue with the Catholic church all of my life and sometimes that dialogue is in fact an argument,” said Saenz, who is gay and was once a priest for a short time before becoming a novelist, poet and writer of books for children and young adults.

His book “Everything Begins & Ends at the Kentucky Club,” a collection of short stories that span both sides of the border won the prestigious PEN/Faulkner award in 2013. His young-adult novel, “Aristotle and Dante Discover the Secrets of the Universe,” earned numerous awards and critical acclaim. Publisher’s Weekly praised it as “a tender, honest exploration of identity and sexuality, and a passionate reminder that love—whether romantic or familial—should be open, free, and without shame.”

Saenz said he’s noticed a generational trend among young people to just leave the Catholic church in conflict over their sexuality.

Lopez says he too has witnessed many people his age leaving the Catholic faith because of the church’s intransigent positions on many social issues, including homosexuality.

“A lot of homosexuals get discouraged and it is really sad how they turn against God and against religion because of how rough people can act,” Lopez said.

Sáenz said despite his complicated feelings as a Catholic gay man living on the U.S. Mexico border, he is as excited as many other Borderland residents over Pope Francis’ visit to Ciudad Juarez.

“There is much more to me than me being gay,” Saenz said. “I’m a person, I’m a man and I love the border, you know, and I love that he is coming here.”

Sáenz said he admires the current pope’s progressive attitude toward gays and other social justice issues.

Pope Francis “represents Catholicism, but in all of its diversity,” Sáenz said. “He doesn’t condemn people just for being gay, so that certainly makes me feel like at least he is thinking about us. He is not just dismissing gay people and I think that says a lot.”

A push for greater inclusiveness by U.S. Catholics makes Lopez feel hopeful about the future. Like many other local Catholics, he plans to be a part of the papal festivities either by going to the Sun Bowl or watching the papal Mass on television.

Sáenz will also be taking part in pope-related activities as a Catholic and as a writer. He will be at the river levy by the Border Highway on Wednesday afternoon taking in the surroundings and hoping to catch a glimpse of the pope.

Amanda Guillen is a multimedia journalism major at the University of Texas at El Paso minoring in women’s studies. She is editor of UTEP's campus newspaper, The Prospector. She has also worked as a reporter for Minero Magazine, a monthly bilingual publication at UTEP, She has completed internships with KVIA Channel 7 in El Paso and the Scripps Howard Foundation Wire in Washington, D.C.,