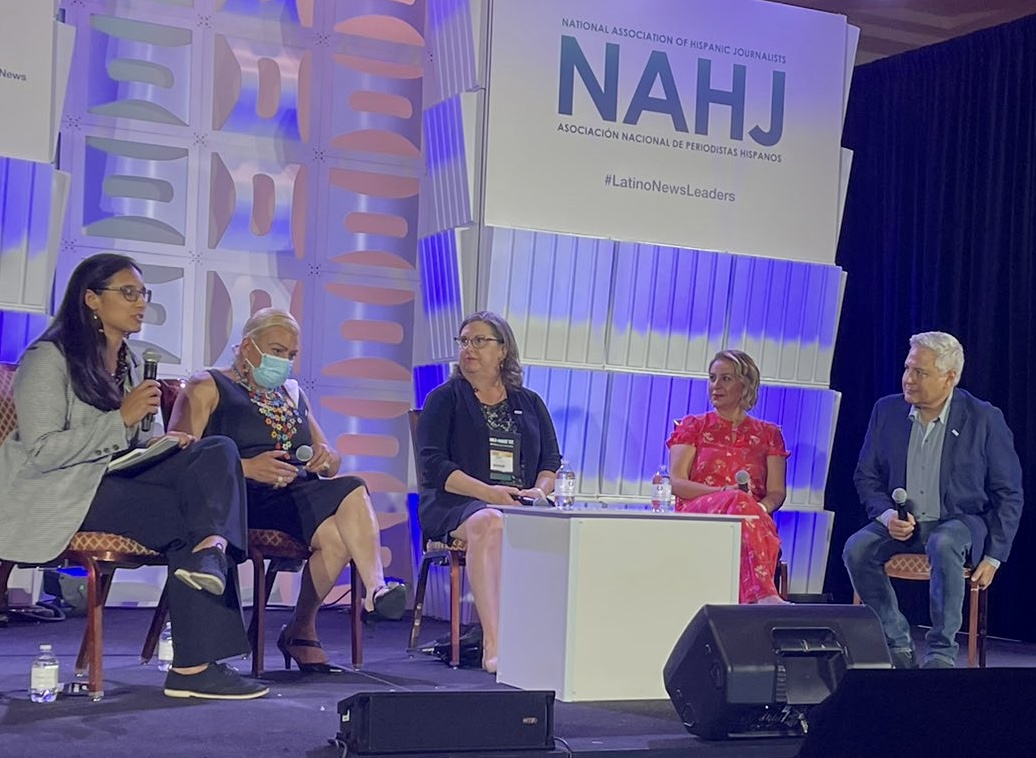 NAHJ panel on Reclaiming the Border Narrative at the national conference in August 2022. From left, moderator Arelis R. Hernández of the Washington Post, Bamby Salcedo of the Trans List, Kate Gannon of Borderzine, Maritza Félix of Conecta Arizona and author David Damian Figueroa.

As we celebrate homecoming season in Texas, here’s a look at some highlights for Borderzine alumni, students and supporters in the journalism industry.

Borderzine director Kate Gannon discussed the special series, Borderland Life Amid the Pandemic, as part of a panel of partner organizations that participated in NAHJ’s project on Reclaiming the Border Narrative: Storytelling and Cultural Power for Migrant Justice. 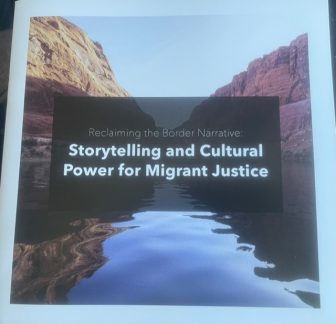 Borderzine was among 12 organizations to receive grants from NAHJ funded by the Ford Foundation  Reclaiming the Border Narrative project. The project is an effort “to organize and preserve stories reflecting the dignity and truth of border communities, connecting and empowering them to center their own narrative on their terms and in their voices.”

The El Paso-Juárez region faced unique challenges in the COVID-19 pandemic. Thousands of people lost their lives; hundreds of thousands had their lives massively disrupted. The cross-border flow of people was largely shut off for 18 months, keeping family members from loved ones on the other side of the Rio Grande.

UTEP students on the staff of Borderzine chronicled and curated the stories and genuine experiences of people in the Borderland during this unprecedented time. Now, we are working with archivists commissioned by NAHJ to include our project in the Reclaiming the Border Narrative project archive at the University of Arizona.

Angela Kocherga, news director for KTEP and Borderzine, was recognized with the prestigious national Edward R. Murrow Award in Hard News for her story Migrants Expelled.

Running into UTEP grads at the 2022 NABJ-NAHJ conference 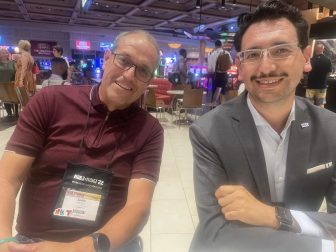 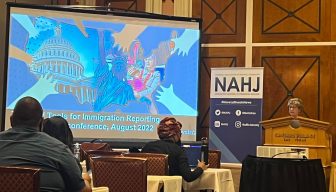 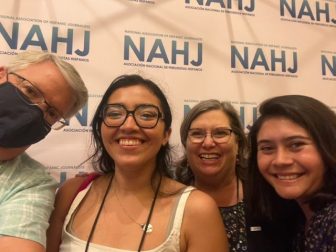 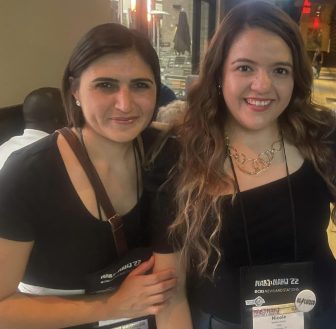 Perla Trevizo, left, with ProPublica-Texas Tribune Investigative Initiative hanging out with Nicole Chavez, CNN’s breaking and trends writer on race and equality. Trevizo is a UT Austin graduate, but originally from Juarez / El Paso and is a great ally for Borderzine and border journalists. Chavez is a proud UTEP journalism grad.

Congratulations to to UTEP MMJ student Ariel Castillo for being selected to participate in NPR’s Next Generation Radio Texas project in September.

Castillo’s report shows us how San Elizario’s agriculture manager is trying to encourage residents to grow their own food using new techniques and one surprising desert-friendly plant.

2022 summer internships thanks to your support

Thanks to money raised during our annual end-of-year fundraising campaign, the Borderzine fund was able to help support three student summer internships for experience in professional newsrooms. The journalism program’s Annette Rainville scholarship was also awarded. Here are the four interns and where they worked:

Inlandia Institute announced the winner of its inaugural Eliud Martínez Prize to Zita Arocha for Guajira – the Cuba girl, a memoir. This annual prize is awarded to a first book author in fiction or creative nonfiction who identifies as Hispanic, Latino/a/x, or Chicana/o/x. Publication by Inlandia Books is set for 2024.

Arocha is a Cuban-American journalist, writer and educator who has reported on immigration and Latino issues for The Washington Post, Miami Herald and two afternoon dailies. She taught bilingual journalism for nearly 20 years at the University of Texas El Paso where she founded and directed the award-winning web magazine Borderzine about border issues and culture. See Award Story here.