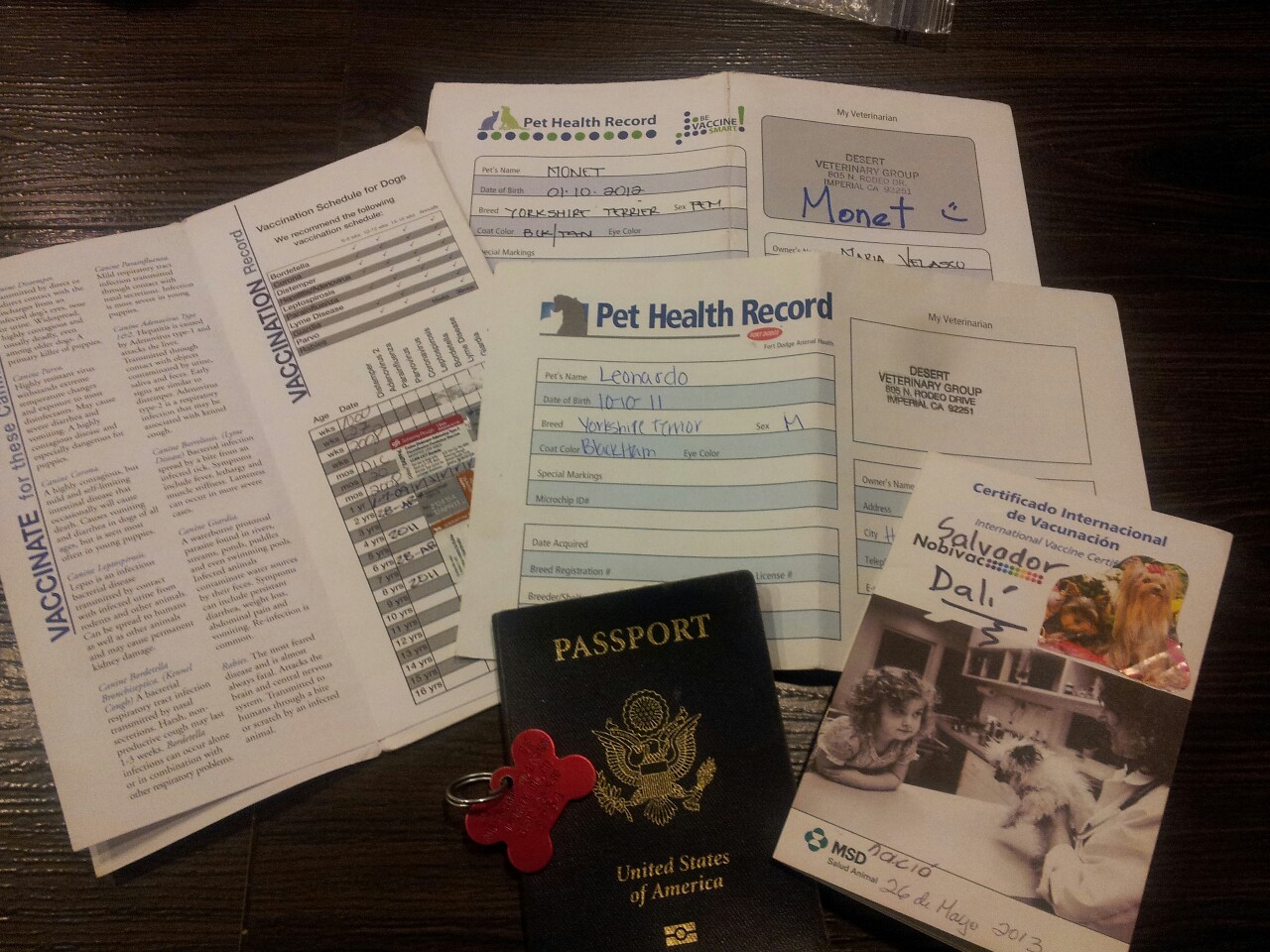 Elva Lomas rounds up five of her seven dogs at her home in Calexico, Calif. in Nov. 2013. Lomas says frequent veterinary trips across the border into Mexicali are worth the hassle in savings. –Photo by Marian Ruiz

For Elva Lomas, that is what a typical veterinary visit consists of.

“Going over [to Mexico] isn’t even hard for me,” Lomas said.  “Having a SENTRI pass, I can take and bring my dogs really easily, and since I have all these dogs it’s just cheap and easy for me.”

Lomas has been traveling to and from Mexicali for years—by car and on foot—to have her beloved dogs cared for by Mexican veterinarians who charge far less for the same services and medicines than their American counterparts do.  She is among a new crowd of Americans looking for lower-cost health care, not for themselves, but for their four-legged companions.

“Medical tourism” in Mexicali typically comprises physician care as minor as root canals and as major as plastic surgery, the pursuit of less expensive pharmaceutical goods, and even veterinary care.  Mexicali Mayor Francisco Perez Tejada said more than 150,000 U.S. visitors in 2010 generated more than $16 million for the local border economy.

For people like Lomas, a trip across the border is a small sacrifice for an affordable price.

Lomas pays about $50 dollars a month on dog food alone.  Adding required annual shots, initial spaying and neutering, and any emergency care and medication her dogs might need could drift expenses into the four-digit range every year on this side of the border. So, she says her trips to Mexicali become more and more worthwhile, albeit cumbersome. Displayed are just some of Lomas’ dogs’ shot records as well as her own passport, and all the things she needs to cross from the U.S. to Mexicali and back. She says that she’s used to the tedious trips, but so are her dogs. –Photo by Marian Ruiz

“People always stare at you,” Lomas said.  “I’m sure I look ridiculous when I have a dog in one arm and the crate in another.  But I chose to have all these dogs and I have to take care of them.”

Spay and neuter services—some of the most-performed surgeries on pets on both sides of the border—can run as low as 200 pesos, or about $15 in Mexicali. The average fee for the same spay/neuter procedure in the U.S. is $80.  Basic annual booster shots are as low as 100 pesos, and medications bought in Mexicali are significantly less than anything offered in the U.S., just a border fence away.

The stigma that Mexican physicians—for humans or animals—are less qualified than American doctors, and accountancy is nil in Mexico, is becoming less of a barrier for providers south of the border, and for skittish clients north of the border.  Yazmin Valdez, a veterinarian for Estetica Y Clinica Canina in Mexicali said her clientele reflects that.

“I think that my peers here in Mexico are just as equally qualified,” said Valdez, ”and even if our services happen to be more inexpensive in the long run, that’s more business for us.” Buying medications for pets and livestock is usually limited to the attending vet in the U.S., or high-priced pharmacies. In Mexico, however, entire stores, like this one, are dedicated to selling veterinary medicines. --Photo by Marian Ruiz

With only three veterinary clinics in the neighboring California region of the Imperial Valley, the dozens of options and literally personal services—house calls included—offered in Mexicali are added incentives for packing up pets and moving them back and forth across the border.

“I get a lot of patients from the other side of the fence, and they just set appointments and I come to the office,” said Eduardo Jauregi, the owner veterinarian at the Veterinaria Jauregui in Mexicali.

“Sometimes they don’t even have to make an appointment and I can easily see them,” Jauregui said, “but in an emergency, they can just call my cell-phone and there’s three options: I can go back to the office, I can visit their house, or they can come to my house.”

And as easy as that might sound, there are also reasonable concerns about leaving the U.S. and returning home without hassle, especially with several pets in tow.

“Here in the two Calexico ports of entry, if you just show the shot record you can just cross your dogs,” Niebla said.  “We have a dog too, and we just checked her into Angel De La Mascota in Mexicali, and  we just crossed her using her shot record.”

A certificate of rabies vaccination obtained within 12 months of your trip to Mexico, but no less than 30 days prior to re-entry into the U.S., is required upon re-entry to the U.S., or the pet might have to go through a health examination.

According to the Imperial County Health Department Deputy Director for Community Health Danila Vargas, “As long as you have the rabies tag or the vaccination record for your dog, it should be valid, whether it’s from here or another country.”

Born in San Diego, grew up in Calexico, and somehow ended up in Heber. A 20-year-old Imperial Valley College student trying to find her way in journalism, and break through to the fashion world. For now she continues to try to transfer to SDSU and watches Project Runway religiously.