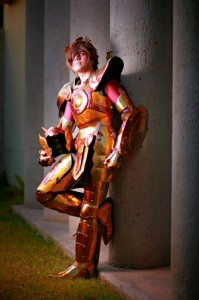 Edgar Mayoral of El Centro, Calif. cosplays at the 2010 San Diego Comic-Con International as Libra Dohko, a character from the Knights of the Zodiac.

MEXICALI, Mexico–When the sun rises Edgar Mayoral’s hammer strikes the iron on the anvil, creating an ear-piercing clanging sound that resonates throughout the neighborhood in this border city.

The 23-year-old El Centro, Calif. resident has a talent to shape cold, lifeless sheets of iron into fantastical and vibrant wearable armor that would make you believe Mayoral has been transformed into a live-action Japanese anime character. A skill that cosplayers—short for “costume play”—and non-cosplayers alike marvel at.

“This character has a higher fan base in Mexico than in the U.S.,” says Jerry Travis, 21, an anime scholar from Brawley, Calif. and a fellow student of Mayoral’s at Imperial Valley College.

Cosplayers like Mayoral and Travis are only known among a tight group of people who have honed their skills in the fantasy worlds of anime and manga, but Mayoral’s notoriety is about to change, because he will represent the Imperial and Mexicali valleys in the 2011 San Diego Comic-Con International, an honor among local cosplayers.

Mayoral may have to turn up the heat on production since the wildly popular event begins June 21.

Enjoy the following video of Mayoral crafting his armor.

Brawley, Calif. - Clarinaluz O. Valdez is currently attending Imperial Valley College where she is applying herself towards the field of Alternative Energies and Digital Logics. However, having earned a B.S. in Multimedia Arts and Animation from The Art Institute of California - San Diego back in 2003, Valdez, enjoys videography and is very thankful for the opportunity to be a part of Borderzine. Thank You