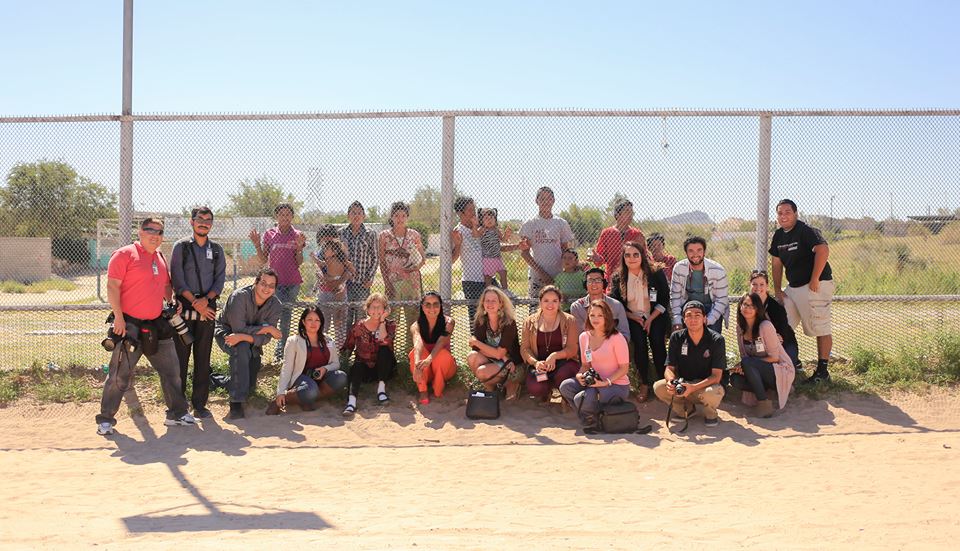 A group of SRI participants at the border wall in New Mexico. (Angel Cancino/Borderzine.com)

EL PASO – Twenty journalists from all regions of the United States gathered at the University of Texas at El Paso this fall to learn strategies and tools for reporting about immigration in their home communities. The workshop, “Reporting Immigration: From the Border to the Heartland,” was sponsored by the McCormick Foundation and Borderzine.

A group of SRI participants at the border wall in New Mexico. (Borderzine.com)

Borderzine is proud to re-publish the online, print and broadcast stories that the journalists are reporting from New York, Atlanta, Phoenix, areas of Texas and other parts of the nation.

The topics they explore include the deaths of undocumented immigrants on the Texas-Mexico border, increased scrutiny of abuses by immigration agents, growing asylum requests from Mexicans who say they are victims of persecution in their country, immigration enforcement at the El Paso-Ciudad Juarez border, and coverage by U.S. women journalists of the deaths of hundreds of girls and young women in Ciudad Juarez.

Their stories, published first in the journalists’ local news outlets, are part of the complex and ongoing story of immigration to the U.S. from Latin America and other parts of the globe.

The topics they discuss carry added urgency now as President Obama pushes forcefully for immigration reform and the U.S. Congress debates and stalls on whether the time is right for a major overhaul of the nation’s immigration laws.

Immigration is a contentious and partisan issue with opponents and proponents of reform tangling over how to balance human rights for the undocumented with increased enforcement along the nation’s borders, among other things.

Whether or not Congress enacts the reform this year, the immigration story will continue front and center as the nation grapples with the ongoing major demographic transformation of the character and complexion of who we are as Americans.

On a national and global scale, the plight of hapless millions in motion, who leave their countries of origin seeking safety or a better life, is one of the most compelling and significant stories of our time.

Through our continuing coverage of immigration matters, Borderzine is helping to tell a tale that needs telling.

Thank you for reading and responding.

High school senior Moise Damey, working out for his track team, is “in limbo” awaiting his mother’s next hearing in her bid for asylum. (David Joles/Star Tribune)

MINNEAPOLIS, MN — The realities of an immigration system under siege came walking one by one, in handcuffs and prison flip-flops, into the Bloomington courtroom of Judge William J. Nickerson.

In a windowless chamber with mismatched chairs and worn wood paneling, Nickerson, one of three U.S. Immigration Court judges in Minnesota, heard case after case of people from Mexico to Micronesia detained for violating U.S…  Read more…

Daniel Cebreros, 5, gets his Ben 10 Alien Force backpack checked by a Customs and Border Protection agent at the Columbus Port of Entry. (Robin Zielinski — Sun-News)

More than 300 young U.S. citizens living in and around Palomas, Mexico, cross into the United States each day to attend public school in southwestern New Mexico’s Luna County. The arrangement goes back to the 1950s, long before the drug war and the recent immigration debate. But decades-old problems remain. Read more…

More border agents assisting local police, Bob Ortega and Rob O’Dell, The Arizona Republic
On the afternoon of March 15, 2011, at least five Border Patrol agents and another federal agent went with Sierra Vista police officers to conduct a “knock and talk” at a house in a neighborhood where police suspected a human-smuggling operation. Read more…

Maria Puga ,on left, a widow of Anastacio Hernandez Rojas. Photo by Nick Oza /The Republic

In May of 2010, eyewitnesses shot cellphone videos that show a 42-year-old undocumented immigrant handcuffed, face-down on the ground at the San Ysidro, Calif., port of entry and surrounded by U.S. border agents. Read more…

Jose Antonio Elena Rodriguez was shot 10 times in the back and the head. Photo by Nick Oza /The Republic

A ghost is haunting Nogales.

His face stares out from shop windows. It is plastered on handbills and painted on walls under the shadow of the U.S.-Mexican border fence here. Candles and doves are stenciled onto steel posts of the fence itself in his memory, each a promise not to forget the night, 14 months ago, when teenager Jose Antonio Elena Rodriguez was shot 10 times in the back and head by one or more Border Patrol agents firing through the fence into Mexico. Read more…

In 2010, the head of the U.S. Immigration and Customs Enforcement agency told his staff to focus on deporting the most dangerous and violent undocumented immigrants. But an investigation by The Chicago Reporter found little change in the percentage of these deportations since then—nationally and in the agency’s Midwest region, which includes Chicago. Read more…