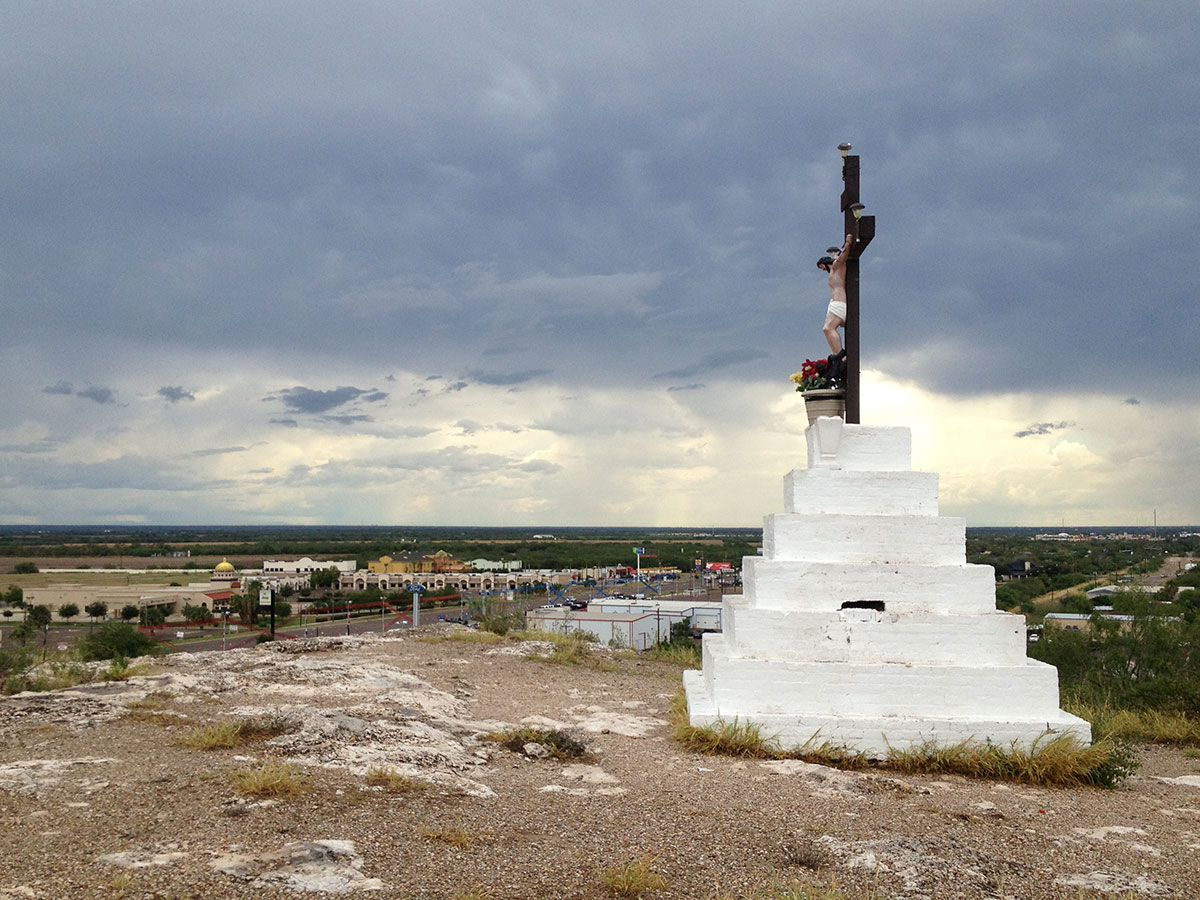 Mine and Lupita’s trip continued west into Starr County.

With only 62,000 inhabitants, Starr County is nicknamed the “Hill Country of the Rio Grande Valley.”

It’s easy to understand why.

But Starr County is more arid, hilly and rocky.

On a clear day, visitors can see the foothills of the Sierra Madre mountains in Mexico.

Starr County is one of the poorest in the United States and a smuggling corridor for drugs and illegal immigrants.

Border Patrol and other law enforcement officials are in a constant cat and mouse game along the Rio Grande and the rural roads that head north. Lupita and I once made a day trip to visit Santa Cruz, which is Spanish for “Holy Cross.”

A large monument with a crucified Jesus Christ sits atop of a hill above U.S. Highway 83 just east of Rio Grande City.

According to the Texas State Historical Association, the cross was built on a hill named Loma de la Cruz to commemorates the rain that broke a drought that reportedly had lasted from 1888 until 1894.

The hill overlooks the highway and the nearby Starr County Industrial Park.

Santa Cruz holds many surprises for visitors including a wide number of flowers, cactus, butterfly and bird species.

A grotto with images of Jesus Christ, the Virgen de Guadalupe and the narcosaint San Judas Tadeo can be found in a small cave under the monument. Heading west on Highway 83, Rio Grande City looks like any other Rio Grande Valley city with shopping centers filled with a chain restaurants, supermarkets and shops.

But the development is owed to the federal government’s Empowerment Zone program, which created infrastructure improvements and brought development.

The Rio Grande City-Camargo is located in between one of those immaculate shopping center and an adult day care center.

Built in 1966 and owned by Same Vale’s Starr Camargo Bridge Company, the bridge is one of two privately-owned bridges along the Rio Grande River.

The other privately owned bridge is Progreso International Bridge, which remains in hands of the family of the late Sam Sparks.

The Rio Grande City-Camargo International Bridge does not have as much traffic as others in the Rio Grande Valley but serves the two communities well.

The bridge is also known as the Sri Chinmoy Peace Bridge, named of the Indian-born spiritual leader.

The nickname was given in July 1991 in the middle of a “Peace Marathon,” which include a torch relay along the border and all 50 states in the United States.

During a recent day trip to the area, Lupita and I walked across the Rio Grande City-Camargo International Bridge.

Luckily, we had a ride waiting for us on the Mexican side of the bridge because the City of Camargo proper is acutally located three of four miles south of the bridge.

The ride to town gave us a chance to see souvenir shops, doctors offices, dental offices and other businesses. All of them were once teeming with American tourists but were now eerily empty.

Camargo, which makes up part of the “Frontera Chica” or “Little Border” region of Tamaulipas, was one of the worst conflict zones in the drug war.

The fight between the Gulf Cartel and the Zetas included daily gun battles, acts of arson, kidnappings and murders.

A fresh coat of paint has been put on buildings in the town’s main plaza but there are still bullet holes in the plaster of the buildings.

Driving through the town, there are still burned out homes and businesses.

Camargo used to be a sportsman’s paradise teeming with wild game and fish but now, most Americans hunters and fishermen avoid the area like the plague.

The town was hit by three dirges: the drug war, Hurricane Alex and the ongoing drought with each of them hurting business more and more.

Regardless of what happened, the people of Camargo remember the past and cling to hope that the future will be better.

It’s easy to understand why. There is much natural beauty in Camargo and the surrounding countryside. The Rio San Juan, or San Juan River, starts in the mountains of Coahuila and Nuevo Leon and meets the Rio Grande River just south of Rio Grande City.

A dam built in the 1940s a few miles south of Camargo creates the Marte R. Gomez Reservoir, which is also known as Sugar Lake.

Sugar Lake has some of the best black bass fishing the world and abundant waterfowl.

A resort built on the shore of the lake has seen better days but remains open for business to receive small numbers of visitors from both sides of the border.

Lupita and I got to see wide open spaces on the rural highways and even the foot of the dam where floodwaters from Hurricane Alex washed out a low water bridge linking Camargo with the nearby town of Comales.

Jeep tracks from Mexican army vehicles and bullet holes on a State of Tamaulipas sign served as a reminders that the drug war was also present.

Locals told us that the bridge was never rebuilt because the drug cartels didn’t want it rebuilt as a tactic to slow down army patrols.

Our Lady Of Lourdes Grotto

But our trip across the border took us west of the bridge on the Texas side and into the historic downtown district of Rio Grande City.

Built in 1762, Rio Grande City is filled with beautiful and historic brick buildings in the downtown area.

But Lupita and I took a greater interest in a replica of the Our Lady Lourdes Grotto, which was built to like the one in France.

At any given time, faithful Catholics can be found praying at the outdoor shrine.

Lupita and I found rosaries and family photos left behind by parishioners and visitors seeking divine help for their loved.

One of the photos, was an IFE card or election credential card from an elderly woman from San Fernando, Tamaulipas some 150 miles away.

We could not help but wonder if the woman had been lost in the mass graves of the drug war or one of the kidnapped aboard a passenger buses that where hijacked there in the height of the drug war in 2011.

Lupita and I continued heading west traveling through small Starr County communities named after the families that originally settled there.

We drove through communities like Los Villarreales, Los Alvarez and Escobares before arriving the historic City of Roma.

Founded in 1765, Roma was built on bluffs overlooking the Rio Grande River.

Roma was once a booming river port in the 19th Century.

Although many historic buildings in the city center have fallen into disrepair, the bluffs are now a park named the Roma Bluffs and have become a tourist destination.

Roma received an influx of new families fleeing the drug war in Mexico and is going through a building boom with new homes and businesses.

Lupita and I made a pit stop along the Rio Grande River under Roma’s two international bridges. This rural bridge linking Camargo and Comales was never rebuilt after Hurricane Alex due to drug cartel threats. (Sergio Chapa/Borderzine.com)

The original bridge linking Roma and its sister city of Miguel Aleman, Tamaulipas was a 1928 suspension bridge, which was the only one of its kind along the Rio Grande River.

A modern asphalt bridge was built but the historic suspension bridge remains standing even though it is no longer used.

Lupita and I did not get a chance to cross into Miguel Aleman but were able to see much of it from the Roma Bluffs.

Large numbers of families gather a park along the Rio Grande River.

Young people spend countless hours driving their cars in a loop along the river in what’s known as “El Roll” or the Mexican version of cruising.

What we saw was a direct contrast to the gun battles, kidnappings and mayhem of the drug war.

At the height of the drug war a neighboring city of Ciudad Mier, Tamaulipas became a ghost town overnight.

Hundreds, or some say thousands of people fled when hellish fighting between the Gulf Cartel and the Zetas literally tore the town apart in November 2010

With no water or electricity and grenade detonations and buildings on fire, many had to stay for days several days in shelters in Miguel Aleman and other cities.

The Mexican government sent thousands of troops and set up an army fort in Ciudad Mier, which was once known as a “Pueblo Magico” or “Magic Town.”

American tourists no longer visit the town in any significant numbers.