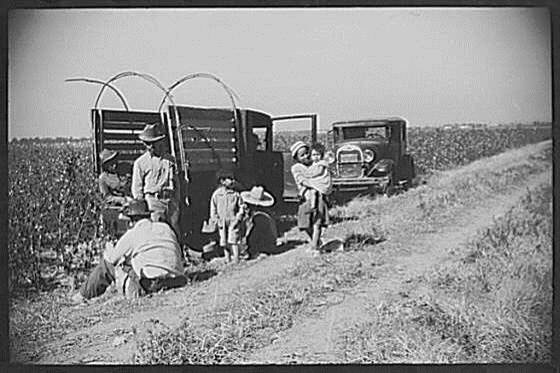 Mexican-American family parked near a cotton field in Mississippi during the 1920s. (Courtesy of Dr. Manuel Ramirez) Mexican-American family parked near a cotton field in Mississippi during the 1920s. (Courtesy of Dr. Manuel Ramirez)

EL PASO — Fresh steaming tamales are sold out of small shacks, directly from vans, and by “tamale ladies” from their homes all along the “Tamale Trail” on the good old Mississippi Delta.

“There is a tradition among some African-Americans in Mississippi, Louisiana, little dots on a map going all the way up to Chicago. They make tamales and make up this trail,” said Dr. Roberto Avant-Mier Associate Professor in the Department of Communication at the University of Texas at El Paso (UTEP), sitting in his office next to a poster of his book, Rock the Nation: Latin/o Identities and the Latin Rock Diaspora, which demonstrates how Latino music influenced early jazz music.

Avant-Mier recently discovered the Tamale Trail on a website http://www.tamaletrail.com/ where Amy Evans Streeter, oral historian at the University of Mississippi Southern Foodways Alliance, published the discussions of the Tamale Trail. She interviewed over a dozen U.S. southerners, including African-Americans, along the Mississippi delta and recorded stories about their tamale tradition.

He said it sparked his curiosity about how it came about that African-Americans in the South are making and selling tamales, a food typical of the Mexican and Latin American cuisine.

This encouraged him to fully enhance his research paper during the fall in preparation for a presentation February 11 to students, faculty and visitors. “I was like I should really develop that tamale paper… So I wrote constantly November through January trying to get it done,” he said, noting that he is considering writing and publishing an article based on his research.

Dr. Manuel Ramirez, a professor of Mexican-American history, History of the U.S.-Mexico Border and Chicano Studies at UTEP, remembers trying to convince El Pasoans that tamales are prevalent in the African American South after returning from his Ph.D. studies at the University of Mississippi.

“I would tell people back here that there were tamales stands in the Delta, and they would not believe me. So I sent them pictures from the Internet. Then they thought it was actually Mexican people who had these stands and restaurants but it was African-Americans,” says Ramirez.

Ramirez’ experience corresponds with Avant-Mier’s previous research for a book about his fascination with the blues artist Robert Johnson because of his song called “Hot Tamales.”

As he did his research, Avant-Mier wondered, “Why is an African-American man from Mississippi, a blues guy that’s famous, why is he singing about hot tamales?”

He says his book argues that this provides proof of African-Americans’ interaction with Mexicans in the South.

“African Americans and Mexicans in the South were in proximity with each other and that’s why Johnson was probably singing about hot tamales,” Avant-Mier says. In the paper he wrote for his presentation, “Hot Tamales and ‘They’re Red Hot’: Investigating Black-Mexican interactions in the U.S. South,” he mentions other blues and jazz artists as early as 1909 who sang about similar tamale themes.

A composer from Chicago named Herbert Ingraham wrote a song called, “The Hot Tamale Man,” and later other musicians in the 1920s, 40s, 50s and 60s also wrote songs about hot tamales. These songs provide proof that tamales were a popular cuisine in the U.S. South, according to Avant-Mier.

“We talk about American music history as black and white… in reality there’s a lot of Latin influence. Our culture is really a big mix of all those things,” he said.

Looking at tamales as part of Southern cuisine and blues music about tamales helped him put two and two together. He says intellectual curiosity and combining ideas from what he had researched and written about previously produced this conclusion.

He believes he’s uncovering evidence of contact between Blacks and Mexicans in the south during the late 1800s and early 1900s.

“As a Mexican-American growing up in El Paso you don’t hear stories about Mexicans in Mississippi in the 1800s and here’s evidence of this. You can say tamales are sort of evidence of this, but so are the songs,” Avant-Mier said.

Nancy Aguirre, 28, a 2012 UTEP graduate with a Ph.D. in Borderlands History, is enthusiastic about Avant-Mier’s research. “As a cultural historian it’s exciting for me to learn about the work of other scholars who are studying the impact of media and culture on ethnic communities in the U.S,” Aguirre says.

Avant-Mier believes the departure of African-Americans from Southern plantations during the Great Migration that created opportunities for Mexican migrants to work in agriculture in the South, allowed Mexicans to disseminate their food and cultural practices throughout the region.

Dr. Manuel Ramirez, a professor of Chicano studies at UTEP who also studied Southern History, said he has a photograph of a Mexican-American family parked near a cotton field in Mississippi during the 1920s.

“This is an example of Mexicans in the Mississippi Delta,” Ramirez said.  “You can’t make out the license plate but it’s a license plate from Texas so I would imagine these individuals were from South Texas following the harvest trail up to Mississippi.” Ramirez said the reason for this is mainly due to the Great Migration of African-Americans from the South to the North that left empty labor spots for other workers to fill.

Ramirez said the Mexican presence in the South is a rarely discussed aspect of Mexican-American history that should be investigated more.

“Most of the history of Mexican-Americans has focused on those living in the Southwestern part of the United States. With some exceptions, as far as Mexican-American history in the South, I think it is often neglected and is hardly researched,” he says.

This part of history is intriguing because many are unaware of it. The idea of Mexicans in the South in the 1800s is unfamiliar to most. The idea of Blacks and Mexicans intermingling and perhaps connecting with and influencing each other through music and food is largely ignored.

“Sharing music, sharing culture, and sharing food. That’s a cool story so why don’t we hear about that? All we hear is sort of about the tensions and the problems but there’s evidence of cultural interaction going back 100 years,” said Avant-Mier.

He says that in both cultures there is occasionally tension due to dissimilarities, but the recent discoveries of evidence of Black and Mexican interaction in the South can help relieve this strain.

His research thus far has opened up other areas of inquiry.

“They borrowed a cultural tradition, I’m guessing. And then the question becomes what did we get from African-Americans?” Avant-Mier asks. “If they’re getting our tamales we were interacting which means we must’ve gotten something from them as well. And I don’t know what the answer is but that opens up questions.”

He said that although there is no research funding or collaborations on this issue, it is a significant piece of Mexican-American history that deserves study and additional research.

He believes this research could be turned into a book.

“I have been surprised about how much I keep finding out. Since I published my first book, I now think a lot about another one, or the next one. I’ve got two other book projects going on right now, so who knows, this might be another one,” he said.