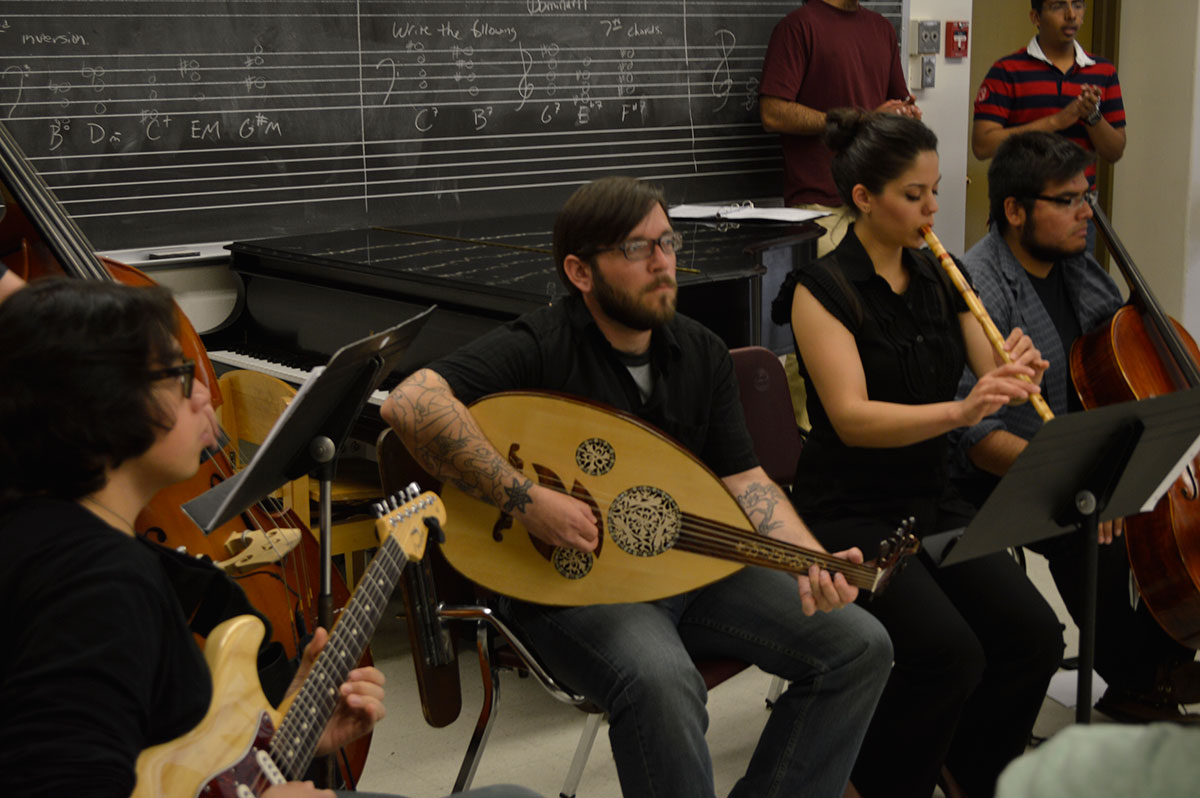 Senior Jecoa Ross plays the oud along with other students during Layali Al-Sham’s rehearsal. (Paul Reynoso/Borderzine.com)

EL PASO – On Friday afternoons in the practice room of the Fox Fine Arts building, a group of students rehearses for Layali Al-Sham, UTEP’s Arabic music ensemble. The ensemble primarily consists of UTEP students that sing and play Arabic music. The instrumentation of Layali Al-Sham includes a wide variety of Western Classical and Arab musical instruments such as the clarinet, electric guitar and the Egyptian flute called the ney. Senior Jecoa Ross plays the oud along with other students during Layali Al-Sham’s rehearsal. (Paul Reynoso/Borderzine.com)

Dr. Andrea Shaheen, assistant professor of ethnomusicology at UTEP and director of the school’s World Music Ensembles, said that the formation of the Arabic music ensemble began in 2010.

“It sort of fell into my lap in that there was this core group of three or four students that were really driven to learn,” Shaheen said. “From there, other students started to find out about it and asked to join and now it’s grown to a more than 20-piece ensemble.”

Shaheen said there are no pre-requisites of Arab music for students who want to join the ensemble but she does expect new recruits to have some type of musical experience.

“They do not need to know how to read sheet music as you would in other musical ensembles because we learn everything by ear,” she said. “However, they do need to have some type of music proficiency, whether it’s singing or playing an instrument.”

UTEP Senior Leslie Yapor, a commercial music major and lead singer for Layali Al-Sham, said that the experience of playing Arabic music for Dr. Shaheen’s ensemble has been rewarding. UTEP Senior Leslie Yapor sings during one of Layali Al-Sham’s practice sessions. Yapor is the lead singer for the ensemble. (Paul Reynoso/Borderzine.com)

“I get to perform authentic Arabic music which is something I always wanted to do as a young girl,” said Yapor. “It opens our eyes and ears as a community to a whole new world because Arabic music is a whole different world than Western music in terms of tonality, instrumentation, and performance practice.”

Yapor, who joined in 2010, added that there are certain elements that she looks forward to playing the most as a member of Layali Al-Sham. “I really like performing as an instrumentalist so I like the pieces where I get to perform with the ney or with the doumbek,” she said.

The doumbek is a goblet shaped drum that is part of the Arab percussion set of the ensemble and is prominently used in regions such as the Middle East, Northern Africa, and Eastern Europe.

Layali Al-Sham Musician Jecoa Ross, a senior history major, said it took some time to adjust to playing in the ensemble with the guitar and the oud, which is an Arab type lute shaped with a bent neck. Andrea Shaheen helps keep the ensemble focused during a Friday afternoon rehearsal. Shaheen has been director of Layali Al-Sham since fall 2010. (Paul Reynoso/Borderzine.com)

“They are both challenging because on the guitar you have your frets which are geared towards Western music and in Arabic music there are more notes than there are on the Western music scale,” Ross said. “Trying to hit those notes on the guitar, you basically have to bend the string just at the right point to get the right note and with the oud I just started learning that and so it’s a completely different instrument.”

Ross, who joined the ensemble shortly after taking an Arabic language course at UTEP, said he has noticed an increase in exposure and attention given to the group. “I remember the first year we started playing at a lot of little gigs in and around town,’ he said. “ Now that we’ve started doing UTEP events it’s like we had a large crowd waiting for our concerts, and now they all come.”

Currently, Layali Al-Sham is preparing for its April 28th concert at the Fox Fine Arts Recital Hall. According to Shaheen, the concert will also feature Arabic poetry put together by the Arabic language department and read by students. A 10 to 15-member Dabke dance team will also be prominently featured at the concert. Dabke is a traditional Arab folk dance that is common throughout the Levant region, which includes Lebanon, Israel, Syria, Palestine, and Jordan.

“We’re doing a mix of some very basic dabke steps and then some more very advanced choreographed staged dabke which has become very popular in the Arab countries, especially in the Levant region.” Shaheen said.

Percussionist Omar Limas, a recent UTEP Graphic Design and Drawing graduate, said that the audience will experience a unique cultural experience from Layali Al-Sham. “It’s going to be a lot of fun because we have a lot of new members, so it’s fresh, the sound is fresh, and it’s going to be good,” Limas said.

Limas said that the concert will not just have an impact on the El Paso community but on local residents of Middle Eastern ancestry. “In past experiences people have said that it brings the Middle East to El Paso for an hour or two and they go very emotional about it.” he said. “It’s very cool to have that interaction with the people.” Arabic music, dance and poetry will highlight Layali Al-Sham’s upcoming concert including pieces from Umm Kulthum, an internationally famous Egyptian singer from the 1930’s to the 1970’s.

Shaheen said that the future for Layali Al-Sham bodes well and she hopes to provide UTEP students and the El Paso region more opportunities to hear Arabic music in the fall semester and beyond.

“We’ve got many incredible performers that I hope continue to learn and perform Arabic music because I think they could bring a lot of beauty to a lot of people,” she said.

General Admission tickets for Layali Al-Sham’s April 28th concert cost $5 and $3 for military personal and can be purchased through Ticketmaster. UTEP students get in free with a proper school ID.

Born and raised in El Paso. Graduated from Eastwood High School. I am currently a senior at UTEP majoring in multi-media journalism and minoring in history. I am an avid sports fan, especially when it comes to the UTEP athletics, the NFL, and the NBA. Currently, I am interning for The Prospector and hope to use my experience from my journalism classes and sports knowledge to become an excellent sports writer.