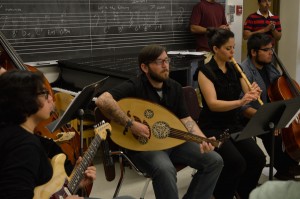 Arab music ensemble brings the Middle East to the border

EL PASO – On Friday afternoons in the practice room of the Fox Fine Arts building, a group of students rehearses for Layali Al-Sham, UTEP’s Arabic music ensemble. The ensemble primarily consists of UTEP students that sing and play Arabic music. The instrumentation of Layali Al-Sham includes a wide variety of Western Classical and Arab musical instruments such as the clarinet, electric guitar and the Egyptian flute called the ney. Dr. Andrea Shaheen, assistant professor of ethnomusicology at UTEP and director of the school’s World Music Ensembles, said that the formation of the Arabic music ensemble began in 2010. “It sort of fell into my lap in that there was this core group of three or four students that were really driven to learn,” Shaheen said. 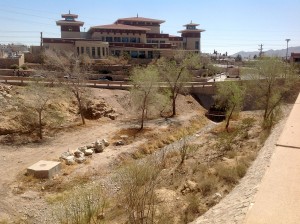 EL PASO — Major changes are well under way at the University of Texas El Paso as the campus two-year pedestrian and environmental friendly transformation project takes shape. The landscape of the campus features an arroyo that runs primarily from the northeast side of campus near Miner Village down to the southwestern side by the Business Administration Building. This arroyo will be one of the focus points of change during the project. The project falls under UTEP’s master plan to dramatically improve the campus for the UTEP community and the students. There are seven segments of the transformation project such as pedestrian friendly pathways and additional green spaces. 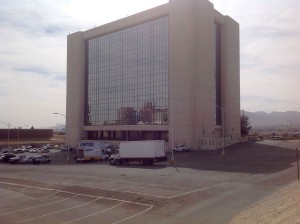