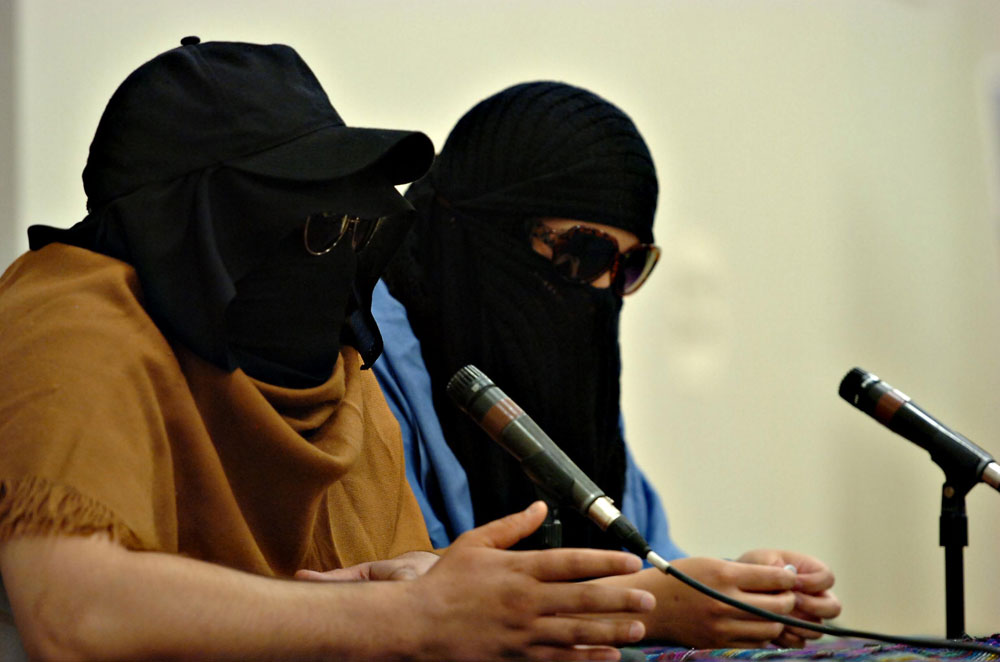 Juarez couple narrates torture at the hands of officers from the Mexican Federal Police. (Francisco Alarcón/Borderzine.com)

EL PASO – A Juarez woman together with her husband affirmed in an immigration and political asylum forum that she was tortured and threatened by death by Mexican Federal Police.

“Although we are safe and are still alive, we are nobody here,” she said before a hundred or so people while her face was covered by a black cloth to protect her identity. She spoke here Friday, April 27 at the Multi-Use Center of Saint Patrick’s Cathedral hosted by Annunciation House, an organization that offers refuge for immigrants and political exiles.

“We sacrificed a lot to achieve our careers in Ciudad Juárez, and they (a group of federal policemen deployed to our sister city) destroyed them in minutes,” she said fighting her tears.

The couple, whose names and faces remained anonymous for security reasons, fled Juarez City and took refuge in El Paso when some alleged agents from the above agency “picked them up” on two occasions.

“I was leaving my job and going for my wife at her job when I was stopped on the way by some federales, they took my car, my money, and left me with nothing,” said the man, who was a student and an engineering worker.  His wife worked as a professional nurse and paramedic.

“I went and denounced the agents with the National Attorney General [PGR: Procuraduría General de la República], with Human Rights, and directly to the Federal Police. I identified them and they were disarmed, but it was all a farce because they did nothing to them,” he asserted. For him and his family the nightmare was just beginning.

After his filing his complaints the man received a series of threats wherein his possible aggressors assured him they knew all about him, his residence and place of work, and that he had “no idea who he was dealing with.”

Two months after his first complaint, and a little before he had to ratify it for the case to continue against the federal agents, the man was “picked up” along with his wife and son.

“There were several of their vans; they separated me, my wife and my son. In the back part of the truck they beat me, they tied me to a pipe, handcuffed me, covered my head with tape and a plastic bag; they hit me in the chest and ribs, they stuck needles into my nipples, he said visibly shaken behind the black cloth and dark glasses.

The man asserted that his captors threatened him by telling him they were going to kill his wife and son, and for around six hours they kept torturing him in that vehicle. “Then they showed me some shovels and told me that they were for digging some holes to bury us,” and he couldn’t go on.

His wife took over and explained they were later taken to a secure house where they told her to fill a tub with water for her husband to put his feet in. “They kneeled me in front of him and began to electrocute him and torture him some more”.

The so-called federal police ordered her to collect 50,000 pesos to let them go. After running around Juarez to gather the money, she was taken to a vacant lot where they let her take her badly beaten husband.

“That night they told me that they would be by for us at 8:00 AM so that we could withdraw our complaint. If we refused, next time they would pick us up to kill all three of us,” she sobbed.

The family fled to this city and asked for political asylum from US authorities, “but they treated us as if we were guilty. We never did anything to anyone; we were not involved in crime. I was a paramedic, my husband did honest work, and they took everything from us.”

At that moment of their testimony the couple hugged and cried in silence in front of more than a hundred people and was unable to continue to tell their experience. Up to now, they find themselves waiting to get their political asylum.