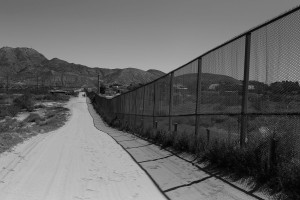 WASHINGTON, D.C. – When President Barack Obama delivered the fifth State of the Union address of his presidency, he dedicated just three sentences to immigration reform. Not once did he mention the contributions or needs of Latinos, nor did he touch on his administration’s handling of deportations. Most of his proposals won applause from Democratic members while the majority of the Republican Party sat in silence. They did the same when the president said “…and fix our broken immigration system.”

The call for humane immigration reform resonates with my Hispanic heritage

SUNLAND PARK, NM – I attended the Solidarity Prayer Service held September 7 here at the border fence that separates Mexico from the U.S. at end of Anapra Road organized by local catholic churches. Marchers came to both sides of the fence. It was heart wrenching to see the small children standing at the fence. They told me they hoped to be able to come to El Paso one day. We should be building bridges not walls.

Catholics gather at the U.S.-Mexico border fence to pray for fair and humane immigration reform

Lea esta historia en español. SUNLAND PARK, NM – With their fingers sticking out through the chain-link border fence from the Mexican side, Johan 10, and his brother Irving, 11, squint their eyes against the penetrating afternoon sun to make out the people who drive up on this side of the fence. About 150 members of area Catholic congregations and the bishops of Ciudad Juarez and El Paso gathered on Saturday, September 7th along the fence that separates two countries in the neighborhood region of Anapra to pray for immigration reform. With leaders of the dioceses of Ciudad Juarez on the other side, and the dioceses of El Paso, Nuevo Laredo, Matamoros, Brownsville, San Angelo, Piedras Negras and San Antonio on this, the U.S. side, the Catholic community showed its support for immigrant human rights by gathering for a solidarity prayer on the border desert. Nuevo Laredo bishop, Gustavo Rodriguez Vega, and archbishop of the San Antonio archdioceses, Gustavo Garcia-Siller, conducted the prayer and said the purpose of the event was to acknowledge the necessity for an ample and fair immigration reform, according to the teachings of the Catholic society. 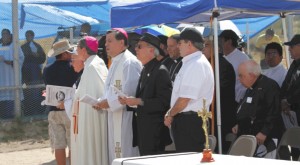 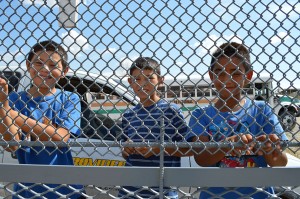 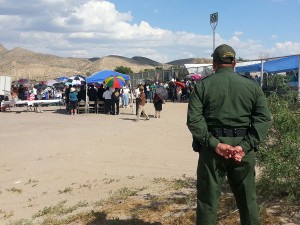 SUNLAND PARK, NM – Growing up in El Paso allowed me to journey through many different walks of life. If you live here long enough, you get to experience different cultures. If you stay long enough, you will begin to understand them as well. I attended a gathering at the Anapra fence right on the borderline Sunday, organized by Catholic bishops from border dioceses in Texas, New Mexico and Mexico to pray for immigration reform. People of the Catholic faith gathered on both sides of the border to pray for those who have experienced oppression and hardship while immigrating to the U.S. from Mexico and other Latin American countries.

Compassion undermines the border-wall of separation

And maybe what they say is true
Of war and war’s alarms,
But oh if I were young again
And held her in my arms
– William Butler Yeats, Politics

When Ghandi decided to protest the salt tax (unfair because it affected the poor more than the rich – they’d lose salt from sweat, and need to consume more) he walked 240 miles to the ocean. He would get his own salt. It was on the beaches, already his, part of the eternal harmony between humans and the earth. I imagine him on the coast, overwhelmed by the radiance of the light bouncing between the water, sky, and shore. He picks up a tiny lump of salt.

This Saturday, people from Juarez, El Paso, or elsewhere (myself an east-coaster, studying at UTEP) joined together in solidarity at the border fence, just off Sunland Park Drive. Gandhi’s march and the event at the fence are both expressions of a solidarity that underlies our species.

SUNDLAND PARK, N.M. — Without crossing the U.S.–Mexico line, demonstrators from the two nations gathered January 29 on both sides of the border fence at Anapra on the Mexican side and Sunland Park on the U.S. side to rail against the violence in Juarez that has killed thousands in the past four years. The drug-spawned violence has moved the El Paso community to take a stand along their neighbors to show that the city under siege is not alone. “No more spattered blood. No más sangre,” they shouted. The chants for peace and justice on each side of the border pervaded the atmosphere that Saturday morning.