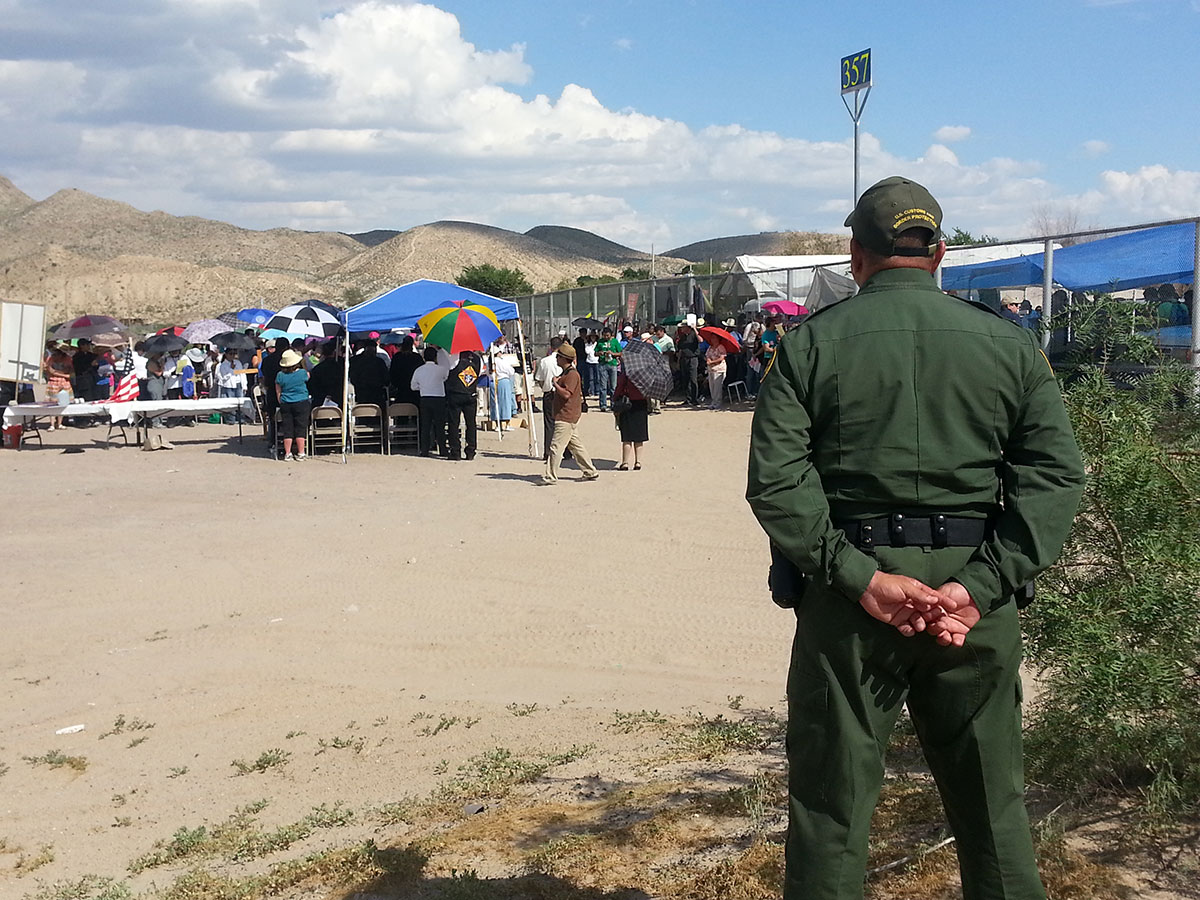 SUNLAND PARK, NM – Growing up in El Paso allowed me to journey through many different walks of life. If you live here long enough, you get to experience different cultures. If you stay long enough, you will begin to understand them as well.

I attended a gathering at the Anapra fence right on the borderline Sunday, organized by Catholic bishops from border dioceses in Texas, New Mexico and Mexico to pray for immigration reform. People of the Catholic faith gathered on both sides of the border to pray for those who have experienced oppression and hardship while immigrating to the U.S. from Mexico and other Latin American countries.

Immigration is one subject that unsettles people. Everyone has an opinion, yet discussing reform is always difficult. However, it needs discussion because it affects the lives of so many, especially in border cities where families are broken, futures are blurred, and freedom isn’t granted to all.

The topics discussed, and the prayers spoken next to the border fence reminded me of how broken our world truly is. A family’s future is based on which side of the border they come from. I felt sadness and empathy for those who have experienced cruelty and oppression while chasing the “American dream.”

Many stories were told including one of a lady named Rosa. She immigrated to the United States 10 years ago from Mexico to seek a better life for her children and escape the terror of the drug war. Two years ago in the process of becoming a U.S. citizen, her son, who was still living in Mexico was shot and killed in crossfire in the street. She went back to Mexico to attend his funeral, but upon her return to the U.S. she was arrested and incarcerated for not having legal status.

I don’t think people realize the oppression many immigrants from Mexico go through.  Yes, some eventually qualify for living assistance, but the idea that they are here for handouts – which is absolutely wrong – ends up affecting all Hispanics, even non- immigrants.

My experience can’t compare to that kind of suffering, yet I feel that it serves as a good example of how any Hispanic is affected by the misconceptions held by many Americans.

I didn’t grow up speaking Spanish. In fact, I lived in a very “Americanized” household though it was in a predominantly Hispanic community. I began to understand and speak Spanish as a teenager. My mother married my stepfather who had migrated to the U.S. from Chihuahua, Mexico in 1998 when I was just eight years old, and the Spanish language and Mexican culture was introduced to my life. I came to understand the hardships that linger in the life of an immigrant through my stepfather.

At age 54, and having lived in the U.S. for nearly 18 years, he makes a living renovating houses. My stepfather does not have a retirement plan. Things were much worse when my parents decided to move to Austin. My mother climbed the ladder in her career, yet my stepfather could not find a job due to language barriers.

While still living in Austin, my family and I visited a health food store one day. We were the only Hispanics in the store. My younger cousin bumped into a lady’s cart by accident.  The older woman turned around and under her breath exhaled “damn wetbacks.”

That was the first time I was the object of a racial slur and I took offense. Yet traveling, especially in the Southern states, and especially with my stepfather, I experienced comparable comments or stares many times. Truth is, there is an unfair perception in this nation of Hispanics and immigrants from Mexico.

I’ve met many people who truly believe that immigrants from Mexico come to the U.S. and get a “free ride.” I feel that this particular viewpoint is especially common in El Paso due to the city’s culture. It’s a very unique place that shelters many different cultures and families, and I believe it is significantly different from other border cities in the U.S. in many different aspects.

Of course you have Ft. Bliss, which brings many families to the Sun City from all over the U.S. We also have a very diverse Hispanic population. Like myself, there are many Hispanics who grew up in the U.S. and grew up in a Latin American culture, and there are also immigrants who are also Hispanic, yet they grew up on the other side of the fence.

Politically, the question that many Americans ask is: is it our responsibility to aid people from another country due to the irresponsibility of another government? I understand this concept. As a country we are most definitely not in a good place to be taking citizens of other countries if they can’t carry their own weight.

However, immigration laws seem to mainly affect the U.S. Mexico border. One of my colleagues had the chance to speak to three young white women at the prayer service.  They were there in support of comprehensive immigration reform because they said they wouldn’t be U.S. citizens if their families hadn’t migrated from Italy. They also stated that they believed that Hispanic immigrants were treated significantly different from immigrants of other nationalities and are given more difficulties to immigrate. At the prayer service, you could feel the unity, faith, and hope of the souls that were there. The heat and burning sun didn’t keep those who have hope for reform from uniting at both sides of the border. Even there you could see the need from citizens on the other side.

Children from nearby homes stood at the fence to ask for change. “¿Tienes un dolar?,” one little boy asked me. “Puedes tomarme una foto si me traes un dolar,” I made a deal, and ended up giving him, and all his friends a few dollars. In exchange, I got a great photo, and a big smile.

This made me think very deeply. What is the answer? How do we change things so that Hispanics can feel comfortable in their own home in this country? So that immigrants that already came to the U.S. have security, and so that those who dream of a better life have a chance? How can we respect human rights and create a nation that is fair to all? I know it is possible to reform, but like the fight for Civil Rights of the 1960’s, it is going to take time.