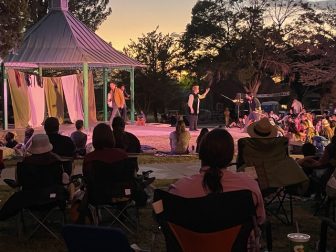 Madeline Park is a small neighborhood park in West El Paso near UT El Paso that is popular for its playground, basketball court  and old-time gazebo at its center. This fall, a UTEP theater professor was hoping it would also attract a crowd for a free festival with performances from a classic work of a not-so-modern playwright. https://soundcloud.com/borderzine-reporting-across-fronteras/2022-shakespeare-festival-in-madeline-park?si=b483695ba06e4c869ecd665ecb5bc2c9&utm_source=clipboard&utm_medium=text&utm_campaign=social_sharing

“I want it to be a magical introduction of theatre, to people, of Shakespeare to people who fundamentally go, ‘oh my gosh Shakespeare that sucks right?’ and they’re gonna come to this and they’re gonna go ‘that was really fun,'”  said Jay Stratton, an assistant professor of theater and dance at UTEP. Stratton says he took the idea of doing a family-friendly Shakespeare play in Madeline Park to El Paso’s Shakespeare on the Rocks organization, which has been putting on shows since the late 1980s.