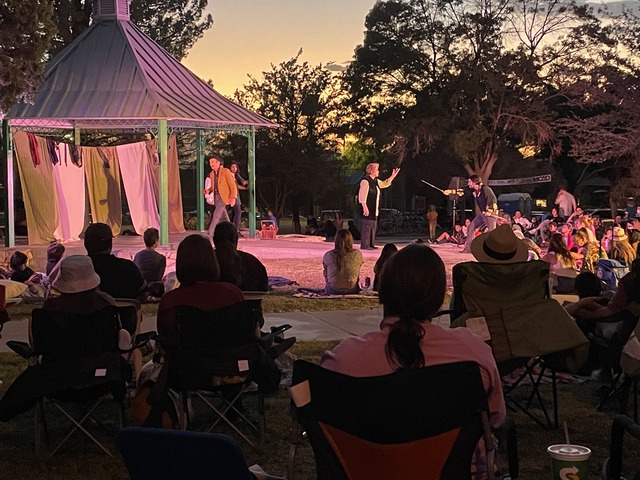 Photos like this one posted on the UTEP theater department Facebook page show a good crowd turned out for the 2022 Madeline Park Shakespeare Festival.

Madeline Park is a small neighborhood park in West El Paso near UT El Paso that is popular for its playground, basketball court  and old-time gazebo at its center. This fall, a UTEP theater professor was hoping it would also attract a crowd for a free festival with performances from a classic work of a not-so-modern playwright.

Stratton says he took the idea of doing a family-friendly Shakespeare play in Madeline Park to El Paso’s Shakespeare on the Rocks organization, which has been putting on shows since the late 1980s.

“They said, ‘knock yourself out’ and now here we are,” he said.

The Madeline Park ShakespeareFestival performed As You Like It, a comedy of love and mistaken identity. It ran in late September and early October. Stratton said there were a number of people involved in making the show happen.

“There is a cast of nine; there is a stage manager. Then there are a handful of technicians. There is one costume person. There is a set and props designer. There’s myself, there’s the executive director of Shakespeare on the Rocks, and then there’s all the donors, which is substantial. That list is up there around thirty or forty people,” he said.

Stage manager Sydney Monroe Gaglio says putting on a show in a public park can bring some challenges.

“There are kids playing, there are people practicing, we’ve got Cub Scouts that are rehearsing sometimes, we once shared the gazebo with some folks doing ballroom dance,” Gaglio said.

Stratton says the play isn’t the only thing at this festival.

“We’ve got a market we’ve got a juggler we’ve got entertainment; the opera is gonna come and sing before the show on some nights. On other nights we’re going to have a Capoeira group doing demonstrations,” he said. “So, there’s a lot of moving parts to it.”

Isaac Hames is a UT El Paso student majoring in Organization and Corporate Communication with a Theater minor.