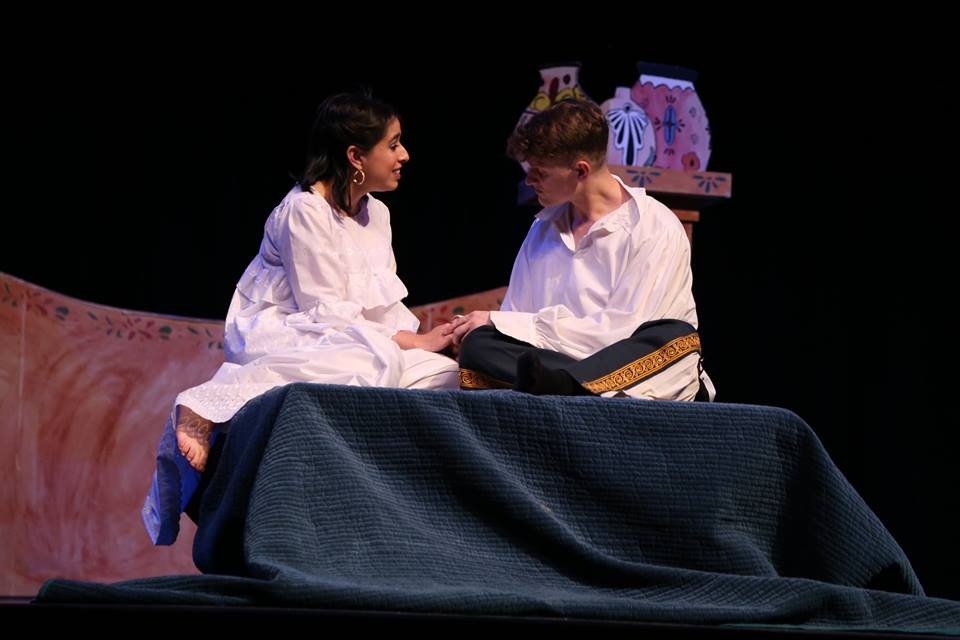 Lluvia Almanza (Julieta) and Johnathan Cantrell (Romeo) in an earlier touring production of "Romeo and Julieta" in Cd. Juarez in February. The production was set on the US/Mexico border in the 19th century, with Romeo wearing charro pants and the setting is a hacienda. Photo courtesy Shakepeare on the Rocks Producer David Mills. Photo credit: Photo courtesy of Shakepeare on the Rocks Producer David Mills.

For bilingual, bicultural border cities like El Paso, Texas and Ciudad Juarez, Chihuahua, the story of two lovers whose miscommunication leads to their tragic death does not sound far fetched.

Although Shakespeare’s plays were originally written in English, many, like Romeo and Juliet and Othello, have been performed all over the world in bilingual fashion to attract a broader audience.

For this year’s 27th season of the local acting company, “Shakespeare on the Rocks,” Artistic Director Hector Serrano directed for the second time a bilingual version of Romeo and Juliet at the binational Chamizal National Park near downtown El Paso.

The bilingual Romeo and Julieta play embodies the mission of The Chamizal, which commemorates the diplomatic negotiation between the United States and Mexico through the Chamizal Treaty.

This new treaty, which ended a border dispute over land in 1848 when the Treaty of Guadalupe Hidalgo established the Río Grande River as the international boundary, negotiated the borderline because the river had naturally moved leaving Mexico with less land than was originally granted in the 1848 Treaty.

With The Chamizal’s mission to preserve culture, a bilingual play encompasses both of the cultures and languages that are prevalent in the borderlands.

Formally titled Romeo and Julieta, company actor Jesse Snyder pieced together a Renaissance Spanish manuscript and a 16th century English language script of the play to create a new production in English and Spanish. The bilingual play first appeared on the Chamizal theater stage in 2013, and again this year.

Snyder, who also teaches Japanese at the Alicia R. Chacon International School, said the biggest challenge with creating the dual-language script was finding an appropriate Spanish translation for the play.

Along with shortening the play to an hour and half, he incorporated the two languages by having each family speak mono lingually. The Capuletos speak Spanish Only and the Montagues speak English Only. They have trouble communicating. But Julieta and Romeo communicate just fine, in English.

Synder believes the essence of bilingual adaptations like Romeo and Julieta are popular in the borderlands where many residents are bilingual and can therefore understand dialogue in both languages.

“El Paso lends itself to these types of plays because we have that bilingual talent that not many other places have,” said Snyder, explaining it’s rather easy to recruit bilingual actors here compared to many other locations across the country.

Over the last two years, Romeo and Julieta has toured in both El Paso and Ciudad Juarez, amplifying the local rather small Shakespeare fan base.

Originally inspired by the Broadway revival of West Side Story, which is a modernization of Romeo and Juliet, Snyder’s bilingual script allows El Pasoans and Juarenses to identify themselves with the monolingual characters from different families who don’t understand each other. Unlike the common use of Spanglish that happens in the border, the Shakespearean characters speak in strictly Renaissance Spanish and English.

According to The Telegraph, a U.K. newspaper, an acting company in China has been trying to implement a similar bilingual approach for Shakespeare’s Othello by retaining original key scenes in English but using a Beijing dialect for the rest of the play.

The beauty of Shakespeare’s plays lies beneath his play on words and often times those double entendres are difficult to translate, which is why many hesitate over the idea of translating Shakespeare’s original works. However, some Shakespearean scholars argue that Shakespeare’s plays have lasted through centuries because they portray everyday issues.

“While I was studying Shakespeare, my mentor said that if Shakespeare were to come back he would ask for two things. One, he would ask for his money and two, he would ask why we haven’t evolved,” said Claudia Rodriguez, who received a master’s degree in English from The University of Texas at El Paso, and focused her dissertation on Shakespeare. She has even taught Shakespeare classes in high school.

“I love the idea, I think its great,” she said. “If you’re having trouble with your parents, there’s King Lear, Romeo and Juliet, As You Like It, Hamlet. If you’re having relationship problems, once again there’s Romeo and Juliet. Shakespeare’s plays continue to be performed because they embody the human experience,” said Rodriguez.

Rodriguez recalled an adaptation of Macbeth titled uMabatha, a 1970’s play which criticized the South African government at the time and was performed in tribal Zulu. The idea of this play written by Welcome Msomi, was to introduce the idea of Shakespeare’s Macbeth to a society that was illiterate and living under a corrupt government.

Serrano said he believes that “if the translators know what they are doing and know how to alter the sentences, the essence of Shakespeare is not lost.”

Other Shakespeare lovers like Snyder believe that adapting a play to a local group’s language will attract that particular audience, which may not have been interested in Shakespeare before.

Snyder and Serrano say Romeo and Juliet is a perfect platform for a bilingual setting, but other plays such as Othello, a play that deals with racial and class distinctions, could also be adapted in bilingual form.

Shakespeare on the Rocks will perform Romeo and Julieta at The Chamizal one last time this year. The date hasn’t be selected yet. A decision to potentially direct a Spanish and English version of Taming of the Shrew, another Shakespeare play, in 2017 is still pending.

Previously, the group performed an English-language version of Taming of the Shrew, but set in 1800’s California instead of Italy as in the original.

Because of The Chamizal Park’s mission to preserve U.S. and Mexican culture, Shakespeare on the Rocks hopes in future seasons to perform at least one play in English and Spanish over two nights.

“The arts really need the support of the people,” Serrano said. “People should support any effort to keep our community unique, bilingual, bicultural, and binational.”