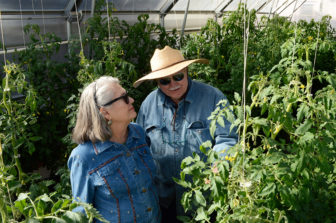 When Jerry Hobson retired in 2010, he and his wife, Susan, got to work on a plan to turn some old family farmland into a garden of fresh produce for people in need. “We were here with land, water, time, and some nickels and dimes and it was like someone was saying: ‘You kind of have it pretty good, maybe it’s time to share that and give back,’ ” said Jerry Hobson, 74, who retired after a career as a chemical engineer with El Paso’s Chevron Refinery and El Paso Natural Gas. The farm, located south of La Union, NM, near Canutillo, Texas, has been part of his family for a hundred years. Over time it was divided among Hobson’s family members. The three acres that belong to Jerry and Susan Hobson is now known as Jardin de Milagros and provides truckloads of fresh vegetables to area food pantries.

Ruidoso’s peak season a bust as tourism from Mexico, Texas collapses over coronavirus

RUIDOSO, NM — In this town where tourism is one of the biggest sectors of its economy, not having visitors can become a real problem. Ruidoso has experienced a huge drop in tourism because of COVID-19 concerns beginning with spring break, one of the village’s busiest times of year after the winter season. We actually haven’t been seeing a lot of tourism at all,” said Juan Sosa, a sales clerk at clothing store Parts Unknown in mid-March. That’s when the casinos, racetrack and ski resort saw a drop off in visitors before they closed down completely. “It’s affected the town as far as tourism quite a lot,” Sosa said.