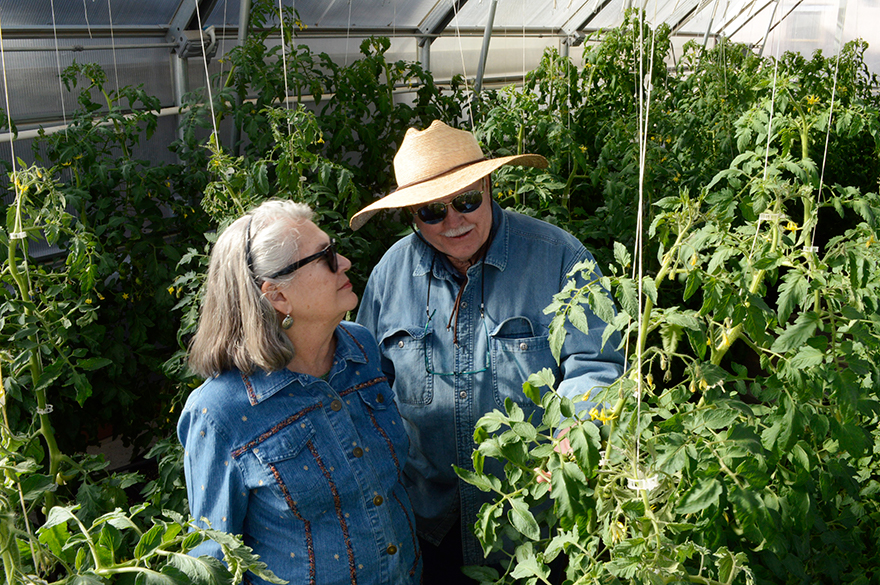 When Jerry Hobson retired in 2010, he and his wife, Susan, got to work on a plan to turn some old family farmland into a garden of fresh produce for people in need.

“We were here with land, water, time, and some nickels and dimes and it was like someone was saying: ‘You kind of have it pretty good, maybe it’s time to share that and give back,’ ” said Jerry Hobson, 74, who retired after a career as a chemical engineer with El Paso’s Chevron Refinery and El Paso Natural Gas.

The farm, located south of La Union, NM, near Canutillo, Texas, has been part of his family for a hundred years. Over time it was divided among Hobson’s family members. The three acres that belong to Jerry and Susan Hobson is now known as Jardin de Milagros and provides truckloads of fresh vegetables to area food pantries.

Food insecurity on the rise

The Kelly Center for Hunger Relief in central El Paso is one of the largest food pantries in the city and was serving about 7,000 El Pasoans every month before the coronavirus pandemic hit. Now, a spike in layoffs after businesses closing down has increased the need to provide service to even more families who would otherwise be going hungry.

“Jardin de Milagros is an important component of the work we do at Kelly, because it provides fresh produce to our clients. Fresh and nutritious food, much fresher than they’d get anywhere else,” said Warren Goodell, Executive Director of Kelly Center for Hunger Relief. “It really supports our work to provide only healthy food to those people in need for El Paso. We want not only to provide food to address hunger, but to provide food to address health.”

The Hobsons currently grow 12 different kinds of vegetables throughout the year. Their most requested crop is jalapeños, followed closely by calabazitas, also known as Mexican squash.

They are always trying to come up with new ways to garden and to cultivate new crops. They are currently working on growing jumbo jalapeños that they believe are going to be very popular among the clients at the Kelly Center.

Jardin de Milagros strives to be an environmentally conscious organization. They try to not use pesticides. They compost what is left over after the harvest. And, unlike farms dependent on irrigation allotments, they have control over their water use since they have a well on the land.

The only regular staff at the farm are the Hobsons and two other workers who are paid either by donations or with the couple’s own money, if need be. Mostly, the garden relies heavily on volunteers to help.

The volunteers range from students from area schools, to college students and sometimes volunteers from the Kelly Center. Some volunteers also come from religious groups.Other times people just show up to see how they can help.

“It’s been a very enjoyable type of activity. We make lots of friends,” said Susan Hobson, 73. “We educate them about how to grow vegetables, they make friends with the vegetables and understand where their food has come from and understand how it develops and have a greater appreciation of the food that they eat.”

Since the spread of the novel coronavirus has led to the need for people to stay home, Jardin de Milagros has been trying to get by with fewer volunteers.

“We’ve had families out here and students, we’ve had national guard people come out and do work for us, and we just obey the rules, you know, stay six feet apart, wear a mask if we have to get closer,” Susan Hobson said.