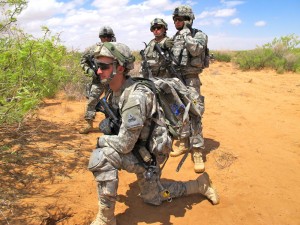 ALEJANDRA MATOS (Reporter): Riding in a military Stryker with a group of soldiers was not something that Kristian Hernandez imaged he would ever be doing as a college journalism student. But on the morning of May 8, he and several other UTEP students experienced what it is like to be an embedded reporter with the military, as part of a training program on Ft. Bliss designed to train soldiers who will be deployed to Afghanistan later this year. KRISTIAN HERNANDEZ: “It’s a unique experience. We get to go into Ft.

Editor’s note: This is another in a series of El Pasoans sharing their favorite places in El Paso. A series that we named Mi querido El Paso. This time our guest is writer and publisher, Lee Byrd. 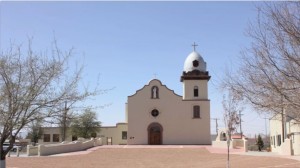 Editor’s note: This is another in a series of El Pasoans sharing their favorite places in El Paso. A series that we named Mi querido El Paso. 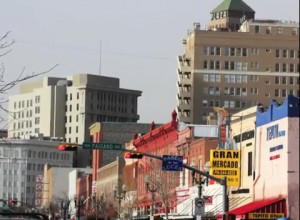 Editor’s note: This is another in a series of El Pasoans sharing their favorite places in El Paso. A series that we named Mi querido El Paso.

Dancing man scares drivers on I-10

El Paso — When Patricia Vega headed to work Thursday morning in her navy blue Ford Explorer, she never imagined she would be the stage for a ballerina dance spectacle in the middle of Interstate 10. “I saw traffic started slowing down near Hawkins, so I hit the brakes when all of a sudden what I thought was a woman came running towards my car with her hands extended out telling me to stop,” said Vega, who works at the University of Texas at El Paso. “All of a sudden the person jumps on my windshield and I can hear her walking around on the top of my car.”

The person was actually a man, dressed in a tutu and tights. “I just thought, ‘my God what is this person doing,’” Vega said. “He was dancing around like Shakira.”

Worried that she would run the man over, Vega slowed down.

8:37 A.M.: Day two of the ASNE/IAPA Summit has started. First panel is entitled The Role of the Mexican Government. The panelists are Gustavo Salas Chavez, Special Prosecutor for Crimes Against Freedom of Expression, Mexican Attorney General’s Office and Raul Plascencia Villanueva with the Human Rights Commission. The moderator is Eric Olson, Senior Associate for Security Policy. 8:41 A.M.: Villanueva is not present.

2:09 P.M.: Conference has started. Andres Gyllenhall, Vice President of News and Washington for McClatchy Newspapers and Alfredo Carbajal, Managing editor of Al Dia, Dallas Morning News welcoming attendees. 2:11 P.M.:  There are about 40 people in attendance. 2:12 P.M.: Angela Kocherga, Border Bureau Chief will now present a video from the El Paso/Juarez region. 2:13 P.M.: The video is a feature on journalists who report from the violence-stricken city.

As the sun rises over the nation’s capital, Charlie Ericksen takes the elevator down from his seventh floor apartment to his office on the first floor. In that office on N Street, Ericksen is touching the lives of aspiring journalists and changing the way mainstream media covers the Latino community. Ericksen, 80, is the managing editor and founder of Hispanic Link, a syndicated bilingual news column published by dozens of news outlets nationwide. He founded the Link in 1980 because he felt the Latino community was not getting adequate coverage and opportunities from other news outlets. In 1979, there were three Puerto Rican reporters nationwide, according to Ericksen. Many issues, he said, were seen from the perspective of “black and white,” and mainstream media rarely covered stories that affected Latino residents.

COVERAGE OF LATINOS
Although the Hispanic community is receiving news coverage in major media outlets, the information listeners and readers receive is often “event-driven,” with Hispanics just one of many elements. An analysis by the Project for Excellence in Journalism and the Pew Hispanic Center covering Feb. 9-Aug. 9, 2009, found that 18% of the stories studied (645 out of 34,452) “contained substantial references to Hispanics. The nomination of Sonia Sotomayor to the U.S. Supreme Court gained the most news coverage, followed by the Mexican Drug War, H1N1 outbreak and Immigration.

TOUGHER ACTION SOUGHT
The Society of Professional Journalists has issued a letter to several U.S. and Mexican officials demanding stronger measures to ensure the safety of journalists in Mexico. Since 2000, 59 have been killed in that country. The drug wars there claimed 2,600 lives in 2009, by official estimates. SPJ president Kevin Smith and its international committee chairwoman Ronnie Lovler wrote to U.S. Secretary of State Hillary Clinton, Mexico’s ambassador to the United States Arturo Casamitjana, and other officials, noting that as the violence increases, so does fear-motivated self-censorship. Editors and reporters from newspapers in Nuevo Laredo and Cuidad Juárez informed SPJ that they no longer publish articles “beyond what’s on the police reports.”

The complete letter and an accompanying news release can be found on SPJ’s website: www.spj.org.

Reporters’ Lives — and Deaths — on the Mexican Border

EL PASO, Texas — With the constant violence in Mexico has come an increase in reporting about the ongoing drug war in Ciudad Juárez, the neighboring metropolis across the border. In 2009, more than 2,600 people were killed there. El Paso Times Editor, Chris López, has dedicated himself to following the turmoil ever since he joined the paper in 2009. “This is one of the most dynamic stories on the border — and in the country,” he insists. El Diario de El Paso, the sole Spanish-language newspaper here, also sees the importance of reporting on it because readers often have direct ties to Juárez and other parts of Mexico.

Students Employed on Campus Have Better Chances of Success

EL PASO – Students working as staff at the University of Texas at El Paso are teaching their counterparts in Melbourne, Australia, a thing or two about working where they study. Daniella Nevarez stands in front of 30 of her fellow students and begins to show them how to use a webpage-design program, as well as video and audio editing software. But this is not a class presentation. It’s her job. According to the UTEP Budget office, Nevarez is one of 2,209 students employed at UTEP.

Borders Are What You Make Them to Be

EL PASO — A year ago I was told I couldn’t get an internship because I was too young. I was a freshman at the University of Texas at El Paso, and interns should be junior or upcoming seniors. That day I made a decision that my age, or should I say lack of, was not going to limit me. I was not going to let my age become the border that would stop me from getting where I wanted to be. I’ve been a reporter since I was a freshman in high school, and the idea of not writing when I got to UTEP seemed crazy.

Sam Donaldson to Young Journalists: The future is Multimedia

EL PASO—At the start of cybertime, back when 56K Internet speed was the norm, Sam Donaldson was at the forefront of multimedia journalism. Now, 10 years later, when high speed Internet is transforming journalism, Donaldson is encouraging prospective journalists to join the revolution. The legendary ABC newsman visited the University of Texas at El Paso Nov. 2, to announce the addition of the Multimedia Journalism Degree, which will enable students to gain multifaceted experience in the field. “This degree will enable you, and this university, to be in the forefront of looking at all these different platforms. At this university you will look at radio television, the Internet, print and look at all the ways you can communicate,” Donaldson said.

“If you are truly committed to your craft and you lost your job yesterday or today or are going to lose your job tomorrow, don’t give up. You don’t need a TV station or a newspaper to do journalism. You can do it on your own.”

On the track to tier one

The race to become the next tier one university in Texas has begun for seven emerging research universities now that Governor Rick Perry has signed Texas House Bill 51.

Just go for it: UTEP alum won’t take “no” in pursuit of her love for journalism, graduates from Georgetown U this summer

“They told me they rather give the [internship] to someone who was in print media,” Peña said. “That makes me mad. When someone tells me I cannot do something I have to do it.”